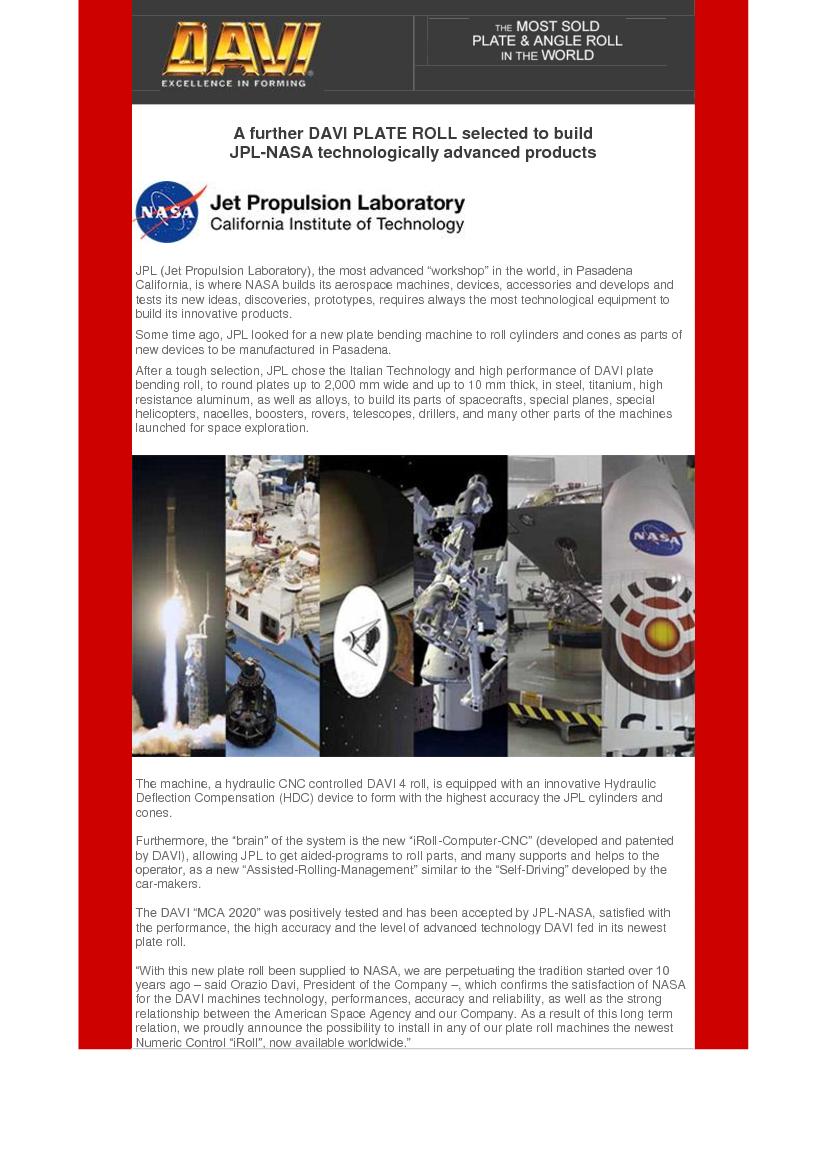 1 A further DAVI PLATE ROLL selected to bu
A further DAVI PLATE ROLL selected to build JPL - NASA technologically advanced products JPL (Jet Propulsion Laboratory), the most advanced “workshop” in the world, in Pasadena California, is where NASA builds its aerospace machines, devices, accessories and develops and tests its new ideas, discoveries, prototypes, requires always the most techno logical equipment to build its innovative products. Some time ago, JPL looked for a new plate bending machine to roll cylinders and cones as parts of new devices to be manufactured in Pasadena. After a tough selection, JPL chose the Italian Technology and high performance of DAVI plate bending roll, to round plates up to 2,000 mm wide and up to 10 mm thick, in steel, titanium, high resistance aluminum, as well as alloys, to build its parts of spacecrafts, special planes, special helicopters, nacelles, boost ers, rovers, telescopes, drillers, and many other parts of the machines launched for space exploration. The machine, a hydraulic CNC controlled DAVI 4 roll, is equipped with an inn ovative Hydraulic Deflection Compensation (HDC) device to form with the highest accuracy the JPL cylinders and cones. Furthermore, the “brain” of the system is the new “iRoll - Computer - CNC” (developed and patented

2 by DAVI), allowing JPL to get aided -
by DAVI), allowing JPL to get aided - progr ams to roll parts, and many supports and helps to the operator, as a new “Assisted - Rolling - Management” similar to the “Self - Driving” developed by the car - makers. The DAVI “MCA 2020” was positively tested and has been accepted by JPL - NASA, satisfied with the performance, the high accuracy and the level of advanced technology DAVI fed in its newest plate roll. “With this new plate roll been supplied to NASA, we are perpetuating the tradition started over 10 years ago – said Orazio Davi, President of the Company – , which confirms the satisfaction of NASA for the DAVI machines technology, performances, accuracy and reliability, as well as the strong relationship between the American Space Agency and our Company. As a resu lt of this long term relation, we proudly announce the possibility to install in any of our plate roll machines the newest Numeric Control “iRoll”, now available worldwide.” The new 4 roll DAVI inside the JPL - Nasa workshop in Pasadena - California with a successfully rolled part, at th e right, on the floor. www.davi.com | View in browser If you do not want to receive future communications, please notify us by e - mail: remove@davi.com

D A VI MCB : 4 ROLL WHY CHOOSING A 4 ROLL ? 1) The flat end is the shortest (excellent prebending)thanks to the two central rolls that can take the edge tothe precise tangent clamp.2) Single Pass Seq

A set of steps combined to form a performance. Like a story it needs to flow from one trick to another. . We learned many skills that can be used in the routine. Lets think of them all!!!. Rolls. Forward Roll.

Build your own Habitat T

Roll Up, Roll Up

Rock and Roll Rock and roll

(often written as . rock & roll. or . rock 'n' roll. ) is a genre of popular music that originated and evolved in the United States. . during the late 1940s and early 1950s, primarily from a combination of African-American genres such as blues, jump blues, jazz, and gospel music, together with western swing and country music. Though elements of rock and roll can be heard in blues records from the 1920s and in country records of the 1930s, the genre did not acquire its name until the 1950s..

ROLL CALL: The Clerk called the roll and determined the following: .

Why do we care about plate boundaries?. Plate Boundaries. Volcanoes and earthquakes most often occur where tectonic plates come together.. At plate boundaries, many other geologic features, such as mountains and rift valleys, can also occur..

How to make a kneeling roll

Kneeling Roll Pieces. The material needs to be a heavy canvas. . Cut one for the Roll (blue). and two for ends (red).. Sewing the Roll. Using a ½” seam, sew the ends of the blue together. Sew this twice to prevent the seam from splitting..

Roll of Thunder, Hear My Cry

AUGUSTSPORT AEROBATICS Actually, in the aerobatic world there are four different kinds of rolls. Each one is flown quite differently from the others. One of the four is the aileron roll. There are a