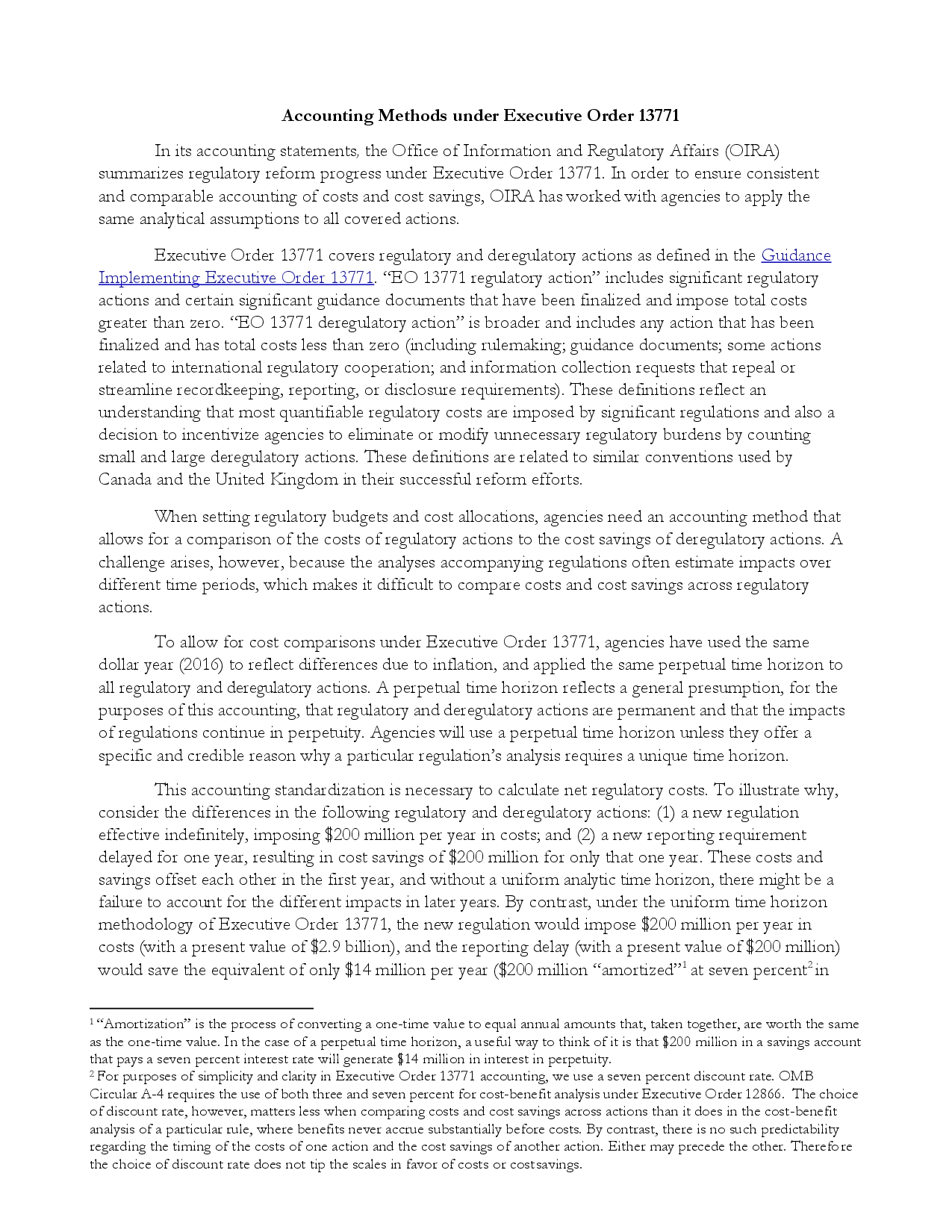 By JAMES and E

2 d” 1 at seven percent 2 in 1
d” 1 at seven percent 2 in 1 “Amortization” is the process of converting a one - time value to equal annual amounts that, taken together, are worth the same as the one - time value. In the case of a perpetual time horizon, a useful way to think of it is that $200 million in a savings account that pays a seven percent int erest rate will generate $14 million in interest in perpetuity. 2 For purposes of simplicity and clarity in Executive Order 13771 accounting, we use a seven percent discount rate. OMB Circular A - 4 requires the use of both three and seven percent for cost - b enefit analysis under Executive Order 12866. The choice of discount rate, however, matters less when comparing costs and cost savings across actions than it does in the cost - benefit analysis of a particular rule, where benefits never accrue substantially b efore costs. By contrast, there is no such predictability regarding the timing of the costs of one action and the cost savings of another action. Either may precede the other. Therefo re the choice of discount rate does not tip the scales in favor of costs or cost savings. perpetuity). This amortization accurately reflects that a one - time $200 million savings should not offset a regulation that costs $200 million each year. 3 Presentational materials for Executive Order 13771 may summarize impacts using both annualized and present values, which are standard economic concepts that represent different formats of the same information , and show values adjusted from 2016 to the current dollar year. Moreover, accounting u nder Executive Order 12866 and Executive Order 13771 may report different regulatory costs or cost savings. The Executive Orders serve different purposes: Executive Order 12866 analysis focuses on particular rules, whereas Executive Order 13771 considers c osts and cost savings across all qualifying rules. For all regulatory actions, agencies will clearly explain the underlying assumptions that may lead to the presentation of different reported values. 3 Cost and cost savings estimates are expressed equivalently in terms of the time value of money (a concept discussed in more detail in the “Discount Rates” section of OMB Circular A - 4). For purposes of OIRA’s Executive Order 13771 database, amounts are adjusted to their 2016 cost or savings equivalents using the seven percent discount rate. An ongoing cost of $200 million would therefore be expressed as $187 million (=$200 million/1.07) if first imposed in 2017 , $175 million (=$200 million/1.07 2 ) if first imposed in 2018 , or $163 million (=$200 million/1.07 3 ) if first imposed in 2019, and so forth into the future . Similarly, a one - time cost of $200 million, annualized over a perpetual time horizon to $14 million (=$200 million x 0.07), would be expressed as $13 million (=$ 14 million/1.07) if experienced in 2017 , as $12 million (=$14 million/1.07 2 ) if experienced in 2018 , or $1 1 million (=$14 million/1.07 3 ) if first imposed in 2019, and so forth into the future . Some status report materials, where noted, include estimates re ported as present - equivalents (e.g., 2018 - equivalents for Fiscal Year 2018 reporting or 2019 - equivalents for Fiscal Year 2019 reporting ) , which may be found by multiplying 2016 - equivalents by 1.07 T where T equals the number of years since 2016 .

That’s An Order A Guide to Executive Orders

Edward P. Richards, JD, MPH. Clarence . W. Edwards Professor of . Law. What is an Executive Order?. An order from the executive (President) to someone who cares out executive branch actions under the direction of the president..

�� 1 �� WHEREAS, section 93120.3(c)(1) of the ATCM requires that percent of the three months of routine quality control testing data an

CHONGQING HEYA TECHNOLOGY New Off-Road Small Spark-Ignition CO., LTD. CALIFORNIA AIR RESOURCES BOARD Equipment Pursuant to the authority vested in the Air Resources Board by the Health and Safety Code

The typical accountant is a man, past middle age, spare, wrinkled, intelligent, cold, passive, non-committal, with eyes like a cod-fish; polite in contact but at the same time unresponsive, calm and damnably composed as a concrete post or a plaster of Paris cast; a petrification with a heart of .

Introduction. The Overture Group’s Executive and Professional Search Services are designed to assist clients in finding the right people to fill key roles in their organization. Our goal is to insure long-term success in the people we help our clients recruit..