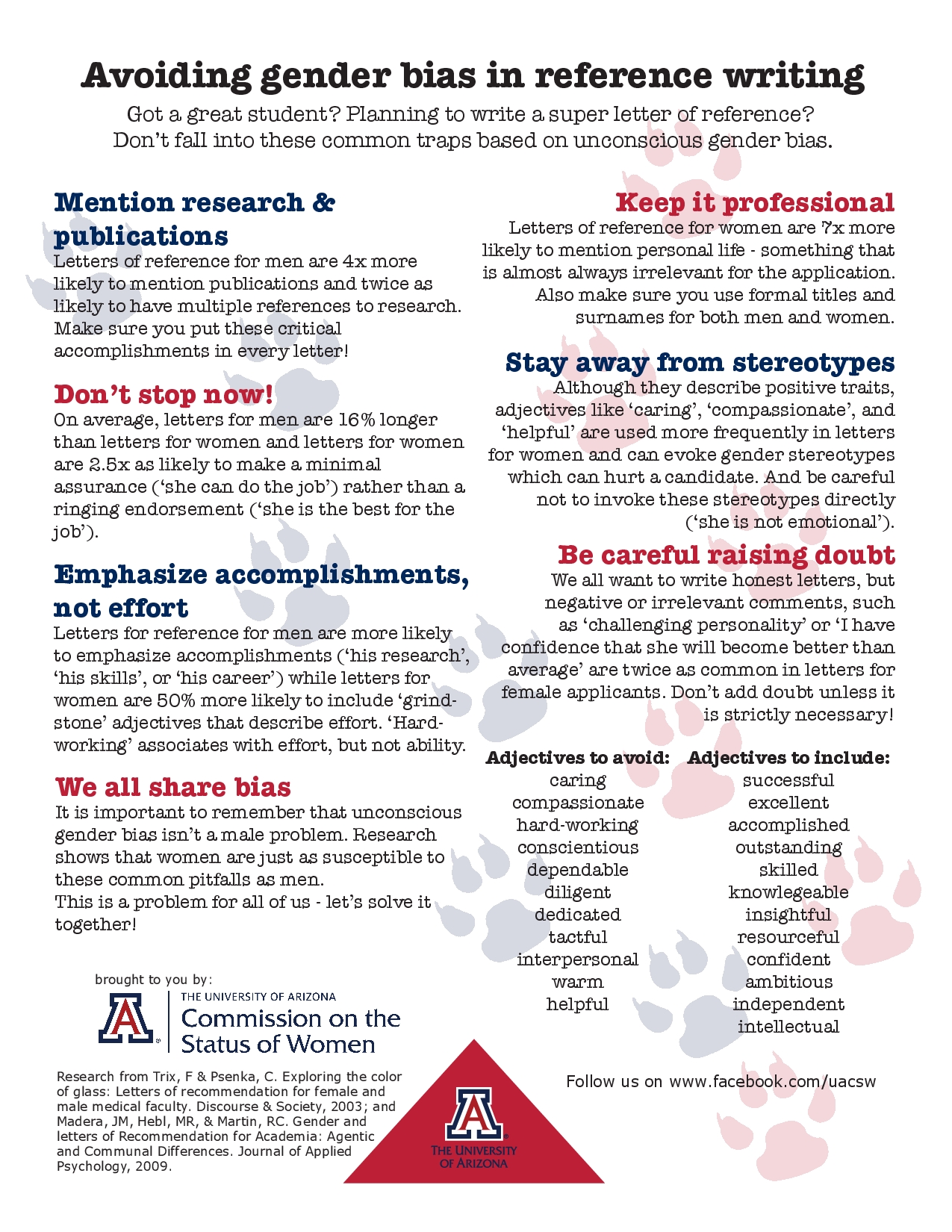 1 Avoiding gender bias in reference writin
Avoiding gender bias in reference writingGot a great student? Planning to write a super letter of reference? Don’t fall into these common traps based on unconscious gender bias.Keep it professionalLetters of reference for women are 7x more likely to mention personal life - something that is almost always irrelevant for the application. Also make sure you use formal titles and surnames for both men and women.We all want to write honest letters, but negative or irrelevant comments, such as ‘challenging personality’ or ‘I have confidence that she will become better than average’ are twice as common in letters for female applicants. Don’t add doubt unless it is strictly necessary!Stay away from stereotypesAlthough they describe positive traits, adjectives like ‘caring’, ‘compassionate’, and ‘helpful’ are used more frequently in letters for women and can evoke gender stereotypes which can hurt a candidate. And be careful not to invoke these stereotypes directly Emphasize accomplishments, not effortLetters for reference for men are more likely to emphasize accomplishments (‘his research’, ‘his skills’, or ‘his career’) while letters for women are 50% more likely to include ‘grind-stone’ adjectives that describe effort. ‘Hard-working’ associates with effort, but not ability.Research from Trix, F & Psenka, C. Exploring the color of glass: Letters of recommendation for female and male medical faculty. Discourse & Society, 2003; and Madera, JM, Hebl, MR, & Martin, RC. Gender and letters of Recommendation for Academia: Agentic and Communal Differences. Journal of Applied Psychology, 2009.On average, letters for men are 16% longer than letters for women and letters for women are 2.5x as likely to make a minimal assurance (‘she can do the job’) rather than a ringing endorsement (‘she is the best for the We all share biasIt is important to remember that unconscious gender bias isn’t a male problem. Research shows that women are just as susceptible to these common pitfalls as men. This is a problem for all of us - let’s solve it together!Letters of reference for men are 4x more likely to mention publications and twice as likely to have multiple references to research. Make sure you put these critical accomplishments in every letter!Adjectives to avoid:compassionatediligentwarmexcellentaccomplishedknowlegeableconfident Follow us www.facebook.com/uacsw brought to you by:

Sherri Irvin. Presidential Research Professor . of Philosophy and WGS. S. creening: systematic with clear criteria. Template for each applicant with clearly defined criteria as specified in the job ad.

For APA Style. Created by Alice Frye, Ph.D., Department of Psychology, University of Massachusetts, Lowell. 1. Steps in this tutorial. 1) State the goals of this tutorial. 2) What biased language is.

MOVING BEYOND BIAS Name of Presenter(s)

Using education and training to open hearts and minds

Using education and training to open hearts and minds

1. . Bell-ringer. A fight between two girls broke out in the hallway last period. The principal asked those who witnessed the fight to report what happened. . The witnesses included:. the best friend of one of the students who fought,.