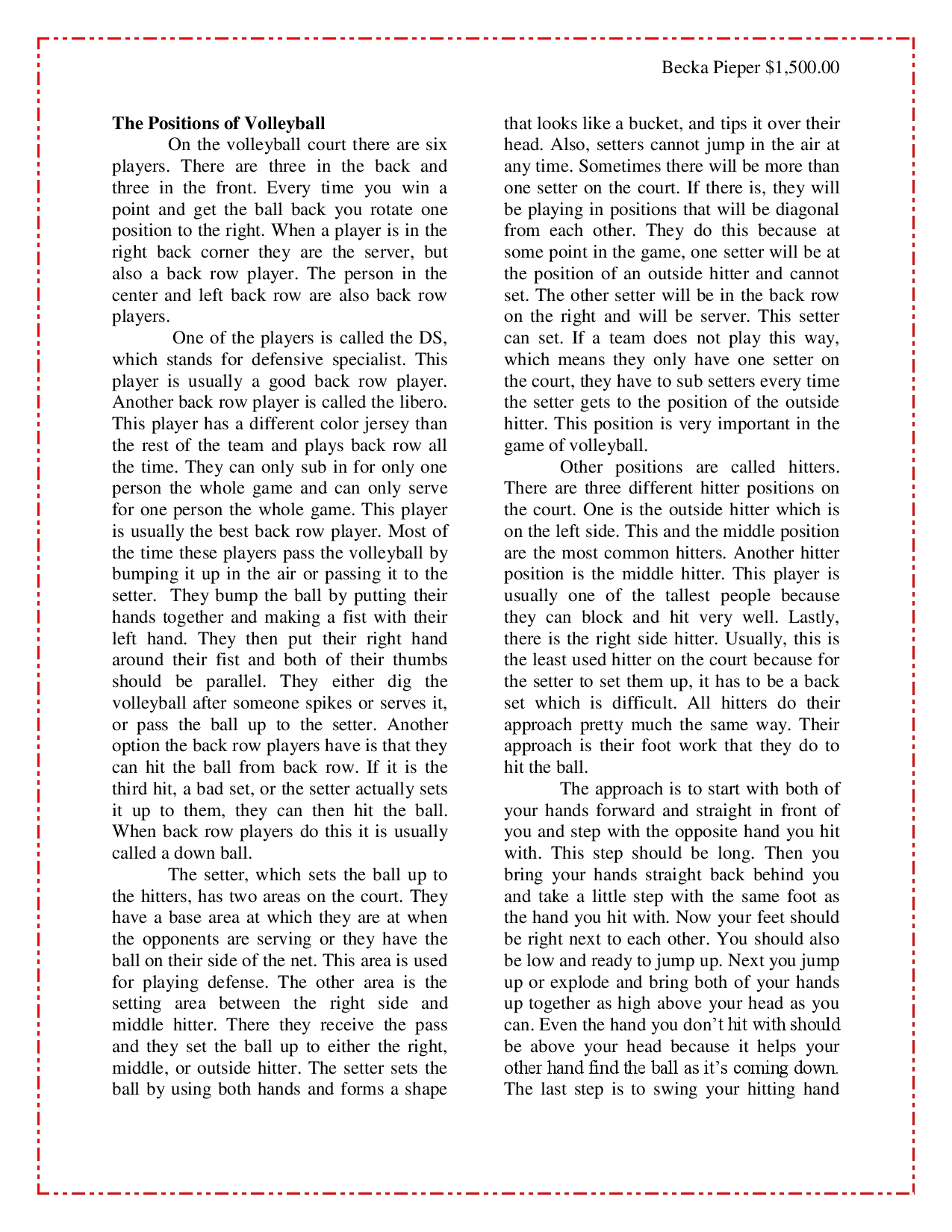 1 Becka Pieper $1,500.00 The Positions o
Becka Pieper $1,500.00 The Positions of Volleyball On the volleyball court there are six players. There are three in the back and three in the front. Every time you win a point a nd get the ball back you rotate one position to the right. When a player is in the right back corner they are the server, but also a back row player. The person in the center and left back row are also back row players. One of the players is called the DS, which stands for defensive sp ecialist. This player is usually a good back row player. Another back row player is called the libero. This player has a different color jersey than the rest of the team and plays back row all the time. They can only sub in for only one person the whole ga me and can only serve for one person the whole game. This player is usually the best back row player. Most of the time these players pass the volleyball by bumping it up in the air or passing it to the setter. They bump the ball by putting their hands tog ether and making a fist with their left hand. They then put their right hand around the ir fist and both of their thumbs should be parallel. They either dig the volleyball after someone spikes or serves it, or pass the ball up to the setter. Another option the back row players have is that they can hit the ball from back row. If it is the third hit, a bad set, or the setter actually sets it up to them, they can then hit the ball. When back row players do this it is usually called a down ball. The setter, wh ich sets the ball up to the hitters, has two areas on the court. They have a base area at which they are at when the opponents are serving or they have th e ba ll on their side of the net. This area is used for playing defense. The other area is the setting area between the right sid e and middle hitter. There they receive the pass and they set the ball up to either the right, middle , or outside hitter. The setter sets the ball by using both hands and forms a shape that looks like a bucket , and tips it over th eir head . Also, setters cannot jump in the air at any time. Sometimes there will be more than one setter on the court. If there is , they will be playing in positions that will be diagonal from each other. They do this because at some point in the game, one setter will be at the position of an outside hitter and cannot set. The other setter will be in the back row on the right and will be serve

2 r. This setter can set. If a team does
r. This setter can set. If a team does not play this way, which means they only have one setter on the court, they h ave to sub setters every time the setter gets to the position of the outside hitter. This position is very important in the game of volleyball. Other positions are called hitters. There are three different hitter positions on the court. One is the outside hitter which is on the left side. This and the middle position are the most common hitters. Another hitter position is the middle hitter. This player is usually one of the tallest people because they can block and hit very well. Lastly, there is the right side hitter. Usually, this is the least used hitter on the court because for the setter to set them up, it has to be a back set which is difficult. All hitters do their approach pretty much the same way. Their approach is their foot work that they do to h it the ball. T he approach is to start with both of your hands forward and straight in front of you and step with the opposite hand you hit with. This step should be long. Then you bring your hands straight back behind you and take a little step with the s ame foot as the hand you hit with. Now your feet should be right next to each other. You should also be low and ready to jump up. Next you jump up or explode and bring both of your hands up together as high above your head as you can. Even the hand you don ’t hit with should be above your head because it helps your other hand find the ball as it’s coming down. The last step is to swing your hitting hand Becka Pieper $1,500.00 down with your hand open and fingers spread out. Also, as you hit and bring your hand down your other han d should come down too. Once you are done you should end up with your knees bent and your hands straight out behind you. This approach is very important when you are about to hit the volleyball. Another job the front row players have is to block the othe r team’s hits. To block you put both of y our hands up as high as you can and jump. Depending on where the ball is the front row players move. For example, if someone was going to hit the ball from the right side the middle player would move to that side. U sually the middle player is the only person that moves to block. Volleyball is an amazing sport with lots of different positions and techniques for each position. It is one of the best sports. By : Rachel Swichtenberg

dateness of reviews is often neglected in overviews: a systematic revi

Up - to - Dawid Pieper, Sunya - Lee Antoine, Edmund A.M. Neugebauer, Michaela Eikermann Background and Objective As systematic reviews may run out of date, it might be necessary to update them . Out -

Ch.3: Philosophic Belief Systems, part II: Pragmatism and Existentialism. Fall 2019. Marco Valtorta. mgv@cse.sc.edu. Pragmatist Metaphysics. Reality is not the (hidden) ideal; it is not physical matter; it is a process.