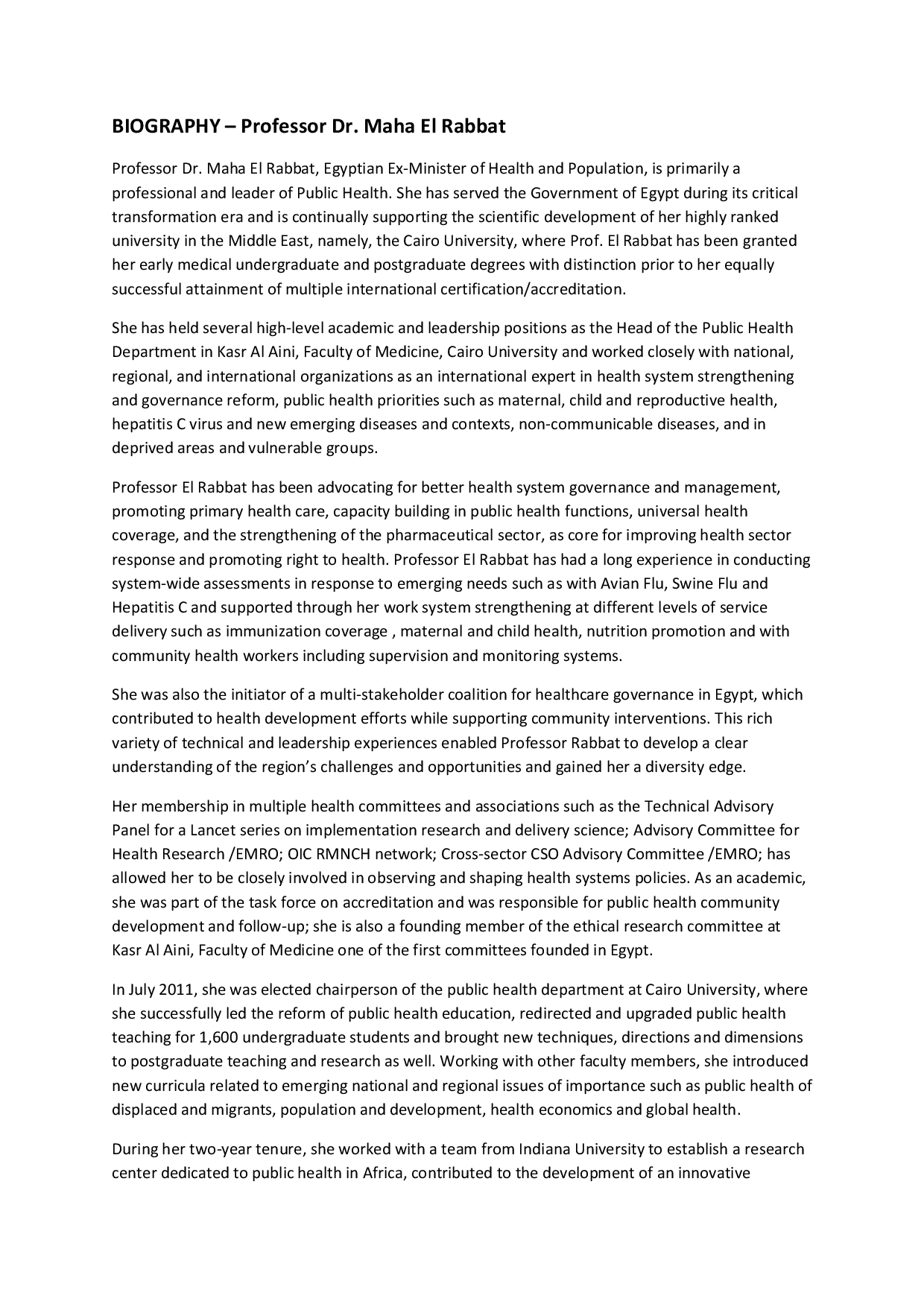 1 BIOGRAPHY – Professor Dr. Maha El
BIOGRAPHY – Professor Dr. Maha El Rabbat Professor Dr. Maha El Rabbat, Egyptian Ex - Minister of Health and Population, is primarily a professional and leader of Public Health. She has served the Government of Egypt during its critical transformation era and is continually supporting the scientific de velopment of her highly ranked u niversity in the Middle East, namely, the Cairo University, where Prof. El Rabbat has been granted her early medical undergraduate and postgraduate degrees with distinction prio r to her equally successful attain ment of multiple international certification/accreditation. She has held several high - level academic and leadership positions as the Head of the Public Health Department in Kasr Al Aini, Faculty of Medicine, Cairo Unive rsity and worked closely with national, regional, and international organizations as an international expert in health system strengthening and governance reform, public health priorities such as maternal, child and reproductive health, hepatitis C virus a nd new emerging diseases and contexts, non - communicable diseases, and in deprived areas and vulnerable groups. Professor El Rabbat has been advocating for better health system governance and management, promoting primary health care, capacity building in p ublic health functions, universal health coverage, and the strengthening of the pharmaceutical sector, as core for improving health sector response and promoting right to health. Professor El Rabbat has had a long experience in conducting system - wide asses sments in response to emerging needs such as with Avian Flu, Swine Flu and Hepatitis C and supported through her work system strengthening at different levels of service delivery such as immunization cover age , maternal and child health , nutrition promotio n and with community health workers including supervision and monitoring systems. She was also the initiator of a multi - stakeholder coalition for healthcare governance in Egypt, which contributed to health development efforts while supporting community interventions. This rich variety of technical and leadership experiences enabled Professor Rabbat to develop a clear understanding of the region’s challenges and opportunities and gained her a diversity edge. Her membership in multiple health committees an d associations such as the Technical Advisory Panel for a Lancet series on implementation research and delivery science; Advisory Comm

2 ittee for Health Research /EMRO; OIC RM
ittee for Health Research /EMRO; OIC RMNCH network; Cross - sector CSO Advisory Committee /EMRO; has allowed her to be close ly involved in observing and shaping health systems policies. As an academic, she was part of the task force on accreditation and was responsible for public health community development and follow - up; she is also a founding member of the ethical research c ommittee at Kasr Al Aini, Faculty of Medicine one of the first committees founded in Egypt. In July 2011, she was elected chairperson of the public health department at Cairo University, where she successfully led the reform of public health education, red irected and upgraded p ublic health teaching for 1,600 undergraduate students and brought new techniques, directions and dimensions to postgraduate teaching and research as well. Working with other faculty members, she introduced new curricula related to em erging national and regional issues of importance such as public health of displaced and migrants, population and development, health economics and global health. During her two - year tenure, she worked with a team from Indiana University to establish a res earch center dedicated to public health in Africa, contributed to the development of an innovative multidisciplinary degree in professional health economics at Cairo university, sought and succeeded in making public health issues a national priority throug h conduction of national - wide stakeholders workshops, while reforming public health learning and teaching and supporting the university’s regional and African efforts. Between July 2013 and March 2014, she was appointed to serve as the Minister of Health a nd Population, the first lady minister of health in Egypt. She currently serves as the Executive Director of the Middle East and North Africa Health Policy Forum (MENA HPF), an NGO with a regional mandate. Through her position, she seeks to strengthen hea lth systems and human development particularly in lower and middle income countries and those in fragile contexts in the region through evidence - based policy proposals, knowledge exchange, networking, research, and capacity building. Dr. Rabbat is working with UNHCR and League of Arab States to develop a regional strategy for Public Health in asylum context for the Arab region. The strategy outlines the key strategic priorities to be undertaken by LAS Member States to ensure access to Public health in asyl um context and fragile situations.

This sample biography unit, appropriate for various ages, can be used with your glossary handout to better understand what each part of the . UbD. framework entails.. Illustrative Example:. Unit on Biography.