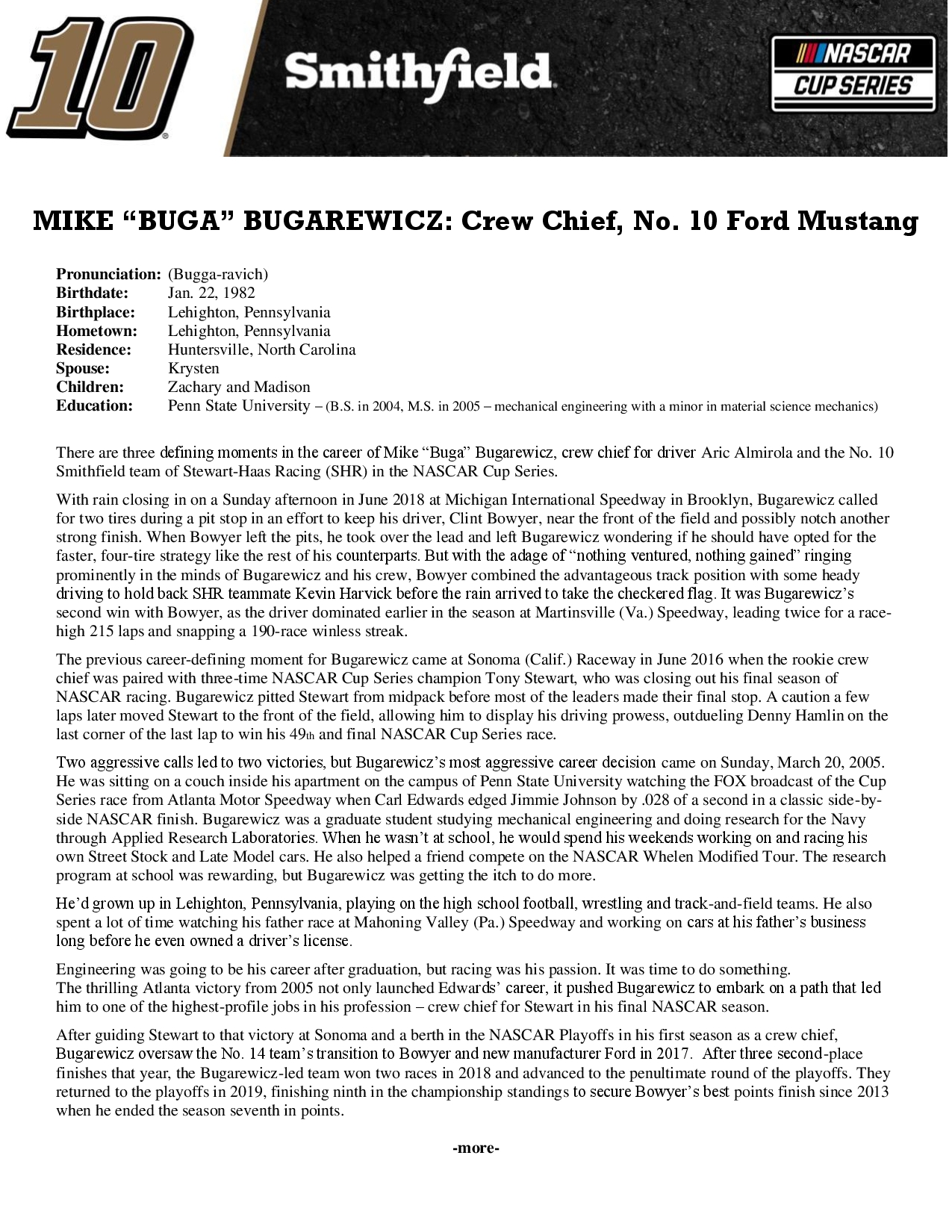 768805 Conspiracy to commit crimes of sabotage If two or mo

The Council has modified the monitoring requirements for Northeast mul

1 MIKE ”BUGA” BUGAREWICZ : Crew C
MIKE ”BUGA” BUGAREWICZ : Crew Chief, No. 10 Ford Mustang Pronunciation: (Bugga - r a v ich ) Birthdate: Jan . 22, 1982 Birthplace: Lehighton, Pennsylvania Hometown: Lehighton, Pennsylvania Residence: Huntersville , N orth Carolina Spouse : Kryst e n Children: Zachary and Madison Education: Penn State University – (B.S. in 2004, M.S. in 2005 – mechanical e ngineering with a min or in material science mechanics ) There are three defining moments in the career of Mike “Buga” Bugarewicz, crew chief for driver Aric Almirola and the No. 10 Smithfield team of Stewart - Haas Racing (SHR) in the NASCAR Cup Series. With rain closing in on a Sunday afternoon in June 2018 at Michigan International Speedway in Brooklyn, Bugarewicz called for two tires during a pit stop in an effort to keep his driver, Clint Bowyer , near the front of the field and possibly notch another strong finish. When Bowyer left the pits, he took over the lead and left Bugarewicz wondering if he should have opted for the faster, four - ti re strategy like the rest of his counterparts. But with the adage of “nothing ventured, nothing gained” ringing pro minently in the minds of Bugarewicz and his crew , Bowyer combined the advantageous track position with some heady driving to hold back SHR teammate Kevin Harvick before the rain arrived to take the checkered flag. It was Bugarewicz’s second win with Bowyer , as the driver dominated earlier in the season at Martinsville (Va.) Speedway, leading twice for a race - high 215 laps and snap ping a 190 - race winless streak. The previous career - defining moment for Bugarewicz came at Sonoma (Calif.) Raceway in June 2016 when the rookie crew chief was paired with three - time NASCAR Cup Series champion Tony Stewart, who was closing out his final season of NASCAR racing. Bugarewicz pitted Stewart from midpack before most of the lead ers made their final stop. A caution a few l aps later moved Stewart to the front of the field, allowing him to display his driving prowess , outdueling Denny Hamlin on the last corner of the last lap to win his 49 th and final NASCAR Cup Series race. Two aggressive calls led to two victories, but Bugarewicz’s most aggressive career decision came on Sunday, March 20, 2005. He was sitting on a couch inside his apartment on the campus of Penn State University watching the FOX broadcast of the Cup Series r ace from Atlanta Motor Speedway when Carl Edwards edged Jimmie Johnson by .028 of a second in a classic side - by - side NASCAR finish. Bugarewicz was a graduate student studying mechanical engineering and doing research for the Navy through Applied Research L aboratories. When he wasn’t at school, he would spend his weekends working on and racing his own Street Stock and Late Model cars. He also helped a friend compete on the NASCAR Whelen Modified Tour. The research program at school was rewarding, but Bugarew icz was get ting the itch to do more . He’d grown up in Lehighton, Pennsylvania, playing on the high school football, wrestling and track - and - field teams. He also spent a lot of time watching his father race at Mahoning Valley (Pa.) Speedway and working on cars at his father’s business long before he even owned a driver’s license. Engineering was going to be his career after graduation, but racing was his passion. It was time to do something. The thrilling Atlanta victory from 2005 not only launched Edwa rds’ career, it pushed Bugarewicz to embark on a path that led him to one of the highest - profile jobs in his profession – crew chief for Stewart in his final NASCAR season. After guiding Stewart to that victory at Sonoma and a berth in the NASCAR Playoff s in his first season as a crew chief, Bugarewicz oversaw the No. 14 team’s transition to Bowyer and new manufacturer Ford in 2017. After three second - place finishes that year, the Bugarewicz - led team won two races in 2018 and advanced to the penultimate round of the playoffs. They returned to the playoffs in 2019 , finishing ninth in the championship standing s to secure Bowyer’s best points finish since 2013 when he ended the season seventh in points. - more - Mike Bugarewicz Page Tw o And t o think i t all started with

2 a race broadcast from 2005 . Afte r wa
a race broadcast from 2005 . Afte r watching that battle from Atlanta in March , Bugarewicz drove to Charlotte , North Carolina, in October on a whim, knocked on doors at several race shops and passed out resumes in hopes of getting a foothold in the sport. A few weeks after returning home, job offers arrived over the phone. He loaded all his possessions and drove back to Charlotte to begin h is NASCAR life. Bugarewicz started at Roush - Fenway Racing in December 2005, playing an engineering role across all of its NASCAR programs during the 2006 season. He worked with Danny O’Quinn in the NASCAR Xfinity Series while also working with the NASCAR Cup Series teams and a part - time NASCAR Truck Series effort. From 2007 through 2009, Bugarewicz was paired with David Ragan in the Cup Series. In 2010, he stayed within the Roush family and worked on the No. 98 Cup Series team with Paul Menard as part of t he team’s alliance with Richard Petty Motorsports. Roush moved Bugarewicz to the No. 17 Cup Series team in 2011, where his race - engineering skills aided Matt Kenseth. Kenseth visited victory lane six times over the next two seasons, posting top - 10 finish es in the season - ending standings. Rookie driver Ricky Stenhouse Jr. , took over for Kenseth in the No. 17 in 2013 and, at roughly the same time, Bugarewicz started seriously thinking of expanding his horizons. With limited opportunities at Roush, Bugarewicz took crew chief Rodney Childers’ offer to join him and driver Kevin Harvick as the lead race engineer for the No. 4 team at SHR. Under Childers’ guidance and with Harvick’s abilities, the team dominated the 2014 season, winning five races and capturing the Cup Series championship. The team nearly repeated the feat in 2 015, winning three races and finishing second in the title chase. The work ethic and determination honed in his Pennsylvania upbringing prepared him for all of the above when Bugarewicz took over crew chief duties on the No. 14 in 2016. It wasn’t an eas y rookie season when, just days before it started, Stewart sustained a back injury in an all - terrain vehicle accident. The injury kept Stewart out of what would have been his final Daytona 500 and the ensuing seven races. In his place during this period we re several fill - in drivers. Bugarewicz deftly managed the situation and, upon getting Stewart back behind the wheel of the No. 14, helped the first - ballot NASCAR Hall of Famer earn five top - five finishes and eight top - 10s, one of which was the win at Son oma. The victory propelled Stewart to his playoff finish of 15 th , just 11 points shy of advancing to the Round of 12. Bugarewicz, who was the only rookie crew chief in the 2016 playoffs, turned his at tention in 2017 to Bowyer, who joined SHR in search of a rebirth after suffering through the previous two seasons in sub - par equipment. Bowyer took advantage of his new opportunity with Bugarewicz, running up front to score three second - place finishes on his way to a year - end tally of six top - fives and 13 top - 10s. His average finish of 15.5 was 11 th - best among full - time drivers competing in 2017, and it left him just short of a spot in the NASCAR Playoffs. Bowyer was determined to better those numbers in 2018, and with Bugarewicz on top of the pit box, he did just that. The breakthrough win March 26 at Martinsville led to the second victory June 10 at Michigan. They were a part of nine top - fives and 16 top - 10s – numbers that carried Bowyer into the penultimate round of the NASCAR Playoffs. Matching those numbers in 2019 proved difficult, but Bugarewicz and Bowyer continued to perform. The duo made the playoffs for a second straight year and Bowyer scored his third career NASCAR Cup Series pole – and first with SHR – Sept. 14 at Las Vegas Motor Speed way. The pole symbolized the team’s s trength in qualifying, where Bowyer’s 10.7 average starting spot was his best in 14 full seasons. A new challenge was presented to Bugarewicz in 2020, where he joined Almirola, another quick qualifier and race winner who stands to benefit from Bugarewicz ’s guidance. Bugarewicz resides in Huntersville , North Carolina, with his wife Krysten and their son Zachary and daughter Madison . - SHR -