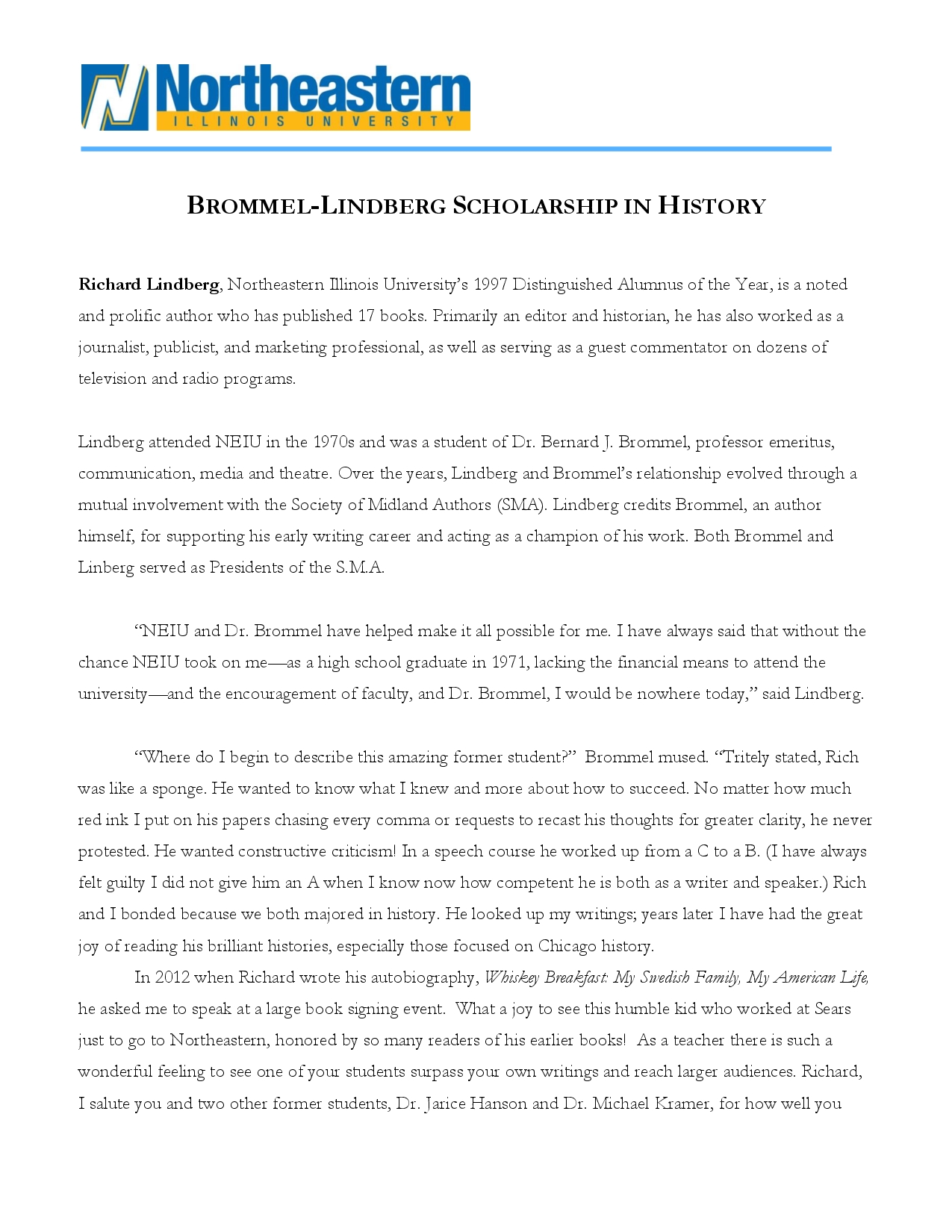 1 B ROMMEL - L INDBERG S CHOLARSHIP IN
B ROMMEL - L INDBERG S CHOLARSHIP IN H ISTORY Richard Lindberg , Northeastern Illinois University’s 1997 Distinguished Alumnus of the Year, is a noted and prolific author who has published 17 books. Primarily an editor and historian, he has also worked as a journalist, publicist, and marketing pro fessional, as well as serving a s a guest commentator on dozens of television and radio program s . Lindberg attended NEIU in the 1970s and was a student of Dr. Bernard J. Brommel, professor emeritus, communication, media and theatre. Over the years, Lindberg and Brommel’s relationship evolved through a mutual in volvement with the Society of Midland Authors (SMA) . Lindberg credits Brommel, an author himself, for supporting his early writing career and acting as a champion of his work. Both Brommel and Linberg served as Presidents of the S.M.A. “NEIU and Dr. Brommel hav e helped make it all possible for me. I have always said that without the chance NEIU took on me — as a high school graduate in 1971, lacking the financial means to attend the university — and the encouragement of faculty, and Dr. Brommel, I would be nowhere today, ” said Lin dberg. “Where do I begin to describe this amazing former student?” Brommel mused. “Tritely stated, Rich was like a sponge. He wanted to know what I knew and more about how to succeed. No matter how much red ink I put on his papers chasing every comma or requests to recast his thoughts for greater clarity, he never protested. He wanted constructive criticism! In a speech course he worked up from a C to a B. (I have always felt guilty I did not give him an A when I know now how competent he is both as a wr iter and speaker.) Rich and I bonded bec

2 ause we both majored in history. He look
ause we both majored in history. He looked up my writings; years later I have had the great joy of reading his brilliant histories, especially those focused on Chicago history. In 2012 when Richard wrote his auto biography, Whiskey Breakfast: My Swedish Family, My American Life, he asked me to speak at a large book signing event. What a joy to see this humble kid who worked at Sears just to go to Northeastern , honored by so many readers of his earlier books! As a teacher there is such a wonderful feeling to see one of your students surpass your own writings and reach larger audiences. Richard , I salute you and two other former students, Dr. Jarice Hanson and Dr. Michael Kramer, for how well you have represented NEIU . I think you three are the most published graduates of NEIU. That is why I created scholarships in honor of each of you!” The Brommel - Lindberg Scholarship in History was created to honor Lindberg by providing an annual scholarship to a junior or senior majoring in history who demonstrates academic promise and financial need. Lindberg has said that having a scholarship named for him has been “one of the highest attainments I have received in my professional career.” Lindberg noted he is privileged to know Dr. Brommel, who he calls “Bernie,” and to be recognized by him in a way that also serves future generations of students. Recently, NEIU commissioned Lindberg to write a manuscript of the history of NEIU in book form. To complete this work, Lindberg has been collecting history and materials as well as first - hand written and oral accounts from alumni, faculty and staff. NEIU looks forward to the publication of this work, which will be the first published history of the University

Download - The PPT/PDF document "CHOLARSHIP IN" is the property of its rightful owner. Permission is granted to download and print the materials on this web site for personal, non-commercial use only, and to display it on your personal computer provided you do not modify the materials and that you retain all copyright notices contained in the materials. By downloading content from our website, you accept the terms of this agreement.

Fostering mutual understanding between the people of Algeria and the U