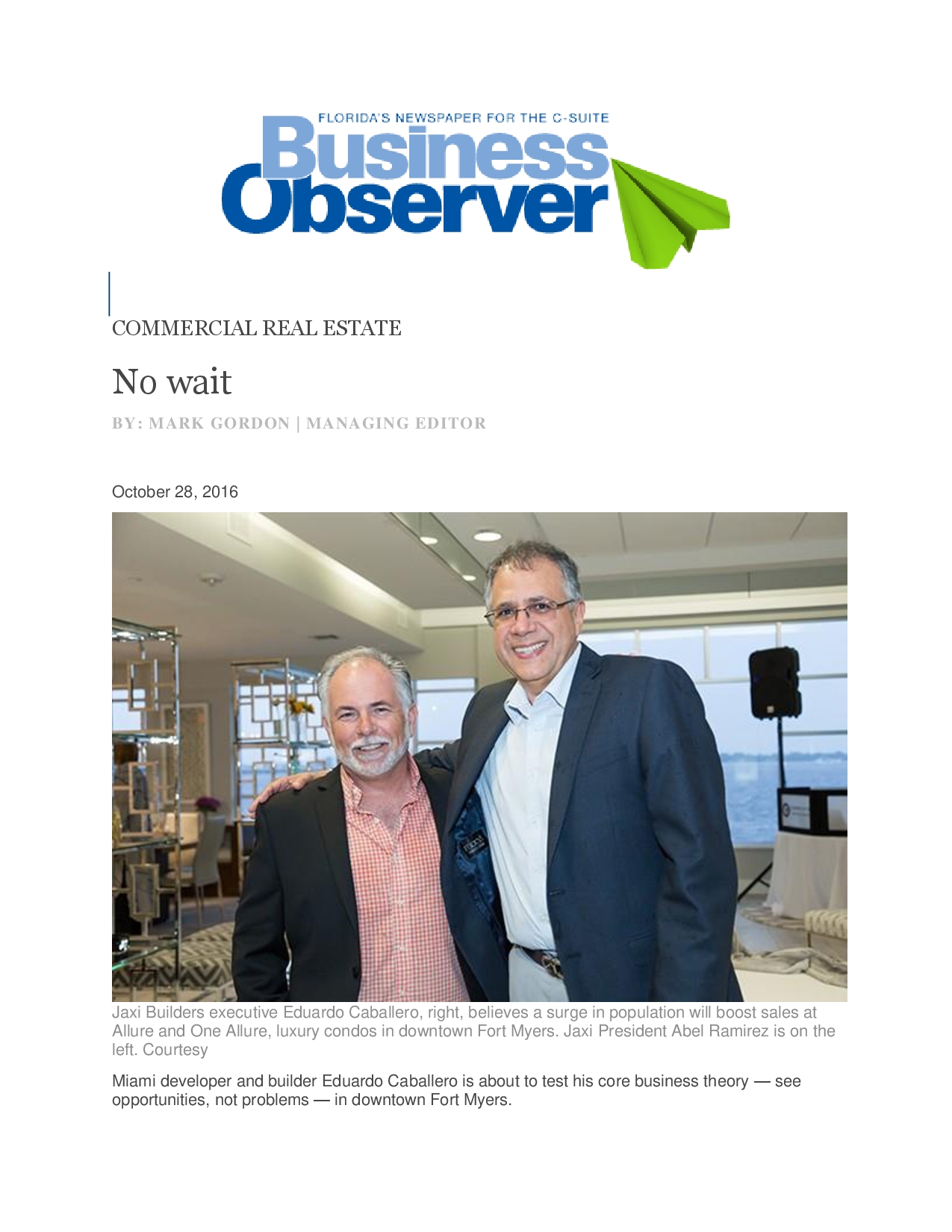 Department of the Treasury Internal Revenue ServiceCredit for Qualifie

1 COMMERCIAL REAL ESTA TE No wait BY:
COMMERCIAL REAL ESTA TE No wait BY: MARK GORDON | MA NAGING EDITOR October 28, 2016 Jaxi Builders executive Eduardo Caballero, right, believes a surge in population will boost sales at Allure and One Allure, luxury condos in downtown Fort Myers. Jaxi President Abel Ramirez is on the left. Courtesy Miami developer and builder Eduardo Caballero is about to test his core business theory — see opportunities, not problems — in downtown Fort Myers. Caballero’s firm, Jaxi Builders, is already behind one of the most ambitious luxury condo projects in years in downtown Fort Myers, Allure. Initially announced in 2015, plans include 292 units in a pair of 32 - story condo towers at 2601 First St., on the banks of the Caloosahatchee River. Amenities include an in finity - edge pool that overlooks the river and boat slips and The Allure Your Senses Rooftop garden. Construction of the $140 million project is expected to get underway after 70 sales, which could be early next year. Prices range from $300,000 a unit to $1 million. It was in the Allure sales process that Caballero and his business partner, Jaxi President Abel Ramirez, decided to pivot and see opportunity in a potential problem. While sales interest in Allure was high, says Caballero, several buyers balked . They wanted to move in sooner than what was realistically possible with such a large project. The unusual solution: Jaxi announced another condo project, with more luxury features, and higher prices, right next door. Named One Allure, it’s like the spl ashy little sister. It’s smaller, half the size of Allure at 15 stories. But the roughly $70 million project, at 2583 First St., could be completed by late 2018 — not 2020, which is the target completion date for the original Allure. “We are always open t o seeing and hearing what’s going on in the market,” says Caballero, a vice president at Jaxi who has also designed buildings and developed projects in South America. “We are open to what

2 the customer wants.” Jaxi executive
the customer wants.” Jaxi executives say customers want luxury in an open - space designed environment that’s near the downtown action. Specific features for One Allure include private entrance elevators, porcelain flooring, natural gas ranges, five - burner cooktops, quartz countertops in chef - inspired kitchens, floor - to - ceil ing windows, expansive balconies and large walk - in wardrobes. Condos in the tower, a total of 24 two - and three - bedroom units, range in size from 1,624 to 3,900 square feet. Prices range from the high $500,000s to $2.7 million. There are two penthouses, a nd one is already reserved. The lead architecture firm behind the design is Coral Gables - based Behar Font & Partners. Allure and One Allure join a growing list of downtown Fort Myers condo and large - scale developments. The list includes a 225 - room conven tion center hotel, a $60 million assisted - living project and The Vue, an 18 - story tower with 133 planned units near Centennial Park on West First Street. Jaxi, which Ramirez founded in 1986, entered the Fort Myers market in 2011 when it bought the incompl ete Bella Casa condo project off Daniels Parkway for $2.4 million. The company spent at least $9 million to complete the 200 - unit complex, which had stalled with 26 completed condos, 120 partially completed units and no sales momentum. In addition to Allur e and several residential projects in the Miami - Dade area, Jaxi is also developing Majestic Palms, an 80 - unit condo project near Fort Myers area beaches. Even with the growing competition in downtown Fort Myers, Caballero is so confident in the staying po wer of the rebound that the risk, he says, would be to not do One Allure. And in comparison to Miami, he says, doing business in Fort Myers and Lee County is a cinch. “We believe this is a great place with great people,” Caballero says. “You really have people here willing to work with you to make things happen. The mindset in Miami leans more toward complications.”

GARA COMMERCIAL focuses on relationships place. Understanding the needs of our clients and then focusing In addition to his real estate activities, Gara Strategy and currently is a member of the Pl

THE ECONOMIC IMPACT of the COMMERCIAL REAL ESTATE SECTOR on

Sponsored by. Dr. Douw . Boshoff. University. . of Pretoria, Department of Construction . Economics. THE ECONOMIC IMPACT of the COMMERCIAL REAL ESTATE SECTOR on the SOUTH AFRICAN ECONOMY. Sponsored by.

How to Find a Commercial Real Estate in Dubai