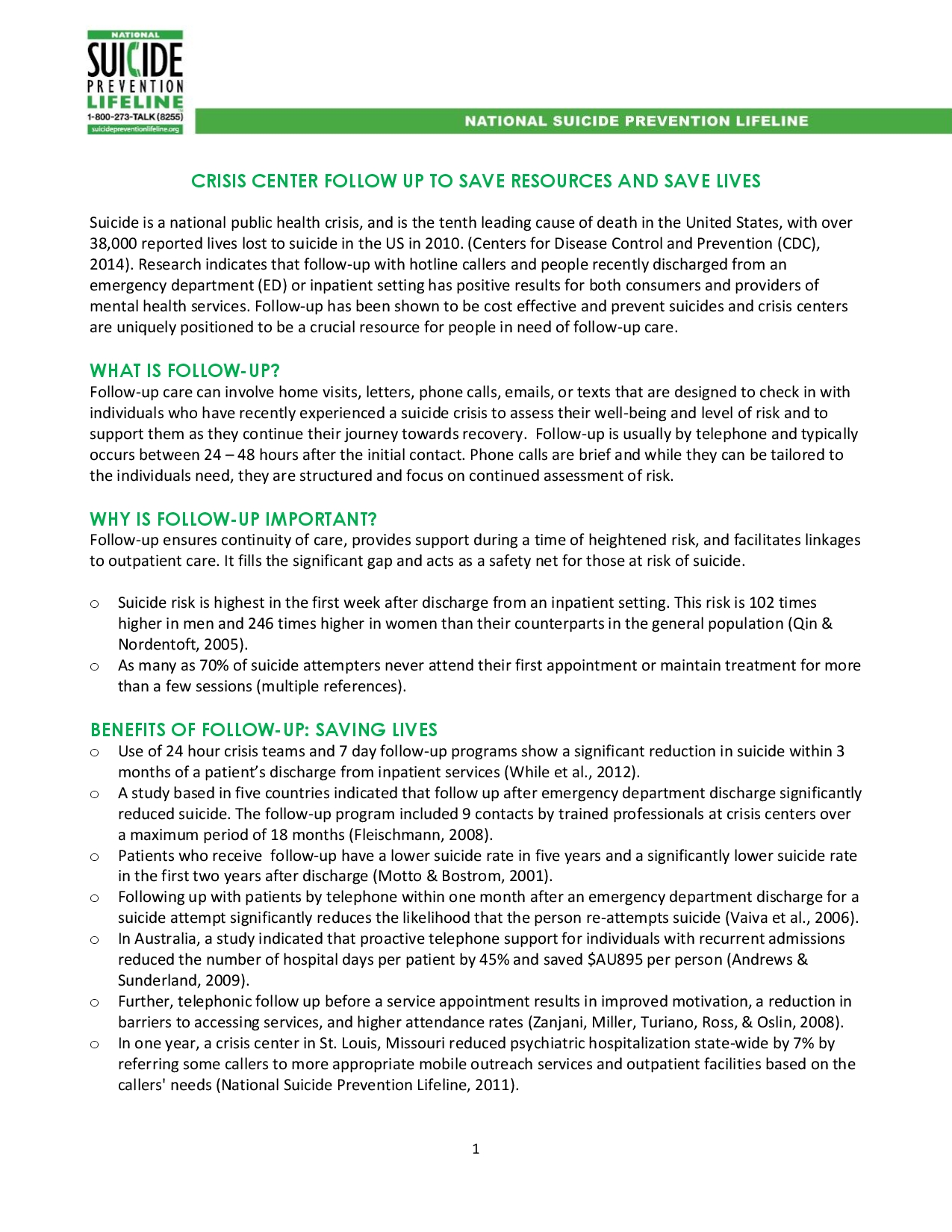 CRISIS CENTER FOLLOW UP TO SAVE RESOURCES AND SAVE LIVES

Document on Subject : "CRISIS CENTER FOLLOW UP TO SAVE RESOURCES AND SAVE LIVES"— Transcript:

1 1 CRISIS CENTER FOLLOW UP TO SAVE RESO
1 CRISIS CENTER FOLLOW UP TO SAVE RESOURCES AND SAVE LIVES Suicide is a national public health crisis, a nd is the tenth leading caus e of death in the United States, with over 38,000 reported lives lost to suicide in the US in 2010. ( Centers for Disease Control and Prevention (CDC), 2014) . R esearch indicates that follow - up with hotline callers and people recently discharged from an emergency department (ED) or inpatient setting has positive results for both consumers and providers of mental health services. Follow - up has been shown to be cost effective and prevent suicides and c risis centers are uniquely positioned to be a crucial resource for people in need of follow - up care . WHAT IS FOLLOW - UP? Follow - up care can involve home visits, letters, phone calls, emails, or texts that are designed to check in with individuals who have recently experienced a suicide crisis to assess their well - being and level of risk and to support them as they continue their journey towards recovery. Follow - up is usually by telephone and typically occurs between 24 – 48 hours after the initial contact. Phone calls are brief and while they can be tailored to the individuals need, they are structured and focus on continued assessment of risk. WHY IS FOLLOW - UP IMPORTANT? Follow - up ensures continuity of care, provides support during a time of heightened risk, and facilitates linkages to outpatient care. It fills the significant gap and acts as a safety net for those at risk of suicide. o Suicide risk is highest in the first week after discharge from an inpatient setting . This risk is 102 times higher in men and 246 times higher in women than their counterparts in the general population ( Qin & Nordentoft, 2005 ) . o As many as 70% of suicide attempters never attend their first appointment or maintain treatment for more than a few sessions (multiple references) . BENEFITS OF FOLLOW - UP: SAVING LIVES o Use of 24 hour crisis teams and 7 day follow - up programs show a significant reduction in suicide within 3 months of a patient’s discharge from inpatient services ( While et al., 2012 ) . o A study based in five countries indicated that follow up after emergency department discharge significantly reduced suicide. The follow - up program included 9 contacts by trained professionals at crisis centers ove r a maximum period of 18 months (Fleischmann, 2008). o Patients who receive follow - up have a lower suicide rate in five years and a significantly lower suicide rate in the first two years after discharge ( Motto & Bostrom, 2001 ) . o Following up with patients by telephone within one month after an emergency department discharge for a suicide attempt significantly reduces the likelihood that the person re - attempts suicide ( Vaiva et al., 2006 ) . o In Australia, a study indicated that proactive telephone support for individuals with recurrent admissions reduced the number of hospital days per patient by 45% and saved $AU895 per person ( Andrews & Sunderland, 2009 ) . o Further, telephonic follow up before a service appointment results in improve d motivation, a reduction in barriers to accessing services, and higher attendance rates ( Zanjani, Miller, Turiano, Ross, & Oslin, 2008 ) . o In one year, a crisis center in St. Louis, Missouri reduced psychiatric hospitalization state - wide by 7% by referring some callers to more appropriate mobile outreach services and outpatient facilities based on the callers' needs

2 ( National Suicide Prevention Lifeline,
( National Suicide Prevention Lifeline, 2011 ) . 2 BENEFITS OF FOLLOW - UP: SAVING RESOURCES o 45% of incurred costs for suicide attempt admissions are a result of readmissions to the ED ( Beautrais & Gibbs, 2004 ) . o In a study of the return on investment (ROI) of post - discharge follow - up calls for suicidal ideation or deliberate self - harm , Truven Health A nalytics estimated what the cost savings could be if an investment was made in crisis centers to place the follow - up calls . Truven estimated the amount of savings by reviewing data from crisis center s' cost of implementing follow - up calls and their potential to reduce hospital readmissions and additional emergency department visits within 30 days of discharge. The conclusion of this ROI analysis was that insurance providers could save money by investing in c risis centers to provide follow - up calls as both a measure t o prevent suicidal behavior as well as the subsequent need for additional inpatient or emergency department intervention (Richardson, Mark, McKeon, 2013). THE USE OF CRISIS HOTLINES IN FOLLOW - UP Crisis hotlines are uniquely positioned to provide follow up care – c risis hotlines: o Provide free, 24 - hour access to staff trained in suicide assessment and intervention o Thoroughly assess for risk of suicide, provide support, offer referrals, develop a safety plan, and dispatch emergency intervent ion, if necessary o Connect directly with local mobile crisis teams o Avert unnecessary ED visits and better ensure needed ED visits o Intervene when a caller is not willing or able to ensure his or her own safety Crisis centers have been shown to reduce emotional distress and suicidal ideation in callers ( Gould, Kalafat, Munfakh, & Kleinman, 2007 ; Kalafat, Gould, Munfakh, & Kleinman, 2007 ) . Preliminary findings from an evaluation of crisis center fol low - up to suicidal callers found that 80% of participants perceived the follow - up calls as helping at least a little in stopping them from killing themselves, while more than half of interviewed callers said the follow - up intervention helped a lot in stopp ing them from killing themselves. Callers who received more follow - up calls perceived the follow - up intervention to be more effective. Callers also perceived the intervention as more effective when counselors engaged in the following activities: discussi ng social contacts/settings as distractors; discussing social contacts to call when needing help; discussing warning signs; and exploring reasons for dying (Gould et al., unpublished) . LIFELINE CRISIS CENTER SURVEY (2015) A survey of the Lifeline network (N=134 of 16 5 centers) indicated that: o 91% (122) of Lifeline centers provide some form of follow up to callers o 38% (51) of Lifeline centers have a formal relationship with one or more E mergency D epartment s FOLLOW - UP RESOURCES o Structured Follow - Up and Monitoring: New York State O ffice of Mental Health (OMH) , Columbia University and the Lifeline partnered in the development of a 30 minute training module that demonstrates structured follow - up and monitoring for individuals after a crisis. Where to access: http://zerosuicide.actionallianceforsuicideprevention.org o MY3 APP: C reated in partnership with the California Mental Health Services Authority, MY3 is a highly customizable, free safety planning app for use during follow - up . Where to access: http://www.my3app.or

CRISIS CENTER FOLLOW UP TO SAVE RESOURCES AND SAVE LIVES

“Has there Ever Been A Greater Injustice In This world?

Amy, Morgan, and Steve. “The promises are never met…”. The UN is ineffectual, difficult to navigate, and values process over results.. There is a tendency to praise the UN for increasing resources for Africa, when this amount is nowhere near what is needed..

Using water at homeWe use water in many ways in our day-to-day lives.

ANYONE CAN REGISTER: Anyone, regardless of age, lifestyle or medical condition can register as a do

Patients with diabetes, hepatitis and other chronic conditions can potentially save and heal lives. . National Blue & Green Day is April 17. Celebrate the lifesaving gift of donation by wearing your brightest .

Save Water, Save life

Consciousness actions on How to save and protect water

We are the manufacturer of . the . Enviro-Save Engine & Power train . Protection . Metal Treatment.. Its for Life. Guaranteed & Proven since 1990. Common Sense Cost Reducer. Going Green Has Never Made More Sense .

The Life You Can Save Jefry Ang, Garret Dettner, Trae Givens,

Connor McGuire, Kristopher Overbo, Thomas Slayday. Overview of Singer’s Argument . Each of us, . individually. are responsible for taking definite action to prevent suffering in the world, irrespective of what others are doing..

Choose to Save Advanced Level

What is Saving?. Results in. Why Save?. Your present self impacts your future . self. By saving money . today. you will have financial security in the . future. What are examples of emergency expenses?.