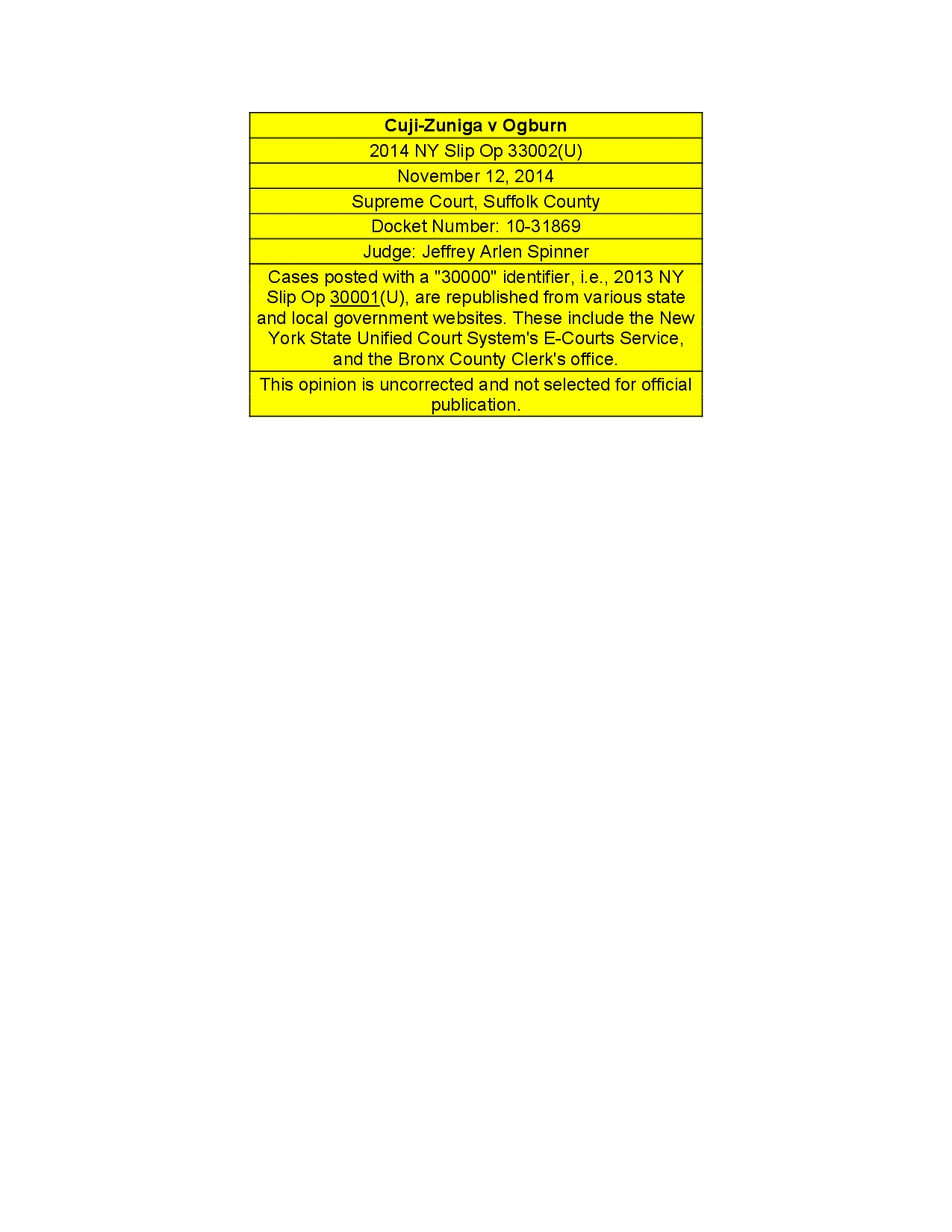 1 Cuji-Zuniga v Ogburn Index No. 10-3186
Cuji-Zuniga v Ogburn Index No. 10-31869 Page No. 6 Summary judgment is not appropriate in a medical malpractice where the parties adduce conflicting medical expert opinions (Shehebar v Boro Park Obstetrics and Gynecology, P. C., 106 AD3d 715, 964 NYS2d 239 [2d Dept 2013]; Feinberg v Feit, 23 AD3d 517, 806 NYS2d 661 [2d Dept 2005]; Shields v ,Baktidy, 11 AD3d 671, 783 NYS2d 652 [2d Dept 2004]. Plaintiff does not oppose this application, and Dr. Engelbert has placed responsibility for the treatment plan and care of the mother, and decisions and directions upon the treating attending physicians, he stated were adhered.to by the moving defendants. It is determined that these moving defendants have established prima facie entitlement to summary dismissal of the complaint as asserted against them. Based upon the failure of the plaintiff to raise any factual issue and to submit an expert affirmation which raises conflicting medical opinion with regard to the care and treatment provided by these moving defendants, summary dismissal of the complaint is not precluded. Accordingly, (003) is granted and the complaint, as asserted against the moving defendants, is dismissed. FINAL DISPOSITION X NON-FINAL DISPOSITION Cuji-Zuniga v Ogburn Index No. 10-31869 Page No. 5 screw maneuver. She did not know how much

2 time lapsed from the time the Woods' sc
time lapsed from the time the Woods' screw maneuver was employed until delivery of the anterior shoulder, following delivery of the posterior arm. She stated that an episiotomy was performed to facilitate delivery of the posterior arm. She believed there was a lapse of two minutes between delivery of the infant's head at 3:31 a.m. and the delivery of the shoulder at 3:33 a.m. She did not recall if traction was placed on the baby's head. Dr. Engelbert stated that the infant was given to NICU immediately due to Apgar scores of 0 at one minute, 3 at five minutes, and 5 at ten minutes. The infant weighed 9.38 pounds. The cord PH was 7.24, which was normal, stated Dr. Engelbert, however, Dr. Katkuri testified that the baby was acidotic at delivery, and that the Apgar score of 0 at one minute meant that the baby had no heart rate at one minute after its delivery. Dr. Engelbert opined that while there is a claim for failure to treat polyhydramnios, an increase in the amount of amniotic fluid, it was of no significance in this case, although he does not state why. Dr. Engelbert stated that Dr. Ogburn evaluated the prenatal sonograms which were normal, and fetal monitor strips during the course of labor. However, Dr. Engelbert did not indicate whether or not those fetal monitor strips were normal or if they revealed any

3 problems with the fetal heart rate. It i
problems with the fetal heart rate. It is noted that Dr. Katkuri testified that there was a two minute long deceleration after the epidural was administered. She stated that she discussed it with the junior resident and the attending Dr. Ogburn, and it was thought the deceleration may have been secondary to the epidural. She later testified that the deceleration may have been due to the mother having hypotension of 96/46, at which time resuscitation was done by giving the mother oxygen and placing her on her left side in lateral tilt, and giving the mother a bolus of intravenous fluid. A fetal scalp electrode was then on the fetus' head to monitor the fetal heart rate and status of the baby. She continued that the fetal heart rate had dropped from 150 to 100, but there was still moderate variability with recovery noted, as the baseline fetal heart tracing returned to normal. She described the delivery and stated the infant was intubated and resuscitated after delivery. Dr. Katkuri testified that neonatal head cooling is done when there is concern for hypoxic ischemic encephalopathy. Dr. Katkuri stated that they did not consider pushing the baby back into the uterus, a Zavanelli maneuver, and then doing a cesarean section when the shoulder dystocia was encountered. Dr. Engelbert continued that the residents were

4 overseen at all times by the attending
overseen at all times by the attending obstetricians, including Dr. Ogburn who was present for the delivery. He stated that while it is unknown which residents or whether Dr. Ogburn performed the maneuvers for shoulder dystocia, Dr. Ogburn was present and supervised the delivery and the maneuvers used, which maneuvers were done within the standard of care. Dr. Engelbert does not provide the standard of care for a baby which is 9 pound 8 ounces, with shoulder dystocia, and a tight nuchal cord, but he stated that none of the treatment plans or directions by the attending physicians deviated from normal medical obstetrical practice. There were no decisions made by Dr. Katkuri, Dr. Weil and Dr. Turkewitz with regard to performance of a cesarean section, stated Dr. Engelbert, however, he does not opine whether or not a cesarean section was indicated or necessary in this situation, and whether the injuries to the infant could have been avoided by performing a cesarean section. A resident who assists a doctor during a medical procedure, and who does not exercise any independent medical judgment, cannot be held liable for malpractice so long as the doctor's directions do not so greatly deviate from normal practice that the resident should be held liable for failing to intervene (McLaughlin et al v Royek et al, 2007 NY Slip O

5 p 31281 U; 2007 NY Misc Lexis 9013 [
p 31281 U; 2007 NY Misc Lexis 9013 [Sup Ct, Suffolk County 2007]. Here it has been demonstrated that the moving defendants did not exercise any independent judgment. Dr. Engelbert opined that the attending doctor's directions did not so deviate from normal practice that the resident should be held liable for failing to intervene Cuji-Zuniga v Ogburn Index No. l 0-31869 Page No. 4 fluid index was obtained. On February 12, 2008, stated Dr. Engelbert, Dr. Quirk and resident Patrowsky evaluated the infant's mother and noted fetal movement and contractions, but no leakage of fluid. On February 19, 2008, when the plaintiff was seen "by an attending" and James, the plan of care was for the induction of labor at 41 weeks gestation if the mother did not deliver by the next visit. The sonogram, at 39 weeks 2 days gestation, revealed that the estimated fetal weight was 3812 grams, which is greater than the 90th percentile. Polyhydrarnnios (increased amniotic fluid) was also noted. Biophysical profile was 8/8, and the estimated due date of February 24, 2008 was confirmed. Dr. Engelbert stated that on February 26, 2008, at 40 weeks 2 days gestation, the infant's mother was seen by Dr. Quirk and resident James for possible rupture of membranes and decreased fetal movement since the night before. Her cervi

6 x was 1 cm dilated and 90% effaced, wi
x was 1 cm dilated and 90% effaced, with a vertex presentation at -3 station, so she was admitted at 11 a.m. to Stony Brook University Hospital and sent to labor and delivery. At 12:50 p.m., Dr. Turkewitz performed a history and physical and discussed her findings and plan with attending Dr. Griffin. There were no contractions demonstrated by tocometer, and the fetal heart rate was in the 130s. Dr. Engelbert stated that Dr. Griffin reviewed the fetal monitor strips and found them reassuring. The assessment and plan was for induction with Pitocin. Dr. Turkewitz performed a vaginal exam at 2:55 p.m. and inserted a Foley Bulb to aid labor induction. Pitocin was at 2 milliunits. At 4 p.m., Dr. Weil added another admission summary and plan of care which was discussed with Dr. Griffin. Pitocin was at 4 milliunits. At 4: 13 p.m., minimal variability was noted with no decelerations on the fetal monitor strips. Dr. Engelbert stated that at 5:27 p.m., Dr. Weisman documented the cervix was 4 cm dilated, and 80% effaced with the vertex at -2 station, so the Foley Bulb was removed and the membranes were artificially ruptured, revealing clear fluid. Dr. Engelbert stated that Dr. Ogburn entered a note at 6:50 p.m., noting the mother was stable, fetal heart rate in the 140s, Pitocin continued, and cervix advancing. He coun

7 tersigned Dr. Turkewitz's note of 5 :45
tersigned Dr. Turkewitz's note of 5 :45 p.m. which indicted cervix was 5 cm dilated, 80 % effaced with the vertex at -1 station. He discussed the progression of labor and continued that on February 27, 2008, at 12:32 a.m. the mother's cervix was 9 cm dilated, 100 % effaced, with the vertex at 0 station. Full dilation was at 12:58 a.m., with I 00 % effacement, and the vertex was at +I station, at which time the mother began to push. Dr. Katkuri, a third year resident, entered a note at 1 :30 a.m. noting the mother had discomfort and had been pushing ineffectively for 30 minutes with no good effort, despite coaching and teaching. The mother was then placed in a high F owlers position to labor down, fully dilated at + 1 station, with fetal tracing in the 130s to 140s with accelerations. Dr. Katkuri documented that she discussed with Dr. Ogburn that the mother was to labor down and be monitored. At 4:20 a.m., Dr. Katkuri documented that the mother had rested for one and a half hours, and resumed pushing. Dr. Engelbert stated that at 4:20 a.m., Dr. Katkuri wrote a delivery note documenting Dr. Ogburn assisted with the delivery. The fetal head delivered at 3:31 a.m. There was a tight nuchal cord which was clamped and cut. Dr. Katkuri testified that when the nuchal cord was cut, the baby had testified that