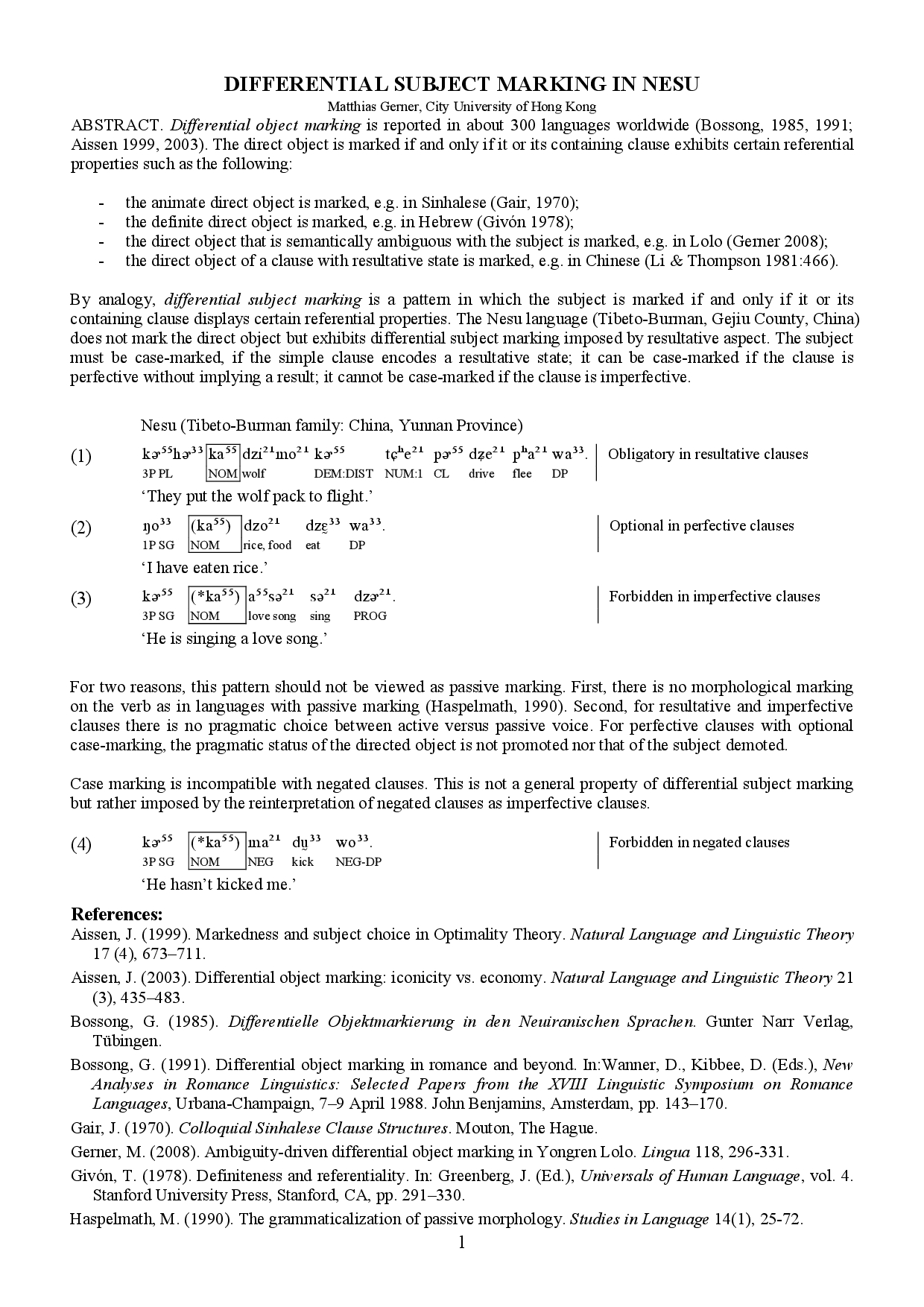 Understanding the causes and consequences of major court rulings has l

1 1 DIFFERENTIAL SUBJECT MARKINGNESUatth
1 DIFFERENTIAL SUBJECT MARKINGNESUatthias Gerner, City University of Hong KongABSTRACT. Differential object markingis reported in about 300 languages worldwide (Bossong, 1985, 1991; Aissen 1999, 2003). The direct object is marked if and only if it or its containing clause exhibits certain referential properties such as the following: the animate direct object is marked, e.g. in Sinhalese (Gair, 1970);the definite direct object is marked, e.g. in Hebrew (Givón 1978); the direct object that is semantically ambiguous with the subject is marked, e.g. in Lolo (Gerner 2008); the direct object of a clause with resultative state is marked, e.g. in Chinese (Li & Thompson 1981:466).By analogy, differential subject markingis a pattern in which the subject is marked if and only if it or its containi ( 1 ) Ob汩ga瑯ry⁩n resu汴a瑩ve⁣污uses 3P PL NOM wolf DEM:DIST NUM:1 CL drive flee DP They put the wolf pack to flight ( 2 ) Optional in perfective clauses 1P SG NOM rice, food eat DP ‘ ( 3 ) F潲扩摤en⁩渠im灥rfecti癥⁣la畳es 3 P SG NOM love song sing PROG He is singing a love song.For two reasons, this pattern should not be viewed as passive marking. Firstthere is no morphological marking on the verb as in languages with passive marking (Haspelmath, 1990). Second, for resultative and imperfective clauses there is no pragmatic choice between active versus passive voice. For perfective clauseswith optional marking, the pragmatic status of the directed object is not promoted nor that of the subject demoted. Case marking is incompatible with negated clauses. This is not a general property of differential subject marking but rather imposed by the reinterpretation of negated clauses as imperfective clauses. ( 4 ) Forbidden in negated clauses 3P SG NOM NEG kick NEG - DP He hasn’t kicked meReferencesAissen, J.1999. Markedness and subject choice in Optimality Theory. Natural Language and Lingu

For favor of posting

The civic university and the city

Do you know…? JUPAS UGC-funded