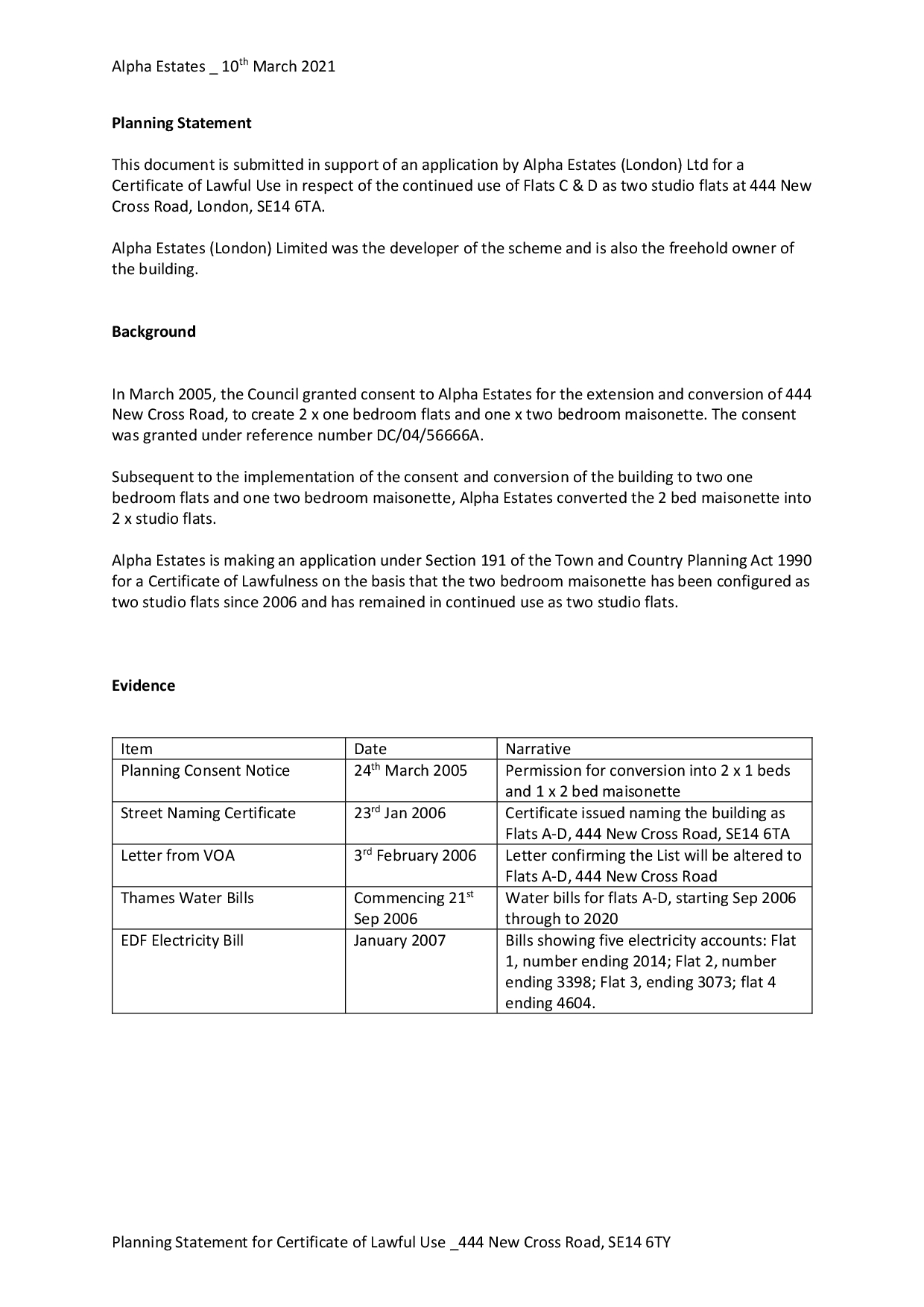 1 Al p ha Estates _ 10 th M arch 2021
Al p ha Estates _ 10 th M arch 2021 Planning S tatement for C ertifi cate of Lawful Use _444 New Cross Road, SE14 6TY Planning Statement This document is submitted in support of an application by Alpha Estates (London) Ltd for a Certificate of Lawful Use in respect of the continued use of Flats C & D as two s tudio flats at 444 New Cross Road, London, SE14 6TA . Alpha Estates (London) Limite d was the developer of the scheme and is also the freehold owner of the building. Background In March 2005, the Council granted consent to Alpha Estates for the extension and conversion of 444 New Cross Road, to create 2 x one bedroom flats and one x two bedroom maisonette. The consent was granted under reference number DC/04/56666A. Subsequent to the implementation of the consent and conversion of the building to two one bedroom flats and one two bedroom maisonette , Alpha Estates converted the 2 bed maisonette into 2 x studio flats. Alpha Estates is making an application under Section 191 of the Town and Country Planning Act 1990 for a Certificate of Lawfulness on the basis that the two bedroom maisonette has been configured as two studio flats sinc e 2006 and has remained in continued use as two studio flats. Evidence Item Date Narrative Planning Consent Notice 24 th March 2005 Permission for conversion into 2 x 1 beds and 1 x 2 bed maisonette Street Naming Certificate 23 rd Jan 2006 Certificate issued naming the building as Flats A - D, 444 New Cross Road, SE14 6TA Letter from VOA 3 rd February 2006 Letter confirming the List will be altered to Flats A - D, 444 New Cross Road Thames Water Bills Commencing 21 st Sep 2006 Water bills for flats A - D, starting Sep 2006 through to 2020 EDF Electricity Bill January 2007 Bills showing five electricity accounts: Flat 1, number ending 2014; Flat 2, number ending 3398; Flat 3, ending 3073; flat 4 ending 4604.

Celebrate someone special with a custom bouquet. Using only the freshest flowers and a lot of imagination, our designers will create a bouquet that's beautifully unlike any others.

Trusts and Estates Law & Tax JournalSeptember 2013Simon Atkinson is a

The Estates General France Pushes for Democracy (1789) May 1789. For the first time in over 175 years, the Estates General meets. Prior to the meeting the King ordered the representatives of each estate to compile a list of grievances to be discussed at the meeting; known as

http://safeshare.tv/v/wXsZbkt0yqo Click link to watch video The Old Regime The people in French society were not treated equally. The system of feudalism in France was known as “The

Chapter 6 The French Revolution and Napoleon

Section 1. On the Eve of Revolution. French Society Divided. In 1787, France like the rest of Europe, still clung to an outdated social system that had emerged in the Middle Ages. Under this old system, which was called the .

Prospects for the Irish

The French Revolution: Background and Beginning

introduction. As we’ve learned, in French society the people were divided into 3 categories called the three estates. . Each estate has specific roles. Let’s review them…. First estate-Clergy-the church.

Trusts and Estates Law Section Newsletter Vol. 45 No. 1 13 requirements do have a signi cant purpose. Aside from eliminating disputes regarding the essential terms of an agreement, these require

Bellringer Turn in your homework to the bin, and take out a highlighter—only a highlighter. Everything else should be away.

Bellringer Turn in your homework to the bin, and take out a highlighter—only a highlighter. Everything else should be away. BJOTD: Why couldn’t the shoes go out and play? The Causes of the French Revolution

Defeasible Estates. Grant of land that is, in some manner, . conditional . [not “absolute”]. Grantee could lose the “bundle of sticks”. Conditions may be added to:. Fee Simple. Life Estate. Term for Years.