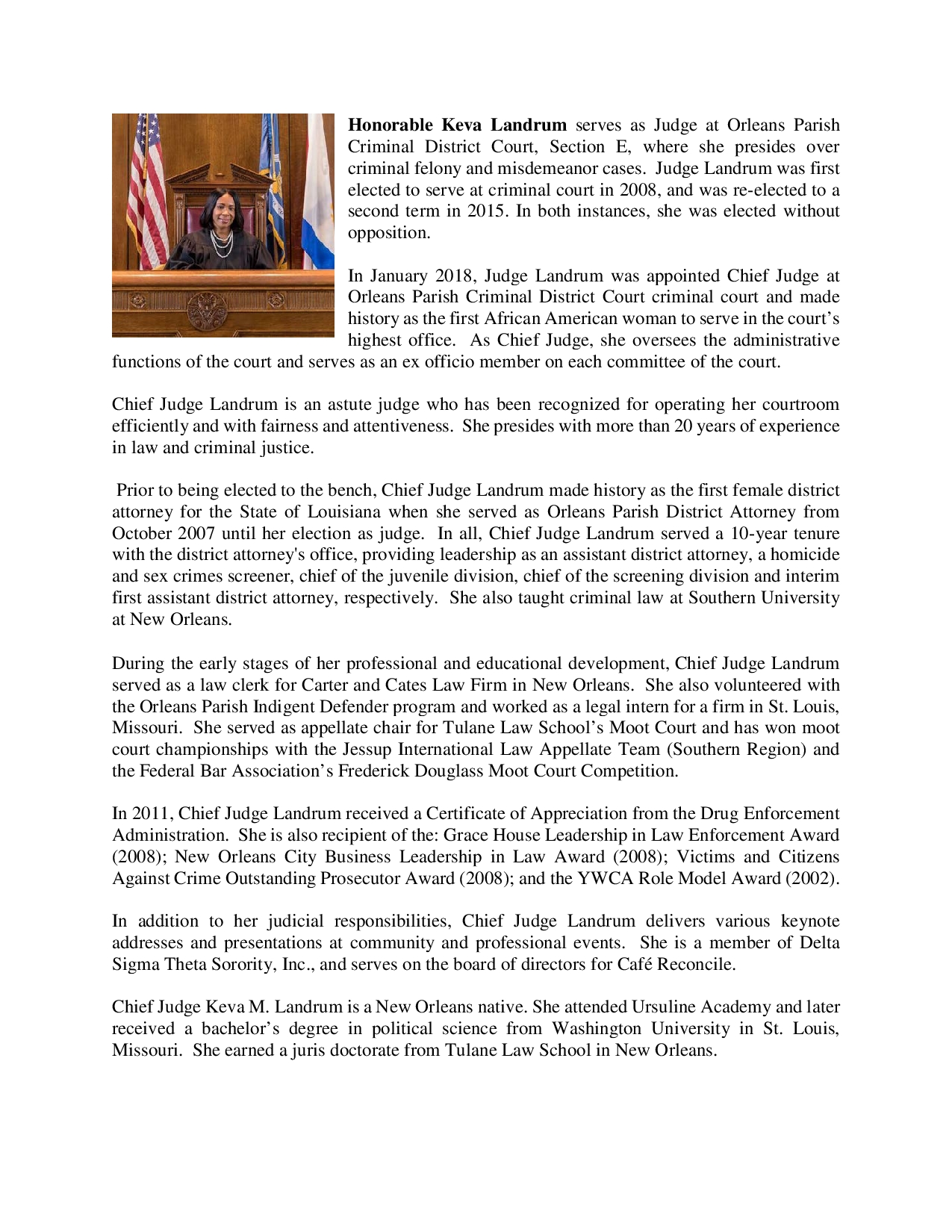 1 Honorable Keva Landrumserves as Judge at
Honorable Keva Landrumserves as Judge at Orleans Parish Criminal District Court, Section E, where she presides over criminal felony and misdemeanor cases. Judge Landrum was first elected to serve at criminal court in 2008, and was reelected to a second term in 2015. In both instances, she was elected without opposition. In January 2018, Judge Landrum was appointed Chief Judge at Orleans Parish Criminal District Court criminal court and made history as the first African American woman to serve in the court’s highest office. As Chief Judge, she oversees the administrative functions of the court and serves as an ex officio member on each committee of the court. Chief Judge Landrum is an astute judge who has been recognized for operating her courtroom efficiently and with fairness and attentiveness. She presides with more than 20 years of experience in law and criminal justice. Prior to being elected to the bench, Chief Judge Landrum made history as the first female district served as a law clerk for Carter and Cates Law Firm in New Orleans. She also volunteered with the Orleans Parish Indigent Defender program and worked as a legal intern for a firm in St. Louis, Missouri. She served as appellate chair for Tulane Law School’s Moot Court and has won moot the Federal Bar Association’s Frederick Douglass Moot Court Competition. In 2011, Chief Judge Landrum received a Certificate of Appreciation from the Drug Enforcement Administration. She is also recipient of the: Grace House Leadership in Law Enforcement Award (2008); New Orleans City Business Leadership in Law Award (2008); Victims and Citizens In addition to her judicial responsibilities, Chief Judge Landrum delivers various keynote addresses and presentations at community and professional events. She is a member of Delta Sigma Theta Sorority, Inc., and serves on the board of directors for Café Reconcile. received a bachelor’s degree in political science from Washington University in St. Louis, Missouri.She earned a juris doctorate from Tulane Law School in New Orleans.

MRP: Rs. 59, Pack Size: 25 g. Skin under eyes is very soft and delicate . plus do . not have oil glands which can lead to wrinkles and discoloration of under eye part. . Problem. Problem. Dark circles can be caused due to various reasons. Stress, fatigue, lack of sleep, dehydration, working for long hours in front of a computer, incorrect ways of removing eye makeup etc..

7827719099 . website : . www.franchisebatao.com. Keva Industries provides an opportunity to explore your potential & achieve your dreams of ‘Health & Better living’. Keva helps in Direct selling business plans & a versatile range of products. The company has a countrywide sales and marketing network in India. It has a vibrant sales force consisting of professionally trained and highly motivated marketing and sales team and efficient forwarding agents all over India to make its products available at all places and at all times. Keva believes in empowering people with the opportunity to lead their lives on their terms. It has continued to enrich the lives of everyone who is a part of the company and those who believe in its products.

Judge Motley has been an active member of the Thurgood Marshall Inn of Court since its founding in 1990. He was a member of Big Brothers/Big Sisters of the National Capital Area for ten years, and i

SAFETY PLAYBOOK kevasports .com COVID-19 RESPONSE PLAN: Guidelines, Policies, and Procedures to Keep the KEVA Community Safe and Healthy As we work together to re-open KEVA amid a global pandemic,

REQUIREMENTS FOR OBTAINING A MARRIAGE LICENSE

IT IS ORDERED AND ADJUDGED that pursuant to this Court

insufficient evidence to support the conviction pertaining to Jones and claims error in On March 29, 2004, jailer Arlen Whitley brought Jones, a prisoner at thefacility, to the detoxification (detox)

HOW OFTEN SHOULD YOUR POOCH GET A WELLNESS CHECK?

Preventative measures for your pet’s health are equally as important as they are for humans, if not more so, as our pets can’t communicate any potential health concerns to us. Catching illnesses early on, or better yet, preventing them altogether, will give your pet a happier, healthier and longer life, and so just as we might go for a routine health check-up once a year, so should your beloved pooch.

Dogs have a language of their own that enables them to communicate their emotional state and intentions to their owners, and others around them. Most of their communication methods will be displayed through their body language, and more specifically, their facial expressions and the posture of their body. Dogs also use sounds and signals, and most will be familiar with these already, such as growling and barking when spooked, angry or edgy. But for understanding their body language, here are a few tips and pointers to interpret how a dog may be trying to communicate their feelings to you:

WHY EVERY PET OWNER SHOULD BE A POOP INSPECTOR

Dog poop can tell you a lot about a dog’s overall health, and while it often stinks to high heaven and is kinda gross, bending down to take a closer look at what Fido has produced can be beneficial!

CAN YOU PAMPER YOUR POOCH TOO MUCH?

Your pet dog is probably like a member of the family to you, and so of course you want to spoil them and make them feel loved and content. You might want to buy them all the latest toys, dress them in expensive pet outfits or take them to the grooming parlour once a week. With dogs increasingly seen as extensions of us, it’s easy to see why they are pampered and groomed to meet human standards, whether it’s wholly necessary for their wellbeing, or not. However, for good pet owners, who want to raise balanced, healthy pet dogs, the desire to treat them as we might like ourselves to be treated, should be resisted wherever possible.

HOW TO PREVENT FOOD AGGRESSION WITH YOUR NEW PUP

When pups or adult dogs guard their possessions against humans, we can generally consider that to be normal behavior. Dogs in the wild need to protect things such as food, mates and territories, and those that do so successfully, are more likely to survive. However, when talking about domesticated pets, those sorts of traits are not welcomed and can give pet owners many problems.

A dogs’ bark is of course their main form of verbal communication, and in many pets, it’s not a problem and can even be a good form of defense for homeowners. However, some dogs bark excessively, and being able to identify the cause of such barking, is the first step towards understanding and curbing your pets unwanted verbal communications.

A. D.: New Orleans After the Deluge

Alex Liu. The Flood. Denise reunites with her family at the hospital, and the four are transported to a convention center. There, she witnesses the collapse of authority firsthand.. In Houston, Leo and Michelle learn about the floods and the probable loss of Leo’s comics. They decide to travel to St. Louis and stay with Leo’s parents..