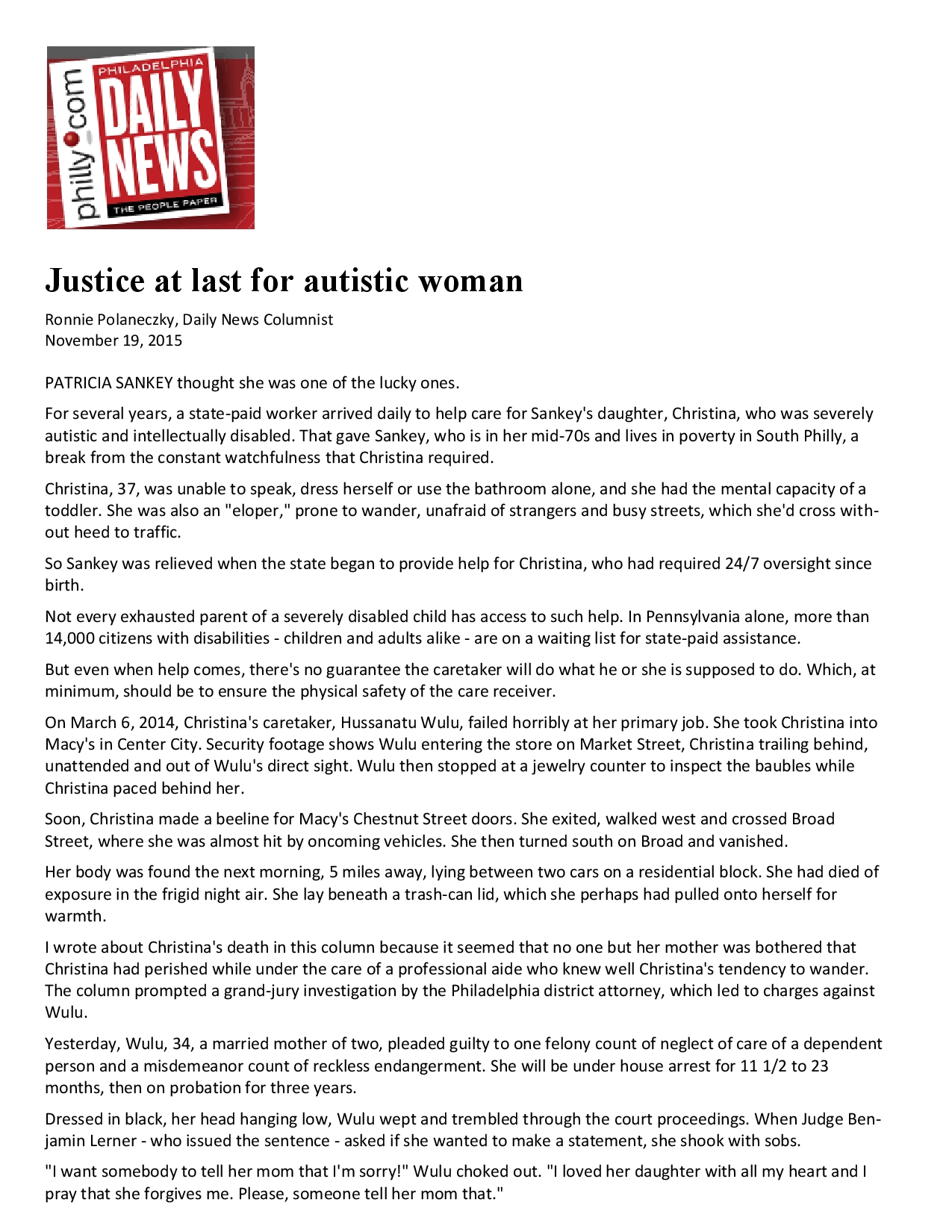 Justice at last for autistic woman

Document on Subject : "Justice at last for autistic woman"— Transcript:

1 Justice at last for autistic woman Ron
Justice at last for autistic woman Ronnie Polaneczky, Daily News Columnist November 19, 2015 PATRICIA SANKEY thought she was one of the lucky ones. For several yea rs, a state - paid worker arrived daily to help care for Sankey's daughter, Christina, who was severely autistic and intellectually disabled. That gave Sankey, who is in her mid - 70s and lives in poverty in South Philly, a break from the constant watchfulness that Christina required. Christina, 37, was unable to speak, dress herself or use the bathroom alone, and she had the mental capacity of a toddler. She was also an "eloper," prone to wander, unafraid of strangers and busy streets, which she'd cross wit h- o ut heed to traffic. So Sankey was relieved when the state began to provide help for Christina, who had required 24/7 oversight since birth. Not every exhausted parent of a severely disabled child has access to such help. In Pennsylvania alone, more than 14,000 citizens with disabilities - children and adults alike - are on a waiting list for state - paid assistance. But even when help comes, there's no guarantee the caretaker will do what he or she is supposed to do. Which, at minimum, should be to ensure the physical safety of the care receiver. On March 6, 2014, Christina's caretaker, Hussanatu Wulu, failed horribly at her primary job. She took Christina into Macy's in Center City. Security footage shows Wulu entering the store on Market Street, Christin a trailing behind, unattended and out of Wulu's direct sight. Wulu then stopped at a jewelry counter to inspect the baubles while Christina paced behind her. Soon, Christina made a beeline for Macy's Chestnut Street doors. She exited, walked west and cros sed Broad Street, where she was almost hit by oncoming vehicles. She then turned south on Broad and vanished. Her body was found the next morning, 5 miles away, lying between two cars on a residential block. She had died of exposure in the frigid night ai r. She lay beneath a trash - can lid, which she perhaps had pulled onto herself for warmth. I wrote about Christina's death in this column because it seemed that no one but her mother was bothered that Christina had perished while under the care of a profes sional aide who knew well Christina's tendency to wander. The column prompted a grand - jury investigation by the Philadelphia district attorney, which led to charges against Wulu. Yesterday, Wulu, 34, a married mother of two, pleaded guilty to one felony c ount of neglect of care of a dependent person and a misdemeanor count of reckless endangerment. She will be under house arrest for 11 1/2 to 23 months, then on pro

2 bation for three years. Dressed in bla
bation for three years. Dressed in black, her head hanging low, Wulu wept and trembled throu gh the court proceedings. When Judge Be n- jamin Lerner - who issued the sentence - asked if she wanted to make a statement, she shook with sobs. "I want somebody to tell her mom that I'm sorry!" Wulu choked out. "I loved her daughter with all my heart and I pray that she forgives me. Please, someone tell her mom that." It was a wrenching moment, a god - awful coda to Christina's god - awful death. But for Sankey, Wulu's remorse means little, she told me when I called to share Wulu's message. Sankey hadn't had the fortitude to attend the hearing because she couldn't bear to lay eyes on the woman "who'd rather bury her nose in a jewelry counter than l ook out for my daughter." "I think she should have gotten at least a year in jail for what she did," says Sankey, whose surviving adult daughter, Liza, 36, is also intellectually disabled but verbal and more capable than Christina had been. "She still ha s her family. She still has both her children. My family is broken forever," says Sankey, who says her husband abandoned her when the girls were toddlers and as the severity of their disabilities became apparent. "We were three and now we are two. Her apol ogy will not bring back our Christina." Liza, she says, spends time every day in front of the living - room mantelpiece, where a photo of Christina stands alongside the red - and - white urn of her ashes. She says good morning and good night to her sister. She describes her day at Hall - Mercer Community Mental Health Center, where she receives support services. She tells her that Thanksgiving is coming, that she and mom will make all of their favorite foods. She reminds her that Christmas will follow, that they will buy gifts for her the way they did last year, their first Christmas without her. "Christina loved balls," sighs Sankey. "Last year, we had so many balls under the tree. Liza wants us to buy more balls. My house is filled with balls." As she talks, I think about Wulu, whose anguish seemed genuine and who fled the courtroom in tears. She's a young woman with years ahead of her to ponder the worst decision she ever made. As it is for Sankey and Liza, Wulu's life is now split into two worlds - the one be fore Christina's death, the one after. Is house arrest enough of a punishment? I don't know, honestly. Sankey's lawyer, Tom Kline, told me he just hopes Wulu is truly remorseful for "the avoidable death which causes pain every day to Christina's mother an d sister." Rest in peace, Christina. You've had your day in court. And you were not forgotten.

Justice at last for autistic woman

Involving autistic people in the design, development and ev

Argibay. . A woman who honored the fatherland…. . . . Susana . Medina. . . . The first woman who was proposed to integrate the Supreme Court of Justice in Democracy, because of its deep and unwavering republican convictions..

AUTISM . By: Disyapa PAN Sivamoklukana. How to integrate Autism into a regular Art Class. Autism . is a severely incapacitating developmental disorder of brain function characterized by three major types of symptoms: impaired social interaction, problems with verbal and nonverbal communication, and unusual or severely limited activities and interests..

Presents. All You Ever Wanted to Know . About. Autism. Prepared in partial satisfaction . of the requirements for . GPC 126, Physiological Psychology. Spring Semester, 2016. METU-NCC. İrem Çuhadar.

Current Events. Round 2. 1. Science/ Technology. An . announcement was made in . July. Physicists . said that they had discovered a new subatomic particle, a key to understanding why there is diversity and life in the universe. The particle was discovered through work by the Center for Nuclear Research using the Large .

Challenge of working for Justice

Presentation for CORI AGM. Sheila Curran RSM. To look at the challenges of the work . of justice . in responding to the “signs of the times” in relation to the “other” who is different to ourselves..

An insider’s critique of the

T. ammet. Book title: Born on a blue day. Author: Daniel . Tammet. This power point is made and presented by . C. amryn. Horst. He was born on January 31, 1979 in the UK. Child years. In his childhood from o-2 he wouldn’t stop crying, and it was a problem. They said that his daily things are going to be delayed..

Of the Dog in the Night Time. Crossover Text. Whitbread Award Winner (2003). Rather unsentimental portrayal (compared to typical condescending sympathetic seriousness) . Really Unreliable Narrator (inscribed as normal and rational); his exceptionality is the normative basis for the narrative (Kevin as secondary voice and .

Gaze Fixation and the Neural Circuitry of Face

Autism. In its purest form the definition of autism . is a mental condition, present from early childhood, characterized by great difficulty in communicating and forming relationships with other people and in using language and abstract concepts. Special usage: a mental condition in which fantasy dominates over reality, as a symptom of schizophrenia and other disorders..

A Dashboard for Managing Resources

The . client: The National Autistic Society. The . leading UK charity for autistic people (including those with Asperger syndrome) and their . families.. The client’s . problem. How should the NAS (1) allocate personnel time across different channels to provide support to autistic people or their families, and (2) convince donors about the benefits that could be provided with more resources?.