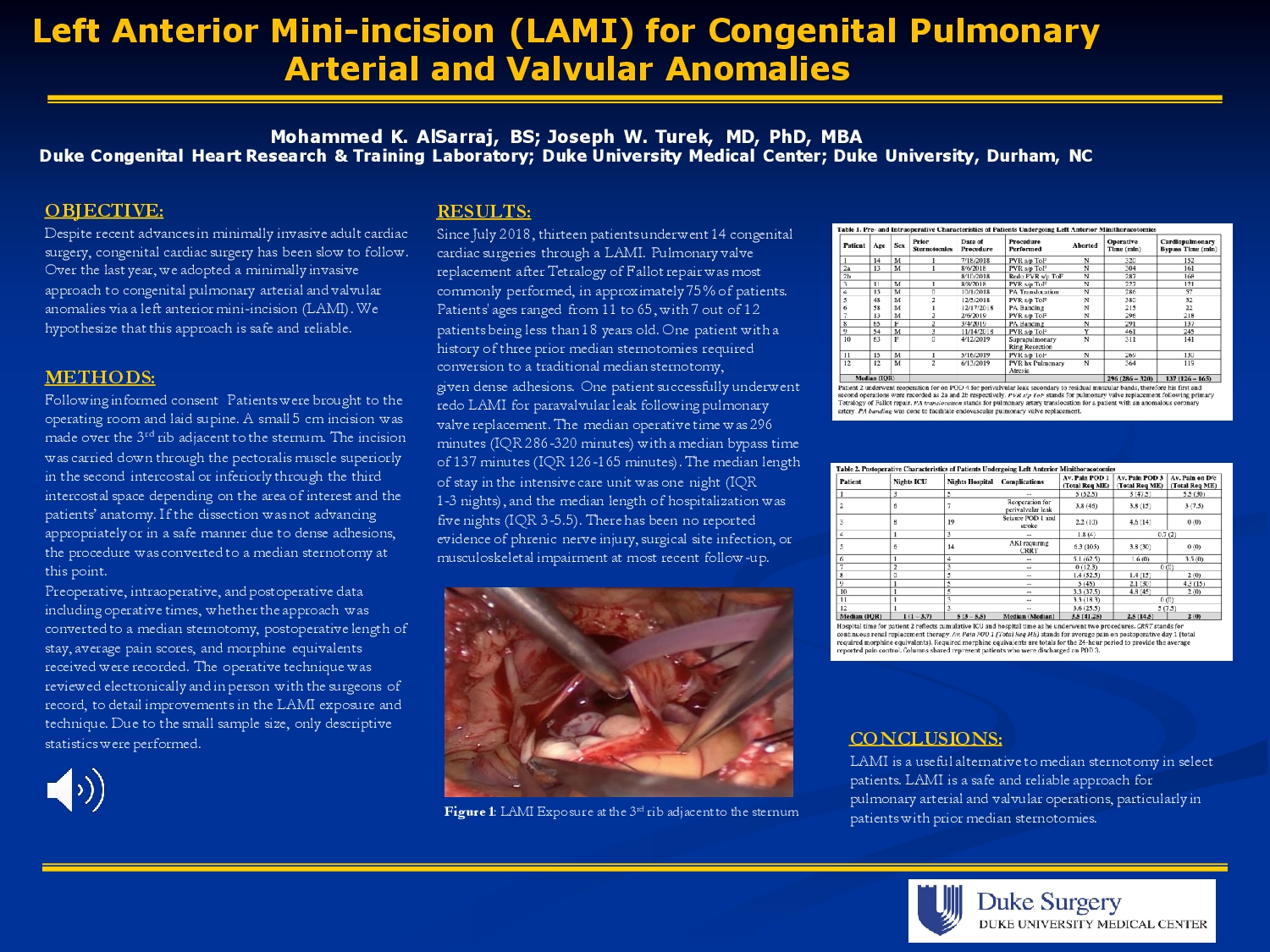 Per recommendation and approval of Northeastern University academic ad

Everything to Know About

1 Left Anterior Mini - incision (LAMI) for
Left Anterior Mini - incision (LAMI) for Congenital Pulmonary Arterial and Valvular Anomalies Mohammed K. AlSarraj , BS; Joseph W. Turek , MD, PhD, MBA Duke Congenital Heart Research & Training Laboratory; Duke University Medical Center; Duke University, Durham, NC OBJECTIVE: Despite recent advances in minimally invasive adult cardiac surgery, congenital cardiac surgery has been slow to follow. Over the last year, we adopted a minimally invasive approach to congenital pulmonary arterial and valvular anomalies via a left anterior mini - incision (LAMI). We hypothesize that this approach is safe and reliable. METHODS: Following informed consent Patients were brought to the operating room and laid supine. A small 5 cm incision was made over the 3 rd rib adjacent to the sternum. The incision was carried down through the pectoralis muscle superiorly in the second intercostal or inferiorly through the third intercostal space depending on the area of interest and the patients’ anatomy. If the dissection was not advancing appropriately or in a safe manner due to dense adhesions, the procedure was converted to a median sternotomy at this point. Preoperative, intraoperative, and postoperative data including operative times, whether the approach was converted to a median sternotomy, postoperative length of stay, average pain scores, and morphine equivalents received were recorded. The operative technique was reviewed electronically and in person with the surgeons of record, to detail improvements in the LAMI exposure and technique. Due to the small sample size, only descriptive statistics were performed. RESULTS : Since July 2018, thirteen patients underwent 14 congenital cardiac surgeries through a LAMI. Pulmonary valve replacement after Tetralogy of Fallot repair was most commonly performed, in approximately 75% of patients. Patients' ages ranged from 11 to 65, with 7 out of 12 patients being less than 18 years old. One patient with a history of three prior median sternotomies required conversion to a traditional median sternotomy, given dense adhesions. One patient successfully underwent redo LAMI for paravalvular leak following pulmonary valve replacement. The median operative time was 296 minutes (IQR 286 - 320 minutes) with a median bypass time of 137 minutes (IQR 126 - 165 minutes). The median length of stay in the intensive care unit was one night (IQR 1 - 3 nights), and the median length of hospitalization was five nights (IQR 3 - 5.5). There has been no reported evidence of phrenic nerve injury, surgical site infection, or musculoskeletal impairment at most recent follow - up. CONCLUSIONS : LAMI is a useful alternative to median sternotomy in select patients. LAMI is a safe and reliable approach for pulmonary arterial and valvular operations, particularly in patients with prior median sternotomies. Figure 1 : LAMI Exposure at the 3 rd rib adjacent to the sternum

Biomechanics of Mini-Implant Placed in the Palate

and Endings B. End of Course Revision Tutorial. Henry Lin and Arty . Selvanathan. THE UNIVERSITY OF NEW SOUTH WALES. MEDICAL SOCIETY.  . www.medsoc.org.au. As promised!. “Chance to win a trip to Fiji”.

PRESENTED BY- Dr. CHITRA. MODERATOR-. Dr.AJAY. SOOD. Respiratory System. TRACHEA. It is a cartilaginous and membranous tube. EXTENT - from 6. th. cervical vertebra till the body of 5. th. thoracic vertebra.

The Pelvic Girdle and Lower Limb

A RARE CONGENITAL ANOMALY OF CORONARY ARTERY. BACKGROUND. Congenital coronary artery anomalies are rare, often an incidental finding in asymptomatic patients.. They occur in 1% of all congenital heart disease..

Organization of the Human Body

Dr. Nándor Nagy. Handed asymmetry. is the term that denotes anatomic differences on the left and right sides of the body. . - . While the body is. outwardly symmetrical, most internal organs are asymmetrical with respect to the.