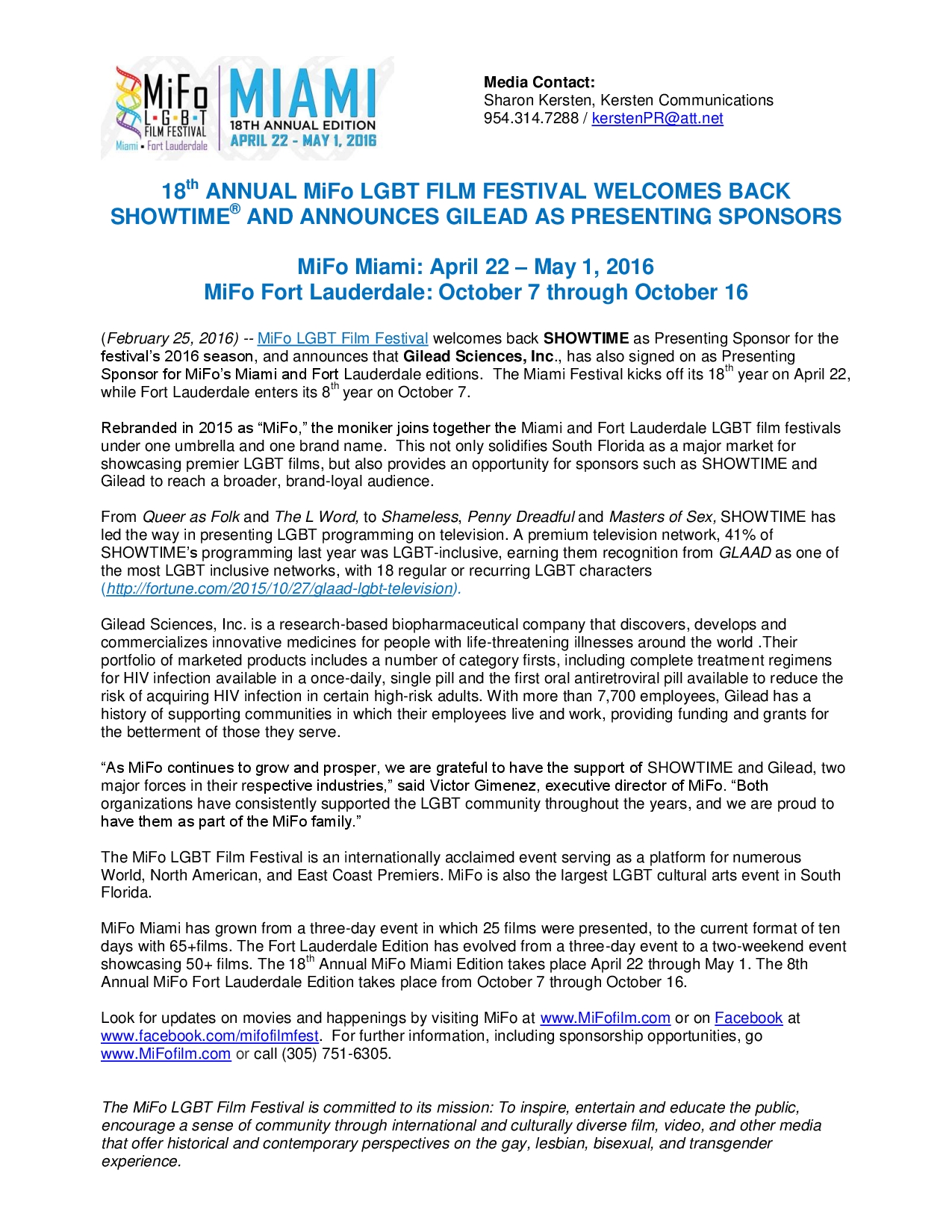 1 18 th ANNUAL MiFo LGBT FILM FESTIVA
18 th ANNUAL MiFo LGBT FILM FESTIVAL WELCOMES BACK SHOWTIME ® AND ANNOUNCES GILEAD AS PRESENTING SPONSOR S MiFo Miami: April 22 â€“ May 1, 2016 MiFo Fort Lauderdale: October 7 through October 16 ( February 25, 2016) -- MiFo LGBT Film Festival welcomes back SHOWTIME as Presenting Sponsor for the festivalâ€™s 2016 season , and announces that Gilead Sciences, Inc . , has also signed on as Presenting Sponsor for MiFoâ€™s Miami and Fort L auderdale editions. T he Miami Festival kicks off its 18 th year on April 22, while Fort Lauderdale enters its 8 th year on October 7. Rebranded in 2015 as â€śMiFo,â€ť the moniker joins together the Miami and Fort Lauderdale LGBT film festivals under one umbre lla and one brand name. This not only solidifies South Florida as a major market for showcasing premier LGBT films, but also provides an opportunity for sponsors such as SHOWTIME and Gilead to reach a broader, brand - loyal audience. F rom Queer as Folk an d The L Word, to Shameless , Penny Dreadful and Masters of Sex, SHOWTIME has led the way in presenting LGBT programmi ng on television. A premium television network, 41% of SHOWTIME â€™s programming last year was LGBT - inclusive , earning them recognition from GL AAD as one of the most LGBT inclusive networks , with 18 regul ar or recurring LGBT characters ( http://fortune.com/2015/10/27/glaad - lgbt - television ). Gilead Sciences, Inc. is a research - bas ed biopharmaceutical company that discovers, develops and commercializes innovative medicines for people with life - threatening illnesses around the world .Their portfolio of marketed products includes a number of category firsts, including complete treatme nt regimens for HIV infection available in a once - daily, single pill and the first oral antiretroviral pill available to reduce the risk of acquiring HIV infection in certain high - risk adults . With more than 7,700 employees, Gilead has a history of support ing communities in which their employees live and work, providing funding and grants for the betterment of those they serve. â€śAs MiFo continues to grow and prosper, we are grateful to have the support of SHOWTIME and Gilead, two major forces in their res pective industries,â€ť said Victor Gimenez, executive director of MiFo. â€śBoth organizations have consistently supported the LGBT community throughout the years, and we are proud to have them as part of the MiFo family.â€ť The MiFo LGBT Film Festival is an int ernationally acclaimed event serving as a platform for numerous World, North American, and East Coast Premiers. MiFo is also the largest LGBT cultural arts event in South Florida. MiFo Miami has grown from a three - day event in which 25 films were present ed, to the current format of ten days with 65+films. The Fort Lauderdale Edition has evolved from a three - day event to a two - weekend event showcasing 50+ films. The 18 th Annual MiFo Miami Edition takes place April 22 through May 1. The 8th Annual MiFo Fort Lauderdale Edition takes place from October 7 through October 16. Look for updates on movies and happenings by visiting MiFo at www.MiFofilm.com or on Facebook at www.facebook.com/mifofilmfest . For further information, including sponsorship opportunities, go www.MiFofilm.com or call (305) 751 - 6305. The MiFo L GBT Film Festival is committed to its mission: To inspire, entertain and educate the public, encourage a sense of community through international and culturally diverse film, video, and other media that offer historical and contemporary perspectives on the gay, lesbian, bisexual, and transgender experience . Media Contact: Sharon Kersten, Kersten Communications 954.314.7288 / kerstenPR@att.net

!. October 5-15, 2017. Information Packet with proposed . schedule of events*. #. SPIFFest. SPIFFest.org. *Subject to change due to availability of talent and venues. SPIFFest . is an annual event occurring in San Pedro, California where the entertainment and digital tech industries are front and center for the thousands of people who attend this Los Angeles based event. Known for attracting a diverse demographic,.

The Story of the Original Film Makers

is an artist and filmmaker interested in understanding the phenomena of the natural world through the cinematic experience. Tuni received an MFA in filmmaking from the California Institute of the Ar

INFLUENCED: YES OR NO?

The influence of:. France. Italy . Holland . Influences In cinema. FRANCE. Love scene in French movie . Louis de . funes. Maybe they donâ€™t have similar appearance but they both . play in comedies. ..

editor Paul Hill, this documentary was completed through a prestigious, Art & Technology post-production residency award at WEXNER CENTER FOR THE ARTS (2009-2010). ! WINNER OF THE ST. CLAIR BOURNE

a film by Sarah Watt

Science Fiction Film Festival . will be a huge successâ€¦ a success we want you to become a part of!. With our strategic partnerships, connections, . raving fan bases, and line-up of talented entertainment â€¦ .

Our role model is :

Nayla. Al-. Khaja. . Role model is :. true role models are . thoose. who posses the qualities that we would like to have and those who affected us in a way that makes us want to be better people ..

For the last five years, the film festival project

was an assignment . option for first-year seminar instructors at University of North Carolina Wilmington (UNCW). A variety of faculty . assigned . the group-based project where first-year students . created .