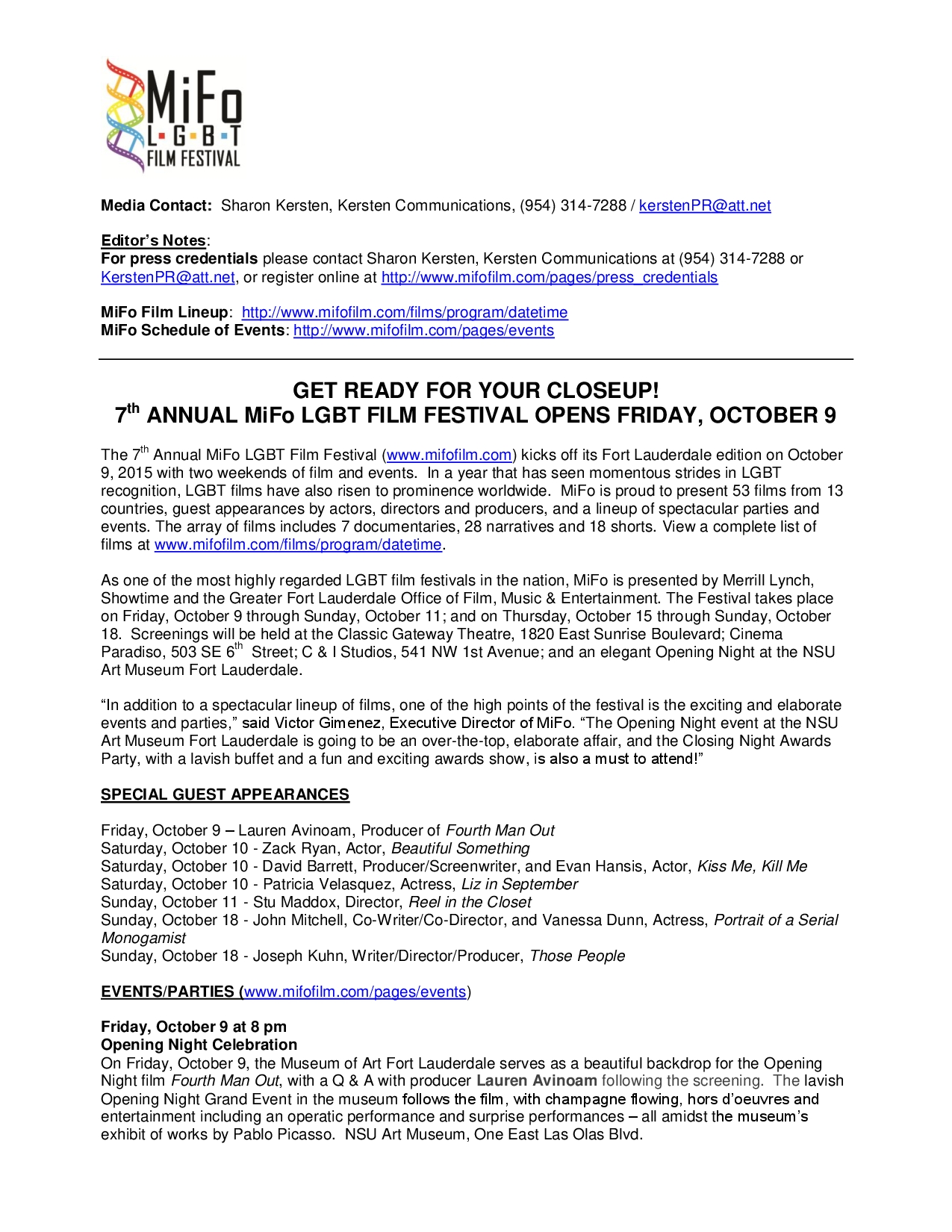 2 ith a Q & A with producer Lauren Avinoa
ith a Q & A with producer Lauren Avinoam following the screening. The lavish Opening Night Grand Event in the museum follows the film, with champagne flowing, hors d’oeuvres and entertainment including an operatic performance and surprise performances – all amidst t he museum’s exhibit of works by Pablo Picasso. NSU Art Museum, One East Las Olas Blvd. Saturday, October 10 at 9:30 pm After - Party with Actress/Author/Activist Patricia Velasquez Following the 7:30 pm screening of widely acclaimed Liz in Sep tember, join actress Patricia Velasquez at the after - party at C & I Studios. While many may recognize Patricia from The L Word or her appearance on Celebrity Apprentice, her international success runs the gamut. A social activist, she founded a foundation to help Latin American indigenous groups, and as an Artist for Peace she is a celebrity advocate for UNESCO and received the “Women Together” award at the United Nations in 2009 and the Solidarity Award in November 2010. Most recently, Patricia released h er autobiography, “Straight Walk: A Supermodel’s Journey to Finding her Truth,” in which she recounts her triumphant journey from poverty to international acclaim. Award - winning DJ Citizen Jane will be spinning throughout the night. C & I Studios, 541 NW 1st Ave nue. Thursday , October 15 Disco Dinner at 5:30 pm and Centerpiece Party at 10 pm Enjoy a pre - screening dinner at 13Even, and in keeping with the vibe of the evening ’s screening of 54: The Director’s Cut , party at a disco - themed event following the film at Cinema Paradiso. 13EVEN , 2037 Wilton Drive, Wilton Manors; Cinema Paradiso, 503 SE 6 th Street. Sund ay, October 18 Closing Night Awards Party at 9:30 pm A fabul ous closing night with a 1920s theme, the Closing Night Awards Party is a fun - filled event honoring the best of the best films. Entertainment includes jazz vocalist Jahzel Dotel performing vintage tunes with a modern twist, and a special tap dance performa nce with the band. MC Kitty Meow is sure to keep the evening upbeat and fun. Bahia Mar Fort Lauderdale Beach, 801 Seabreeze Boulevard. Enjoy a fun - filled getaway while enjoying the films, parties and events! MiFo LGBT Film Festival has partnered with tw o premier hotels -- W Fort Lauderdale and Bahia Mar Fort Lauderdale Beach, a Doubletree by Hilton Hotel -- to offer you discounted rates during the festival. S imply visit www.mifofilm.com/pages/travel an d you’re on your way to a “Fort Fabulous” getaway! V isit MiFo at www.MiFofilm.com or on Facebook at www.facebook.com/mifofilmfest , or call (305) 751 - 6305. The MiFo LGBT Film Fest is committed to its mission: To inspire, entertain and educate the public, encourage a sense of community through international and culturally diverse film, video and other media that offer historical and contemporary perspectives on the lesbian, gay, bisexual and transgender experience. # # #

uranic (TRU) waste, most of which is now at the Waste Isolation Pilot Plant, a DOE disposal site in New Mexico. TRU waste consists of items normally found within an industrial setting that have tonium

Making the most of the media

How to attract Media attention

You’re a. WRITER. .. So. . What you . really want to do is:. WRITE.. Text Submission . Process. Submit your manuscript/story for review at . http://lefthandpublishers.com/contact/. If your manuscript meets our criteria and is edited & print ready, we will contact you about a publishing .