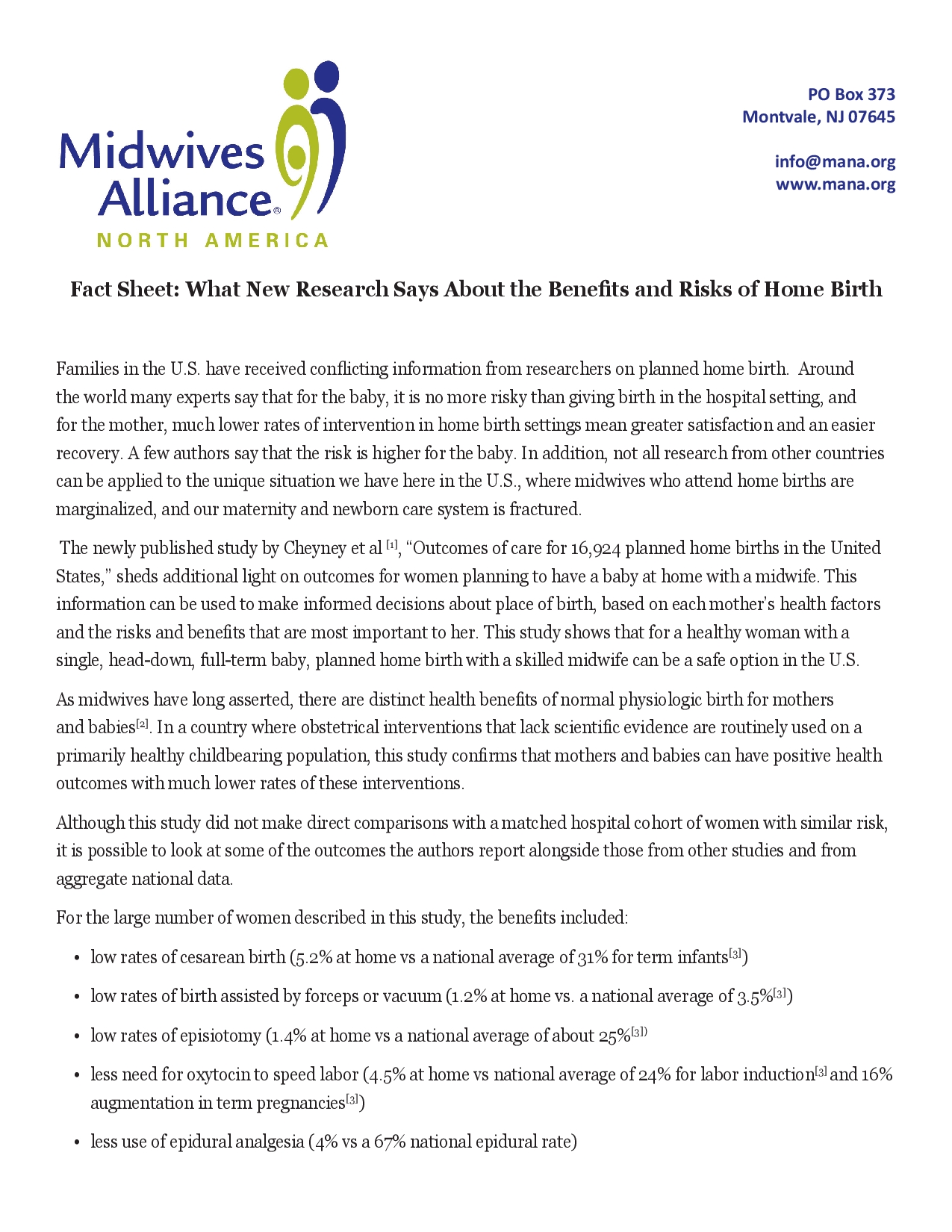 conquered the Achaemenid Empire empire he stole Persian wisdom had it

1 PO Box 373 Montvale, NJ 07645 info@mana.
PO Box 373 Montvale, NJ 07645 info@mana.org www.mana.org Fact Sheet: What New Research Says About the Bene�ts and Risks of Home Birth Families in the U.S. have received con�icting information from researchers on planned home birth. Around for the mother, much lower rates of intervention in home birth settings mean greater satisfaction and an easier recovery. A few authors say that the risk is higher for the baby. In addition, not all research from other countries can be applied to the unique situation we have here in the U.S., where midwives who attend home births are The newly published study by Cheyney et al [1] , “Outcomes of care for 16,924 planned home births in the United States,” sheds additional light on outcomes for women planning to have a baby at home with a midwife. This information can be used to make informed decisions about place of birth, based on each mother’s health factors and the risks and bene�ts that are most important to her. This study shows that for a healthy woman with a single, head-down, full-term baby, planned home birth with a skilled midwife can be a safe option in the U.S. As midwives have long asserted, there are distinct health bene�ts of normal physiologic birth for mothers primarily healthy childbearing population, this study con�rms that mothers and babies can have positive health outcomes with much lower rates of these interventions. Although this study did not make direct comparisons with a matched hospital cohort of women with similar risk, it is possible to look at some of the outcomes the authors report alongside those from other studies and from aggregate national data. For the large number of women described in this study, the bene�ts included: low rates of cesarean birth (5.2% at home vs a national average of 31% for term infants low rates of birth assisted by forceps or vacuum (1.2% at home vs. a national average of 3.5% ) low rates of episiotomy (1.4% at home vs a national average of about 25% augmentation in term pregnancies ) less use of epidural analgesia (4% vs a 67% national epidural rate) Among these women who planned a home birth with a midwife, their babies were at very low risk for: being born prematurely (2.5%) having a low 5-minute Apgar score (1.5%) requiring a transfer to a hos

2 pital after being born at home (1%) not
pital after being born at home (1%) not being breastfed (0.4%) When planning a home birth with a midwife, some unique issues may have to be considered: Moving from home to hospital while in labor. Most transfers occur because labor has stalled. It is rarely an emergency. In this study, 23% of �rst-time mothers transferred to the hospital in labor, while in subsequent pregnancies only 7.5% of mothers made the move, for a total transfer rate in labor of 10.9%. Transfers after the birth were rare. Postpartum hemorrhage. Because many labors in a hospital setting include induction or augmentation with pitocin, or providers are routinely giving a shot of pitocin to every mother with the birth of the baby, there is little research on the rates of postpartum hemorrhage when labor and birth do not include these interventions. Postpartum hemorrhage appeared to be more common in this study (15%) than rates from national studies (1-4%). However, only about half of these required intervention with Pitocin or other medications, and very few (about 1%) transferred to the hospital for this reason. In planning a birth in any location, some situations may carry a higher risk to the baby: Breech . There were 222 breech births in this study, which is not large enough to support solid conclusions about risk in the home setting. Most U.S. hospitals will not allow a breech baby to be born vaginally today; they are routinely delivered by cesarean. For mothers and families who want a vaginal breech birth, their only option may be to do it at home with an experienced midwife. However, in this study, �ve of the 222 babies born in a breech position died during labor. This suggests that breech babies were at 12 times higher risk of death during labor than babies born in a head-down position. Twins . There were only 120 births of multiples (60 sets of twins) in this study, which is a very small group, again not large enough to draw conclusions about risk. In births in which there is only one baby, there are normally about one to two deaths in a thousand (regardless of location, home or hospital). In this group of 120 births of multiples, there was one death. The outcomes of many more sets of multiples would need to be analyzed in order to know whether this constitutes a true elevated risk or statistical chanc

3 e. Prior cesarean birth . There were 105
e. Prior cesarean birth . There were 1052 mothers in this study with a prior cesarean delivery. Most of them spital VBAC rates. There are many hospitals across the U.S. -- indeed, entire regions -- in which vaginal birth after cesarean is not allowed. For mothers and families who want a VBAC, their only option may be to do it at home with an experienced midwife. This study indicates that the success rates are very high when birth is planned at home with a midwife, but the potential risks to the baby are as yet unknown. In this group of 1052 births, three babies died in labor. No solid conclusions can be drawn here, largely because the sample size was too small; more high quality research is needed. . Certain health factors, such as preeclampsia or uncontrolled gestational diabetes, or simply a healthy mother having her �rst baby, carry a higher risk for the baby, no matter where the birth takes place; this has been well-established in decades of research. It is not possible to know from this study whether the fetal losses that occurred in labor to �rst-time mothers or the few with preeclampsia or gestational diabetes were because of the health factors themselves or because of the planned birth location. Each one of these factors could generate an in-depth study in itself and requires more analysis to truly understand the effects of combinations of factors. We look forward to more research on these issues from MANA Stats. In this study, the risk of death to the baby was calculated in two ways, outlined below. As mentioned, this study was not able to make direct comparisons with a matched hospital cohort of women with similar risk, but some of these outcomes may be examined alongside national data for women with full-term pregnancies (37-41 weeks) from the latest year available (2010), as well as other well-designed studies on planned home birth. Deaths that occurred in the entire sample, regardless of risk factors . When all deaths in this sample were examined (excluding babies with lethal congenital anomalies, but including the higher-risk factors listed in the section above), the rates of death were as follows: 1.3 babies per 1000 planned home births died in labor (intrapartum); similar to Johnson & Daviss and Kennare et al ; national data not available for comparison 0.41 bab

4 ies per 1000 live births died in the &#x
ies per 1000 live births died in the �rst week of life (early neonatal); similar to de Jonge et al , Birthplace in England Collaborative ; national data for term births in 2010 compares at 0.46/1000 0.35 babies per 1000 live births died between 7 and 28 days of life (late neonatal); national data for term births in 2010 compares at 0.33/1000 ; total neonatal death rate (early plus late) of 0.76/1000 is similar to Hutton et al While these neonatal death rates are similar to most other well-designed studies and overall national statistics for term births, the intrapartum rate is slightly higher. The authors hypothesized that this may be due to the fact that there are some higher-risk pregnancies and births in this sample, as outlined in the section above, that are not included in some other home birth studies. Deathslow-riskthatsimilarlytheriskpro�les mothers in other well-designed studies. When the data were examined for the low-risk pregnancies, excluding records involving breech deliveries, twins, and mothers with prior cesareans, gestational diabetes and preeclampsia, the rates of death were as follows: 0.85 babies per 1000 planned home births died in labor; similar to Hutton et al and Stapleton et al the neonatal death rates were unchanged It is on this basis that the researchers were able to conclude that for mothers with low-risk pregnancies, there is no increased risk to the baby. Where More Research Is Needed What place of birth (home, birth center or hospital) is most likely to lead to the best possible health for mothers and babies, given each mother’s speci�c risk pro�le and the birth options that are available to her? What are the characteristics of midwife-led care that contribute to safe birth outcomes? What benchmarks contribute to optimal birth outcomes when principles of normal physiologic birth are utilized? Regardless of where a woman chooses to give birth, how can providers most effectively collaborate across birth settings and provider types to achieve the best possible outcomes for mothers and babies? This value of this study is that it contributes to the growing body of literature on planned home birth in the United States. It can be a useful tool for midwives, families, other maternity care providers and policy makers. It can be especial