Other projects between SaudiArabia and the United States are financed 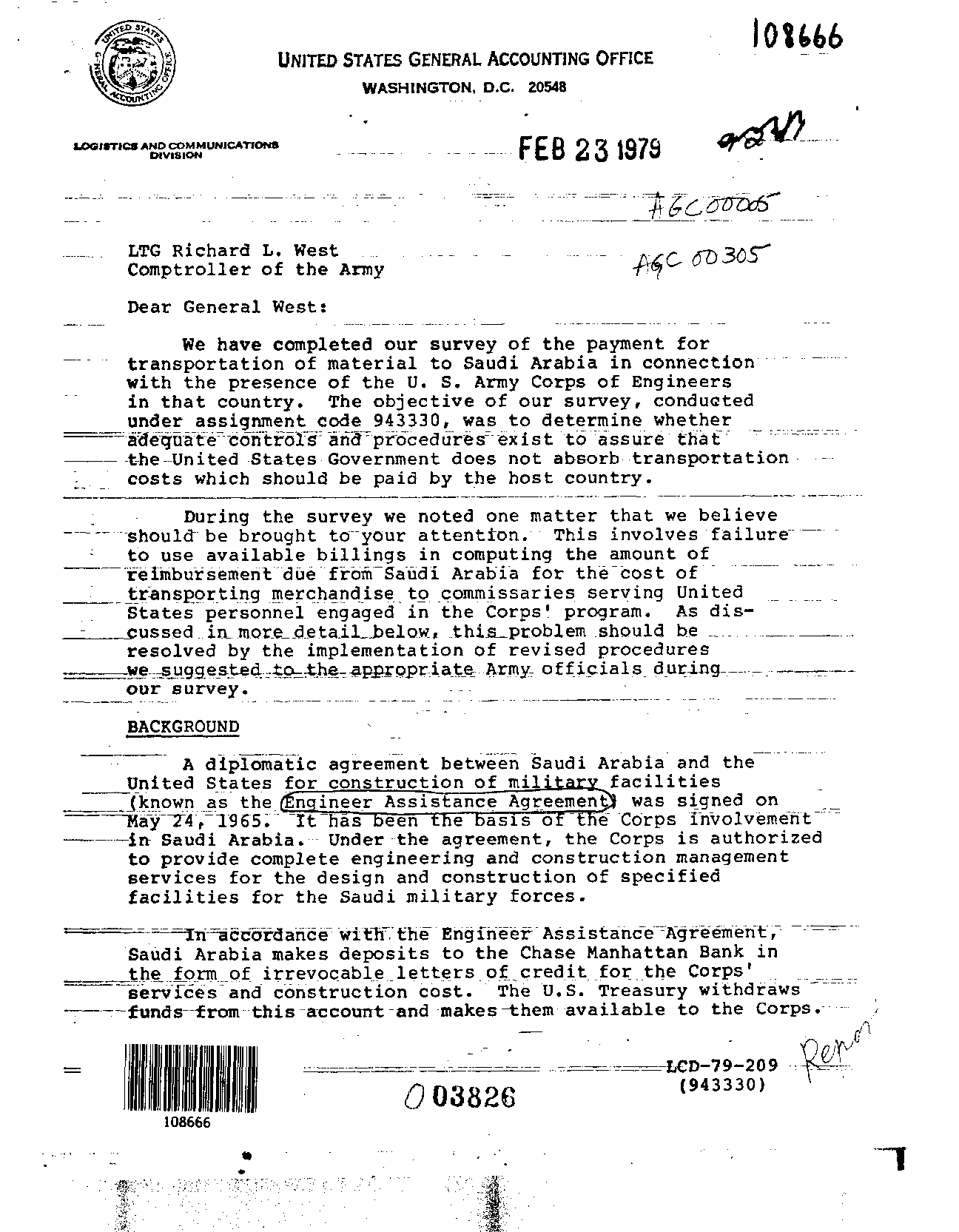 Other projects between SaudiArabia and the United States are financed - Description

Presentation on theme: "Other projects between SaudiArabia and the United States are financed"— Presentation transcript

1 Other projects between Saudi'Arabia and
Other projects between Saudi'Arabia and the United States are financed in accordance with Foreign Military Sales (FMS) financial'procedures of the (MSC) for shipments of cargo which are made on reimbursable basis. The trans- portation costs for these reimbursable shipments are readily identified through use of specific transportation account codes (A215 and MSC handle the shipment of mail &d"commissary items for all U.S. *.e. L -. SURVEY RESULTS - Based on our test examination of shipments, we found that most of the transportation costs for shipments to Saudi Arabia either had paid for by that country or action had initiated to obtain reimbursement from Saudi Arabian funds. 2 Gur tests showed that the Corps generally reimbursed the Army for transportation costs of shipments of cargo carried by MAC and MSC on reimbursable basis. USAFAC received billings ,from MAC and MSC which and bill the Corps for the amounts due. The payment vouchers then cited the Saudi Arabian funds which were used to make the proper reimbursements. - Commissary shi

2 pments are mad: by the Defense Personnel
pments are mad: by the Defense Personnel Support Center (DPSC), Philadelphia, Pa., and are transported by MAC and MSC. DPSC is billed by MAC and MSC for have been charged to general transportation account codes. The use of these codes does not permit separate identification of transportation costs for shipments of commissary items to Saudi Arabia which are properly chargeable to the :. Army Operations and Maintenance Appropriation and those Yz‘fransportation costs which are paid by the Army with Lz-subsequent reimbursement.to be made-by Saudi Arabia. mm. - _ .-. -_._ ---. We found that DSAA and USAFAC had taken actions made by -MAC and MSC during the-period July 1, 1976,-through 2: June 30, 1977. However, DSAA used estimated tonnages and f--costs of shipments to determine the transportation costs "'that the Army billed to-Saudi Arabia rather than using * 1 the MAC Arabia ~-t-er-J_uly. 1 I 1977, DSAA furnished USAFAC with data also based on estimated costs. The amounts were $3,155,545 and $3,635,469 for the periods July 1, 1977, to Jun

3 e 5, 1978, and -'-June Saudi Arabia ef
e 5, 1978, and -'-June Saudi Arabia effective ;'.-as Of'July 1;1977. _.__. _ ,. - . - _ - _ =y-. - .We analyzed MSC billings forthe period[June 1977 ---through June 1978 tonnage shipped MAC for the period September 1977 through July 1978. We estimate, based on our analysis, that the transportation costs for the shipment of commissary items to Saudi Arabia were more than million annually. DSAA statistics indicate that approxi- mately 64 percent of the commissary patrons in Saudi Arabia are 3 . 1 assigned to the Army Engineers construction projects. Based 1 this ratio, the'Army should be reimbursed about $3 million annually by survey, we discussed a suggestion to identify correct amounts from available billings and to prorate the charges for the transportation costs of shipments of commissary'items with responsible officials to identify and bill the Saudi Arabian Government for its appropriate allocable share of the transportation costs based on billings to the Engineers in Saudi Arabia. Since the responsible agencies are aware of and ha

Download - The PPT/PDF document "Other projects between SaudiArabia and the United States are financed" is the property of its rightful owner. Permission is granted to download and print the materials on this web site for personal, non-commercial use only, and to display it on your personal computer provided you do not modify the materials and that you retain all copyright notices contained in the materials. By downloading content from our website, you accept the terms of this agreement.

EXACTLY HOW DEPENDANT IS THE UNITED STATES ON FOREIGN OIL? - PDF Slides