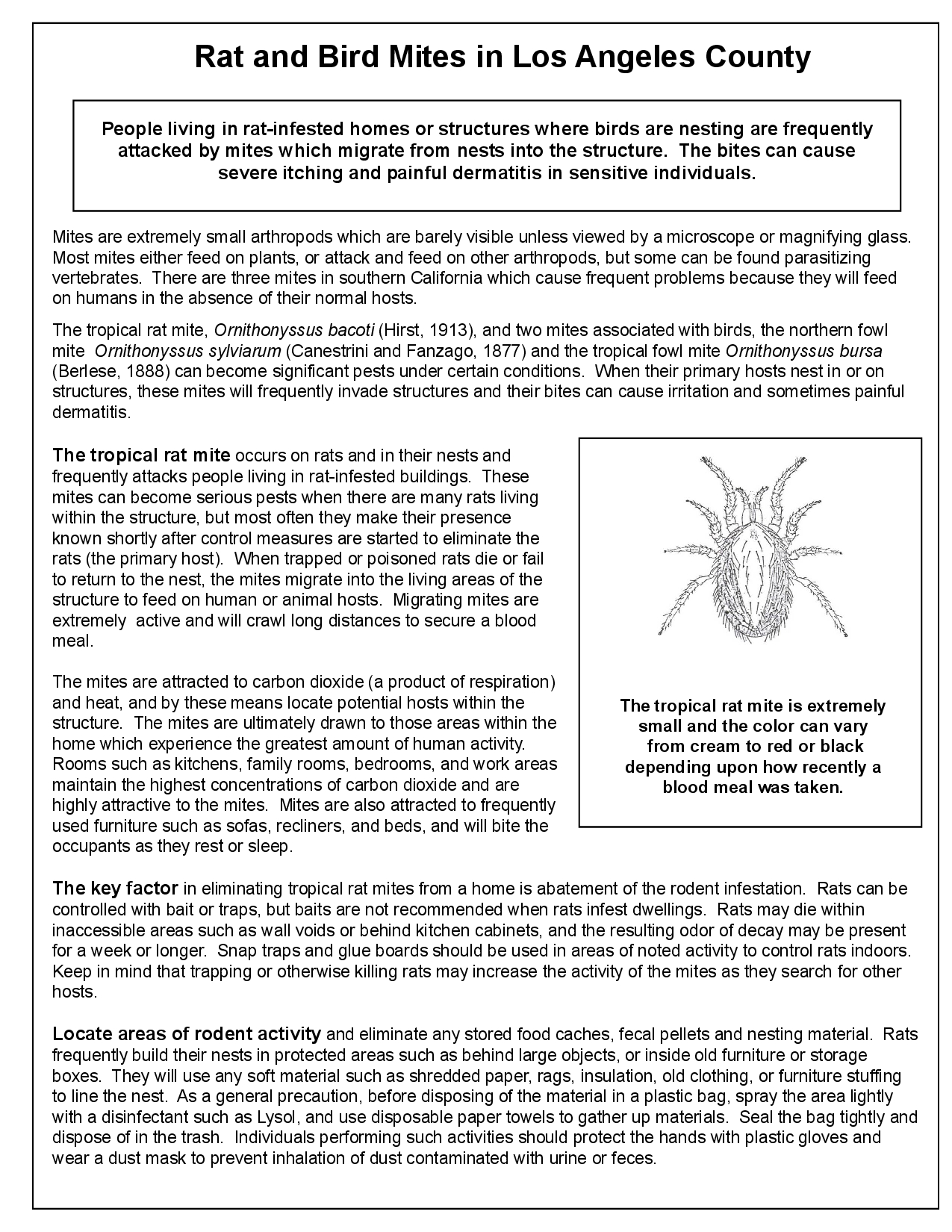 People living in ratinfested homes or structures where birds are nest

The Homes At Deer Mountain

Document on Subject : "People living in ratinfested homes or structures where birds are nest"— Transcript:

1 People living in rat-infested homes or s
People living in rat-infested homes or structures where birds are nesting are frequentlyattacked by mites which migrate from nests into the structure. The bites can causesevere itching and painful dermatitis in sensitive individuals. Rat and Bird Mites in Los Angeles CountyMites are extremely small arthropods which are barely visible unless viewed by a microscope or magnifying glass.Most mites either feed on plants, or attack and feed on other arthropods, but some can be found parasitizingvertebrates. There are three mites in southern California which cause frequent problems because they will feedon humans in the absence of their normal hosts.(Hirst, 1913), and two mites associated with birds, the northern fowl (Canestrini and Fanzago, 1877) and the tropical fowl mite (Berlese, 1888) can become significant pests under certain conditions. When their primary hosts nest in or onstructures, these mites will frequently invade structures and their bites can cause irritation and sometimes painful occurs on rats and in their nests andfrequently attacks people living in rat-infested buildings. Thesemites can become serious pests when there are many rats livingwithin the structure, but most often they make their presenceknown shortly after control measures are started to eliminate therats (the primary host). When trapped or poisoned rats die or failstructure to feed on human or animal hosts. Migrating mites areextremely active and will crawl long distances to secure a bloodThe mites are attracted to carbon dioxide (a product of respiration)and heat, and by these means locate potential hosts within thestructure. The mites are ultimately drawn to those areas within thehome which experience the greatest a

2 mount of human activity.Rooms such as ki
mount of human activity.Rooms such as kitchens, family rooms, bedrooms, and work areasmaintain the highest concentrations of carbon dioxide and arehighly attractive to the mites. Mites are also attracted to frequentlyused furniture such as sofas, recliners, and beds, and will bite theoccupants as they rest or sleep.The key factorin eliminating tropical rat mites from a home is abatement of the rodent infestation. Rats can becontrolled with bait or traps, but baits are not recommended when rats infest dwellings. Rats may die withininaccessible areas such as wall voids or behind kitchen cabinets, and the resulting odor of decay may be presentfor a week or longer. Snap traps and glue boards should be used in areas of noted activity to control rats indoors.Keep in mind that trapping or otherwise killing rats may increase the activity of the mites as they search for otherand eliminate any stored food caches, fecal pellets and nesting material. Ratsfrequently build their nests in protected areas such as behind large objects, or inside old furniture or storageboxes. They will use any soft material such as shredded paper, rags, insulation, old clothing, or furniture stuffingto line the nest. As a general precaution, before disposing of the material in a plastic bag, spray the area lightlywith a disinfectant such as Lysol, and use disposable paper towels to gather up materials. Seal the bag tightly anddispose of in the trash. Individuals performing such activities should protect the hands with plastic gloves andwear a dust mask to prevent inhalation of dust contaminated with urine or feces. The tropical rat mite is extremelysmall and the color can varydepending upon how recently ablood meal was taken

People living in ratinfested homes or structures where birds are nest

Majestic Birds of Prey. Birds of prey are all flesh eaters. All take live prey except for the vulture, which lives on carrion (dead decaying flesh). They all have a curved, sharp, strong bill for tearing flesh, and feet with strong curved talons. Each bird is representative of a different family except the two eagles..

Birds of Florida and Birds of Mountain States

Bird Stations Beaks A cone shaped bill is found in many birds such as finches and grosbeaks. It is

Thin, slender, pointed beaks are found mainly in insect eaters. They are used to pick insects off leaves, twigs, and bark. This warbler is a good example.. Woodpeckers have strong beaks which taper to the tip, forming a chisel for pecking holes in trees for food or nests. Most feed on insects which live under the bark..

Take out your agenda book, . science notebook . and something to write with.. Take out your homework (CER WORKSHEET). Sit down quietly and wait for directions. HOMEWORK. No homework tonight!!. Quiz Wednesday.

A Busy Month SHINI A JOHN PRT KV ADOOR SHIFT 1 POINTS TO REMEMBER Most birds make nest in the beginning of the summer season. They make nests on trees , between stones ,behind shells ,on leaves etc.

Beautiful picture of how God deals with His people

Transitioning to Living on Your Own

Chapter 26 Reptiles and Birds Reptiles Skin is smooth and dry, covered in scales

Chapter 26 Reptiles and Birds Reptiles Skin is smooth and dry, covered in scales Helps prevent the evaporation of water from its body. First vertebrates with adaptations that enabled them to survive on land only.

These teaching slides were created by the BirdSleuth K-12 team. We welcome you to share these slides with your students! You may edit this file, but please do not distribute this file (neither original or edited versions)..

Through Fluids . Background. Features that allow a living thing to survive in its environment are called adaptations.. Adaptations may be body parts, abilities and skills, or behaviours.. Birds, bats, sharks, and dandelion seeds all have something in common..

Mites are closely related to ticks and less so spiders

As more of their habitat disappears

Wake . County. Birds . Commonly Seen Around . Your Neighborhood. American Robin. Dark gray back and a brick red breast. Song is a clear caroling of short phrases often very long in duration. Calls are a .

Watu. island. Changing climates. Imagine living with the constant danger that your home could be flooded at any time.. Our climate is changing and for many people living near riverbanks, the fear of flooding is never far from home..

Watu. island. Changing climates. Imagine living with the constant danger that your home could be flooded at any time.. Our climate is changing and for many people living near riverbanks, the fear of flooding is never far from home..