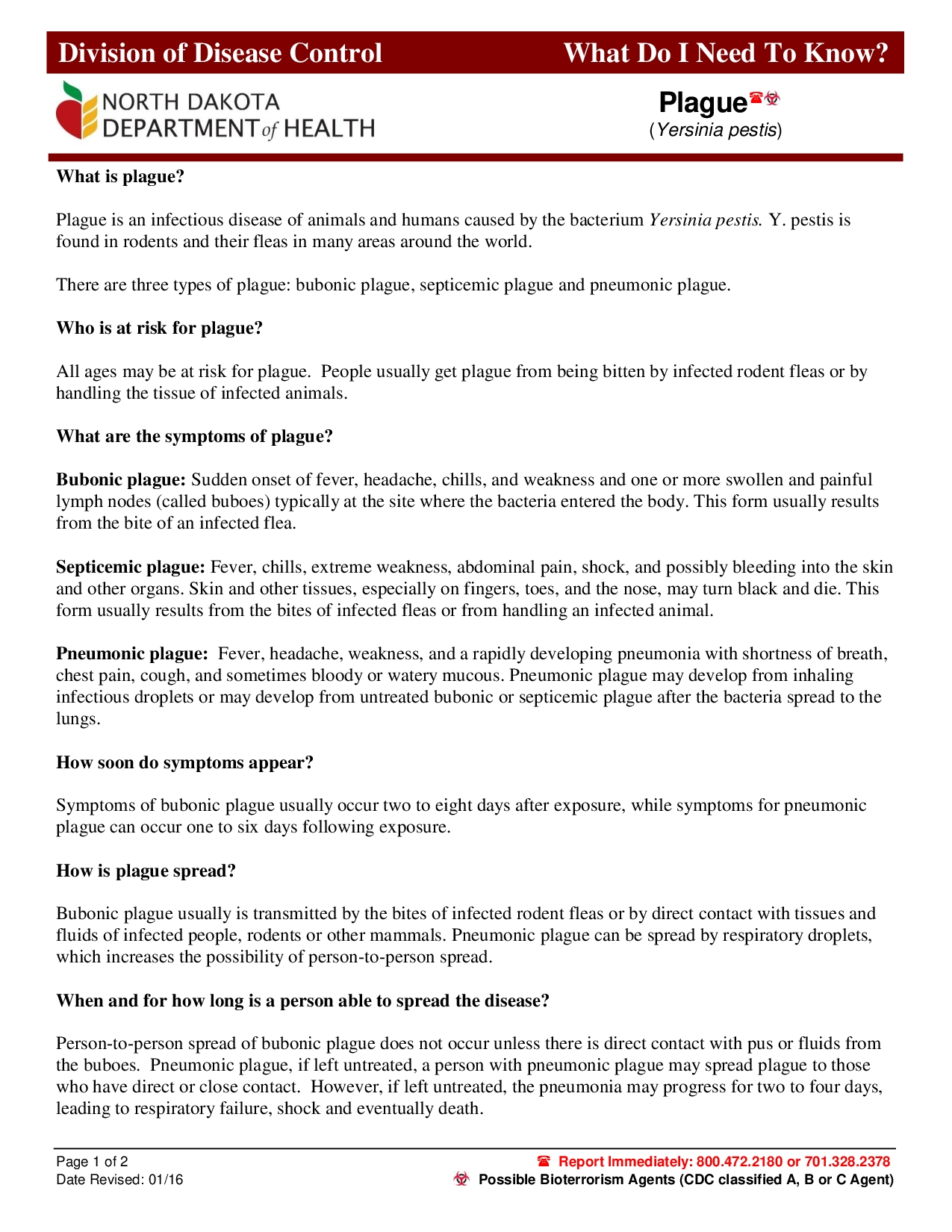 COMPARISON OF THE ANTIKICKBACK STATUTE AND STARK LAW

OF THE COOLEST THINGS TO BRAG ABOUT

1 Page 1 of 2
Page 1 of 2  Report Immediately: 800.472.2180 or 701.328.2378 Date Revised: 0 1 /1 6 Possible Bioterrorism Agents (CDC classified A, B or C Agent) Plague  ( Yersinia pestis ) What is p lague ? Plague is an infectious disease of animals and humans caused by the bacterium Yersinia pestis. Y. pestis is found in rodents and their fleas in many areas around the world. There are three t ypes of plague : bubonic plague , septicemic plague and pneumonic plague. Who is at risk for p lague ? A ll ages may be at risk for plague. People usually get plague from being bitten by infected rodent fleas or by handling the tissue of infected animal s . What are the symptoms of p lague ? Bubonic plague: S udden onset of fever, headache, chills, and we akness and one or more swollen and painful lymph nodes (called buboes) typically at the site where the bacteria entered the body . This form usually results from the bite of an infected flea. Septicemic plague: F ever, chills, extreme weakness, abdominal pain, shock, and possibly bleeding into the skin and other organs. Skin and other tissues , especially on fingers, toes, and the nose , may turn black and die. This form usually results from the bites of infected fle as or from handling an infected animal. Pneumonic plague: F ever, headache, weakness, and a rapidly developing pneumonia with shortness of breath, chest pain, cough, and sometimes bloody or watery mucous. Pneumonic plague may develop from inhaling infecti ous droplets or may develop from untreated bubonic or septicemic plague after the bacteria spread to the lungs. How soon do symptoms appear? Symptoms of bubonic plague usually occur two to eight days after exposure , while symptoms for pneumonic plague can occur one to six days following exposure . How is p lague spread? Bubonic plague usually is transmitted by the bites of infected rodent fleas or by direct contact with tissues and fluids of infected people, rodents or other mammals. P neumonic plague can be spread by respiratory droplet s , which increases the possibility of person - to - person spread . When and for how long is a person able to spread the disease? P erson - to - person spread of bubonic plague does not occur unless there is direct contact with pus or fluids from the buboes. Pneumonic plague, if left untreated, a person with pneumonic plague may spread plague to those who have direct or close contact. However, if left untreated, the pneumonia may pr ogress for two to four days, leading to respiratory failure, shock and eventually death . Division of Disease Control What D o I Need T o Know? Page 2 of 2 

2 Report Immediately: 800.472.2180 or 7
Report Immediately: 800.472.2180 or 701.328.2378 Date Revised: 0 1 /1 6 Possible Bioterrorism Agents (CDC classified A, B or C Agent) How is a person diagnosed? Diagnosis is made by taking samples from the patient, especially blood or part of a swollen lymph gland, and submitting them for laborator y testing. What is the treatment? P lague respond s well to early treatment with antibiotics. Contact your health - care provider if you think you have symptoms of plague. Treatment for plague should begin as soon as possible. Does past infection make a person immune? Immunity will be short term and may not protect against future exposures to plague . Should children or others be excluded from child care, school, work or other activities if they have plague? No for bubonic, yes for pneumonic . Adults and children with bubonic plague should cover their wound site as a general precaution . People with pneumonic plague, should be isolated to prevent airborne spread until 48 hours of appropriate therapy has been completed and there has been a favorable cli nical response. People who have had close contact with someone who had pneumonic plague should be seen by a physician to determine the need for antibiotic s and should be on symptom watch for fever and cough. What can be done to prevent the spread of Plague ? Additional precaution measures include:  Do not pick up or touch dead animals.  If plague has recently been found in your area, report any observations of sick or dead animals to the state/ local health department , Game and Fish Department or law enforcement officials.  Eliminate sources of food and nesting places for rodents around homes, work places, and recreation areas; and remove brush, rock piles, junk, cluttered firewood, and potential food supplies, such as pet and wild animal food. Make your home rodent - proof.  Apply insect repellents to clothing and skin according to label instructions to prevent flea bites.  T reat your dogs and cats for flea s regularly and do not allow these animals to roam freely. Additional I nformation : Additional information i s available by calling the North Dakota Department of Health at 800.472.2180. This disease is a reportable condition. As mandated by North Dakota law, any incidence of this disease shall be reported to the North Dakota Department o f Health. Re source s : 1. Red Book: 2015 Report of the Committee on Infectious Diseases. 30 th ed. [Children in Out - Of - Home Care]. Kimberlin, DW; Brady, MT; Jackson, MA; Long, SS. American Academy of Pediatrics. 2015: 132 - 151. 2. Red Book: 2015 Report of the Committee on Infectious Diseases. 30 th ed. [Plague]. Kimberlin, DW; Brady, MT; Jackson, MA; Long, SS. American Academy of Pediatrics. 2015: 624 - 626 . 3. Heymann, D. L. (2015). Control of Communicable Diseases Manual, 20 th Edition . Plague . American Public Heal th Association. 2015: 456 - 465 . 4. Centers for Disease Control and Prevention. (2013). Plague. www.cdc.gov/plague/ .

Immediately, or as soon as possible, make and/or to a Police or Sheriff

ON THE JOB INJURY PROCEDURE. AND RETURN TO WORK PROGRAM. SAFETY. It’s as . simple as ABC. …. Always Be Careful. We are committed to the health and safety of our employees.. A safe working environment.

When to pay? Consumer decisions about immediate vs future losses

Crossing the Sea by Foot. Mark 6:45-56. 6:45 Immediately He made His disciples get into the boat and go ahead of Him to the other side, to Bethsaida, while He dismissed the crowd.. 46 After He said good-bye to them, He went away to the mountain to pray..

adjectives and adverbs #4. In a sentence with a compound subject, verb, or object, a modifier may describe one part of the compound element or all parts. What . the modifier describes affects where it is placed..

9:15-27. “Immediately, when they saw Him, all the people were greatly amazed, and running to Him, greeted Him. And He asked the scribes, “What are you discussing with them?’ Then one of the crowd answered and said, ‘Teacher, I brought You my son, who has a mute spirit. And wherever it seizes him, it throws him down; he foams at the mouth, gnashes his teeth, and becomes rigid. So I spoke to Your disciples, that they should cast it out, but they could not’…”.

Cuyno. , Joanna Marie. Torno. , . Mylene. III- BSCT. Background. . During the last two centuries, Tl. 2. SO. 4. had been used for various medical treatments but was abandoned. In the later 1900s it found use mainly for rodenticides.

Plans. Details what actions to take in an emergency.. Will assign emergency specific responsibilities. . Lists all foreseeable hazards and how to respond.. Details evacuation procedures.. Is required by law!.

Refrigerate leftovers immediately! Do not allow them tocool first on the kitchen counter! Leftovers shouldn

him. He immediately ran

4) at 5) away in terror, but several days later he found the courage to return and cut the mammoth

 years ago but not immediately after.Walter wondered for the clay layer Were the high iridium levels only