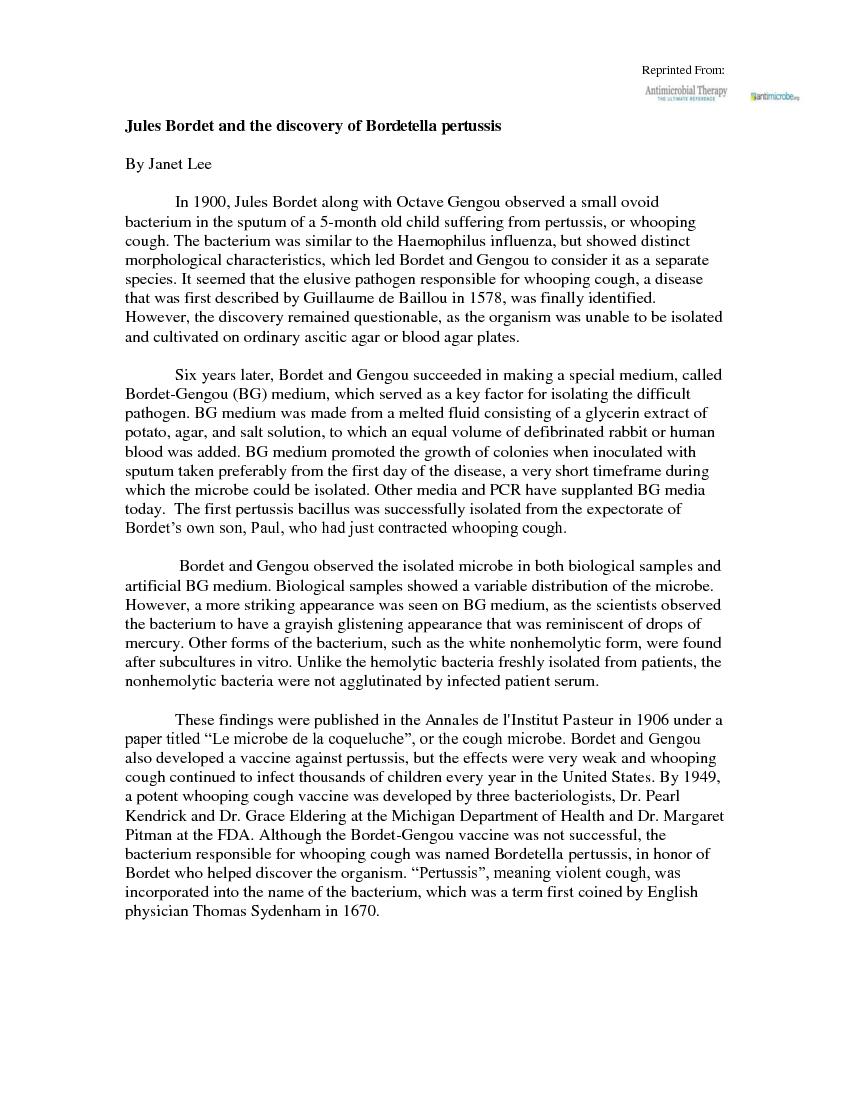 A Workers146 Compensation Joint Powers Authority for the Public School

LED Drivers are an emerging replacement market opportunity for distrib

Document on Subject : "Reprinted From:"— Transcript:

1 Reprinted From: Jules Bordet and t
Reprinted From: Jules Bordet and the discovery of Bordetella pertussis B y Janet Lee In 1900, Jules Bordet along with Octave Gengou observed a small ovoid bacterium in the sputum of a 5 - month old child suffering from pertussis, or whooping cough. The bacterium was simil ar to the Haemophilus influenza, but showed distinct morphological characteristics, which led Bordet and Gengou to consider it as a separate species. It seemed that the elusive pathogen responsible for whooping cough, a disease that was first described by Guillaume de Baillou in 1578, was finally identified. However, the discovery remained questionable, as the organism was unable to be isolated and cultivated on ordinary ascitic agar or blood agar plates. Six years later, Bordet and Gengou succeeded in making a special medium, called Bordet - Gengou (BG) medium, which served as a key factor for isolating the difficult pathogen. BG medium was made from a melted fluid consisting of a glycerin extract of potato, agar, and salt solution, to which an equal volu me of defibrinated rabbit or human blood was added. BG medium promoted the growth of colonies when inoculated with sputum taken preferably from the first day of the disease, a very short timeframe during which the microbe could be isolated. Other media and PCR have supplanted BG media today. The first pertussis bacillus was successfully isolated from the expectorate of Bordet’s own son, Paul, who had just contracted whooping cough. Bordet and Gengou observed the isolated microbe in both biological samp les and artificial BG medium. Biological samples showed a variable distribution of the microbe. However, a more striking appearance was seen on BG medium, as the scientists observed the bacterium to have a grayish glistening appearance that was remin

2 iscent of drops of mercury. Other for
iscent of drops of mercury. Other forms of the bacterium, such as the white nonhemolytic form, were found after subcultures in vitro. Unlike the hemolytic bacteria freshly isolated from patients, the nonhemolytic bacteria were not agglutinated by infected patien t serum. These findings were published in the Annales de l'Institut Pasteur in 1906 under a paper titled “Le microbe de la coqueluche”, or the cough microbe. Bordet and Gengou also developed a vaccine against pertussis, but the effects were very weak an d whooping cough continued to infect thousands of children every year in the United States. By 1949, a potent whooping cough vaccine was developed by three bacteriologists, Dr. Pearl Kendrick and Dr. Grace Eldering at the Michigan Department of Health and Dr. Margaret Pitman at the FDA . Although the Bordet - Gengou vaccine was not successful, the bacterium responsible for whooping cough was named Bordetella pertussis , in honor of Bordet who helped discover the organism. “Pertussis”, meaning violent cough, was incorporated into the name of the bacterium, which was a term first coined by English physician Thomas Sydenham in 1670. Bordetella pertussis on Bordet - Gengou medium Source: http://cid.oxfordjournals.org/content/49/10/1565/F1.expansion.html Referen ces http://jrd.consultantlive.com/display/article/1145425/1404732 http://books.google.com/books?id=vJKQRdJHUooC&pg=PA535&lpg=PA535&dq=bord et+discovery+pertussis&source=bl&ots=8iqAfeZJpi&sig=4ePZ7gxevRtA2tQZqFWmfm o1jUo&hl=en&ei=2_SVTqj2NqL00gGk6ozBBw&sa=X &oi=book_result&ct=result&res num=5&ved=0CDcQ6AEwBDgK#v=onepage&q=bordet%20discovery%20pertussis&f= false pg. 535 - 538 http://www.discoveriesinmedicine.com/Com - En/DPT - Vaccine.html http://cid.oxfordjournals.org/content/49/10/1565.full

Re-Imagining our Economic System. MSU CCED Institute March 26, 2013. Biophysical Economics: . The Science Behind Economic Growth. Photo credit:. WHAT . IS REAL ECONOMIC WEALTH. ?. Money . can be printed, and created with the stroke of a .

Copyright 2006 Bloomberg L.P. Reprinted with permission. Identify your forward-looking statements as such. If you are not currently covered by the safe-harbor, make sure that you do not identify state

Images reprinted with permission of author.