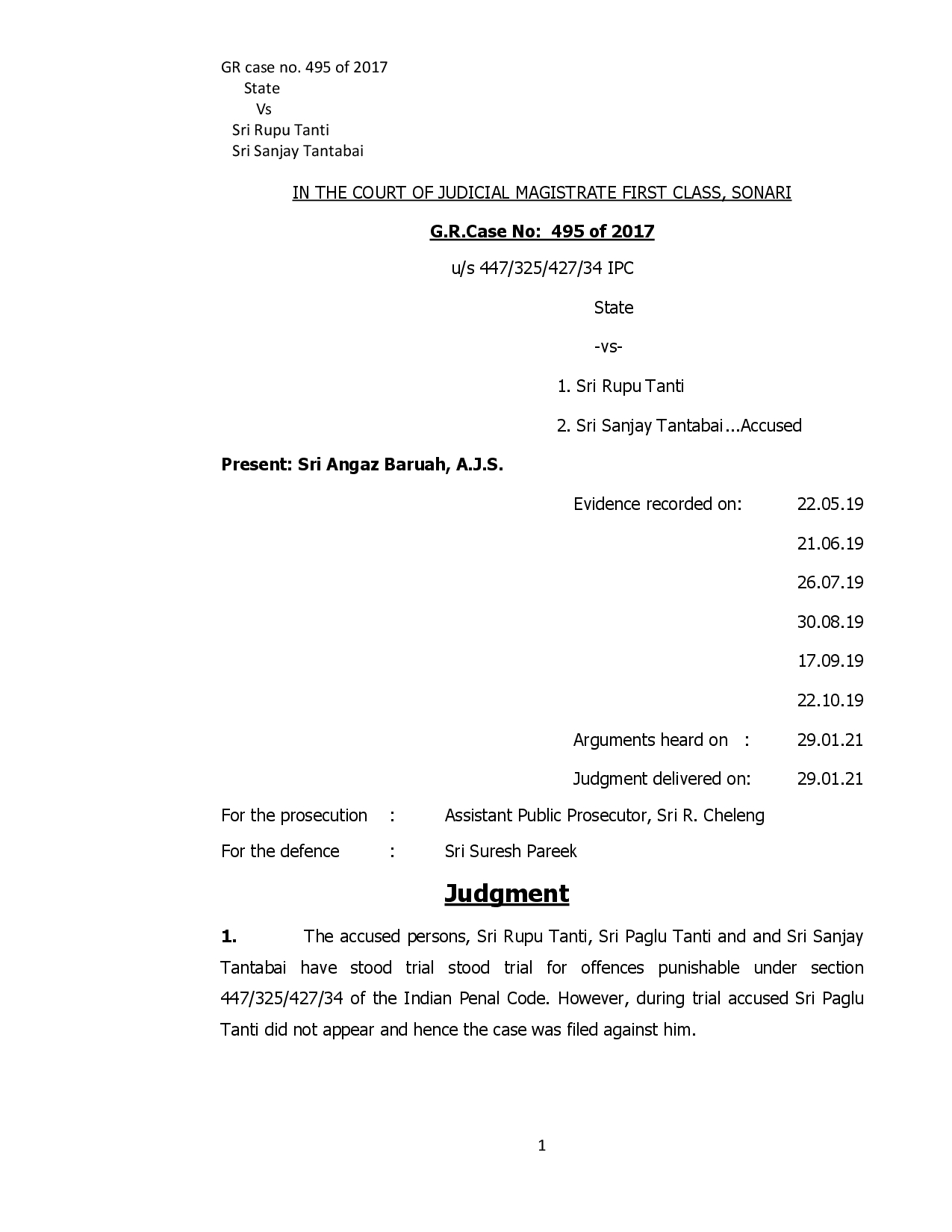 4 boo stick. 12. PW - 3 Sri Shankar Ma
boo stick. 12. PW - 3 Sri Shankar Maut stated that on the day of the incident both the informant and the accused were engaged in a brawl. 13. PW - 5 Dr. Pall ab Gogoi stated that on 21.08.2017 , he examined Bimal Bakti who came with alleged history of assault and found abrasion over his back, knees, forehead and lower lip . He could not opine because the victim was referred to AMCH, Dibrugarh. He has identified E x t - 2 as the Medical report . GR case no. 495 of 2017 State Vs Sri Rupu Tanti Sri Sanjay Tantabai 4 14. PW - 6 Sri Baidyanath Konwar stated that on 21.08.2017 , the informant lodged an ejahar and he was entrusted with investigation. He interrogated the informant and visited the place of occurrence. He prepared a sketch map which is E xt - 3 . He interrogated other witnesses having knowledge of the incident. He collected the medical report. When the accused persons arrived at the police station, he arrested them and later released them on bail. Finding sufficient materials against the accu sed persons h e submitted the charge sheet against the accused persons U/s 447/325 / 427 /34 , IPC. Rebuttal by Defence: 15. The defence has denied all the allegations leveled against the accused persons. While the defence has also adduced evidence in this regard, it has also relied on the cross - examination of the prosecution witnesses to demolish their credibility. 16. In t

6 derives some benefit from the result of
derives some benefit from the result of a litigation; in the decree in a civil case, or in seeing an accused person punished. A witness who is a natural one and is the only possible eyewitness in the circumstances of a case cannot be said to be "interested". 22. Considering the history between both parties, i.e. considering that the informant and the accused were not in good terms, the rule of prudence pro mpts this court to seek out corroboration of the prosecution’s case from independent quarters. After all, considering the time and place of the alleged occurrence, it would not have been unreasonable to expect the presence of independent witnesses there. T hat would be the more cautious app roach towards the instant case. That apart, the incident happened in the courtyard of the house of PW - 1. So evidence of the people of the locality could have been led of the alleged offence. In offences involving bad blood between two families, it would have been prudent to bring witnesses from independent quarters. The other witnesses did not lend any support to the prosecution case. 23. It is pertinent to add here that the prosecution’s already weak case falters in another re gard. To constitute an offence of voluntarily causing hurt, ocular GR case no. 495 of 2017 State Vs Sri Rupu Tanti Sri Sanjay Tantabai 6 evidence and medical report should be conclusive that the accused per sons actually ca

7 used hurt to PW - 1 . In absence of reli
used hurt to PW - 1 . In absence of reliable and clinching evidence, it becomes extremely difficult to conv ict the accused persons especially when the Medical Officer admitted that it could be caused by falling on a hard substance. 24. Section 427 of the IPC has the following ingredients: (i), Firstly, intension of the offender, (ii) secondly, the inten t ion must be for causing wrongful loss or damage to the property of others, (iii) thirdly, there must be destruction of property or diminish of its value. But nothing could be seized to substantiate the offence. Decision s 25. It does not require repetition that it is t he burden of the prosecution to establish through cogent and unimpeachable e vidence that the accused persons committed the alleged offences, f ailing which the accused persons will be deemed to be innocent. Innocent until proven guilty is a cardinal princip le of criminal jurisprudence which cannot be ignored at any cost. 26. As discussed in the preceding paragraphs, the very edifice upon which the entire prosecution story was resting has been shaky. Considering the chequered history between both parties, the la ck of corroboration, I am of the considered opinion that there is ample room for reasonable doubt in the prosecution’s case qua the accused persons. 27. Hence, considering all, the points for determination are decided in the negative. Order 28. In light of the aforesaid discussion and decisions