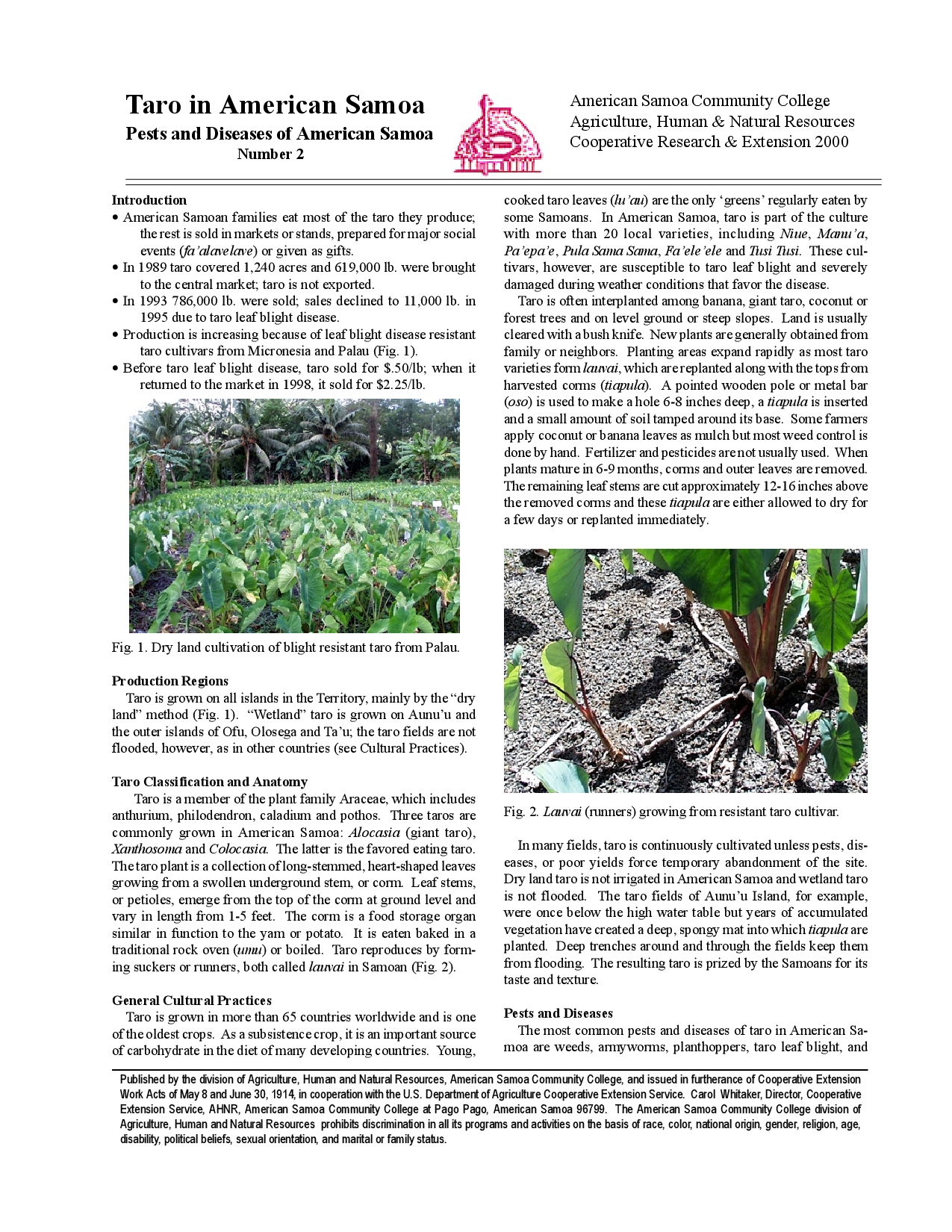 2nd World Conference and Exhibition on

DEPARTMENT OF HEALTH AND HUMAN SERVICES

1 Taro in American Samoa Work Acts of May
Taro in American Samoa Work Acts of May 8 and June 30, 1914, in cooperation with the U.S. Department of Agriculture Cooperative Extension Service. Carol Whitaker, Director, Cooperative IntroductionAmerican Samoan families eat most of the taro they produce; root and corm rot. Chemicals are not generally used against taro W eeds. The competitive ability of weeds makes them a problemin taro production. The problem, however, is greatly reduced after3-4 months when large taro leaves shade the soil. Weed speciesaffect agriculture throughout the Pacific Islands. One of the mostimportant weeds affecting taro production is purple nutsedge,Cyperus rotundus. Weed control includes hand clearing, mulch-ing and crop canopy management. The use of herbicides is in- Armyworm. Many American Samoan farmers list armyworm) as the main taro insect pest. Outbreaks aresporadic and vary in location and intenstiy. A female moth lays200-300 eggs in a cluster on a leaf; eggs hatch in 4-8 days. Larvaefeed side-by-side on the leaf (Fig. 3) and within a few days, only Fig. 3. Armyworm larvae feeding on surface of a taro leaf. T aro leaf blight. Taro leaf blight disease hit the Samoas in 1993-1994. All Samoan taro cultivars are susceptible to the fungus,(Fig. 4). Spores either germinate directly and penetrate the planttion. Of all integrated control practices, only resistant taro variet-ies have been effective in American Samoa.Cultural Control. Removing infected plant parts or whole plantsinfections. During moderate to severe outbreaks, however, re-moving infected leaves reduces yield even more effectively thanBiological Control. In 1997, 13 taro cultiva

2 rs resistant to leafthousands of these p
rs resistant to leafthousands of these plants to farmers. Twenty resistant cultivarsbered for testing. Due to continued use, the cultivars are still knownin American Samoa by their numbers. Popular cultivars include Root and Corm Rot. Species of the fungus best known as “damping-off” fungi. They attack seedlings in nurs-eries and in the field. Taro root and corm rots caused by Cultural Control. The best control is to exclude in disease-free fields. Once the fun-gus is established in the soil, it is difficult and expensive to controlBiological Control. No taro is immune to Pythium rots but aTusi Tusialo Vale and . These varieties, how-ever, are susceptible to taro leaf blight and are not a root rot con- Cultural Control. Most taro growers smash armyworms withtheir hands when infestations are light. Heavily infested leavesBiological Control. Some armyworm eggs are killed by preda-tory wasps in American Samoa. Traditional methods are also used, around the taro field. aro Planthopper. The female planthopper (Tarophagusproserpinamost common during cool weather, plant senescence or over-popu-lation. Long-distance spread is by the long-winged form and bywith planthopper eggs in the stems. Two seriousCultural Control. Planting insect-free can delay the onset of an attack. Some farmers torch the insectsBiological Control. The mirid bug, , is effec-tive in controlling planthoppers in Hawai’i, Guam and Ponape. Itthe low incidence and severity of planthopper infestations. Our This work was partially funded by a grant from CSREES For further information please contact American Samoa Prepared by Fred Brooks, Plant Pathologist,AHNR.

GOVERNMENT OF SAMOA AND UNICEF2006

Upland vs. Wet Taro Production PracticesTaro can be grown under upland conditions, which means that the fields are rain-fed or irrigated but not flooded. Most of the taro in the world is grown under u

Shigeyuki . Kihara. lived in Indonesia and Japan before she immigrated to New Zealand in 1989. She obtained an Advanced Diploma in Fashion Design and Technology at Massey University, Wellington, New Zealand. .

Published by the College of Tropical Agriculture and Human Resources C

ROBERT KUHLKEN AND ANDREW CROSBY ROOT CROPS FORMED THE BASIS OF SUBSISTENCE in the majority of prehistoric Pacific Island agrosystems. Besides yams (Dioscorea spp.), the most important doÂ­mest