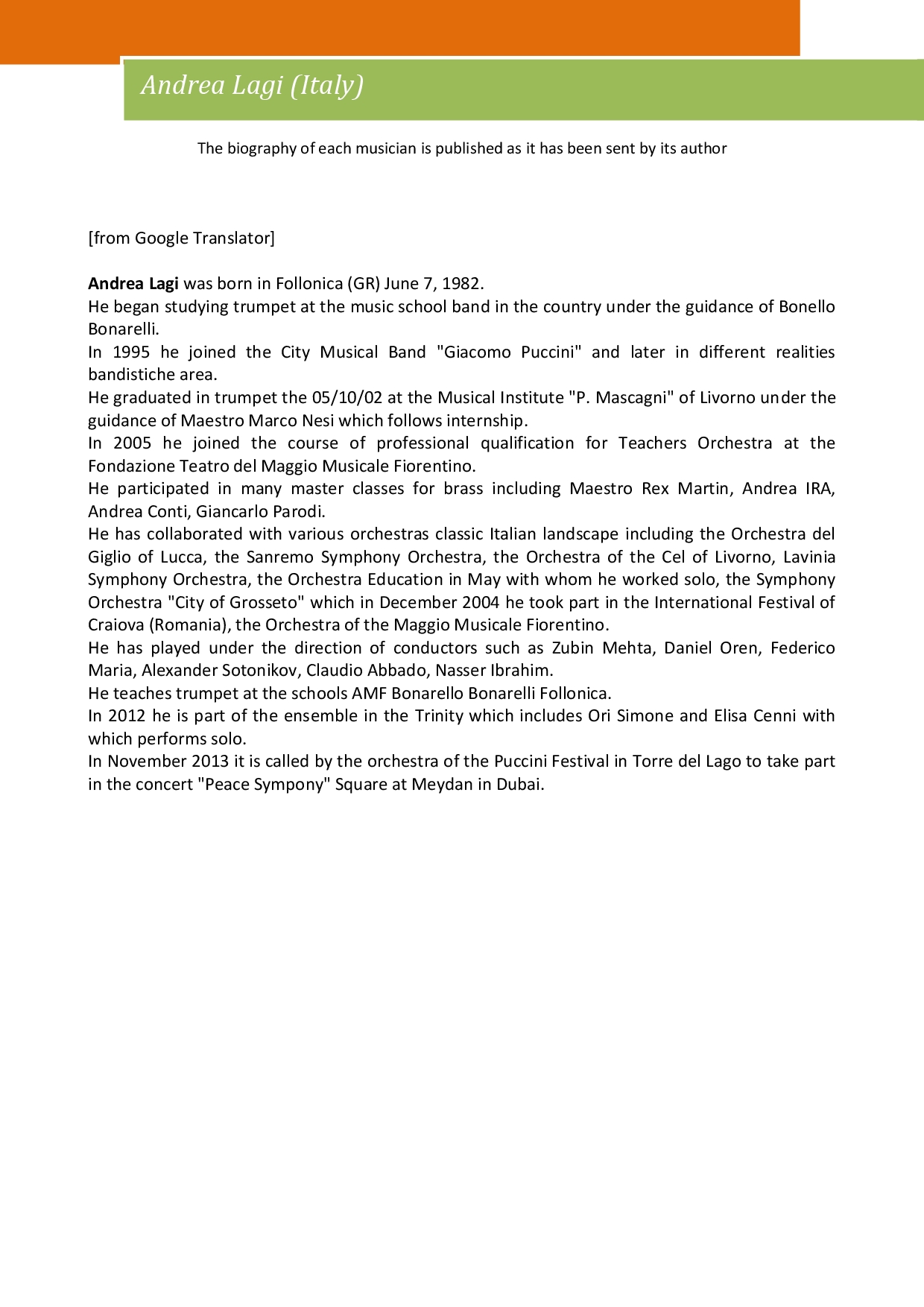 Coming Together and Staying Safe

primer for alkaline or porous substrates

Document on Subject : "The biography"— Transcript:

1 The biography of each musician is
The biography of each musician is published as it has been sent by its autho r [ from Google Translator] Andrea Lagi was born in Follonica (GR) June 7, 1982. He began studying trumpet at the music school ban d in the country under the guidance of Bonello Bonarelli. In 1995 he joined the City Musical Band "Giacomo Puccini" and later in different realities bandistiche area. He graduated in trumpet the 05/10/02 at the Musical Institute "P. Mascagni" of Livorno un der the guidance of Maestro Marco Nesi which follows internship. In 2005 he joined the course of professional qualification for Teachers Orchestra at the Fondazione Teatro del Maggio Musicale Fiorentino. He participated in many master classes for brass inc luding Maestro Rex Martin, Andrea IRA, Andrea Conti, Giancarlo Parodi. He has collaborated with various orchestras classic Italian landscape including the Orchestra del Giglio of Lucca, the Sanremo Symphony Orchestra, the Orchestra of the Cel of Livorno, L avinia Symphony Orchestra, the Orchestra Education in May with whom he worked solo, the Symphony Orchestra "City of Grosseto" which in December 2004 he took part in the International Festival of Craiova (Romania), the Orchestra of the Maggio Musicale Fiore ntino. He has played under the direction of conductors such as Zubin Mehta, Daniel Oren, Federico Maria, Alexander Sotonikov, Claudio Abbado, Nasser Ibrahim. He teaches trumpet at the schools AMF Bonarello Bonarelli Follonica. In 2012 he is part of the ens emble in the Trinity which includes Ori Simone and Elisa Cenni with which performs solo. In November 2013 it is called by the orchestra of the Puccini Festival in Torre del Lago to take part in the concert "Peace Sympony" Square at Meydan in Dubai. Andrea La gi (Italy)

This sample biography unit, appropriate for various ages, can be used with your glossary handout to better understand what each part of the . UbD. framework entails.. Illustrative Example:. Unit on Biography.