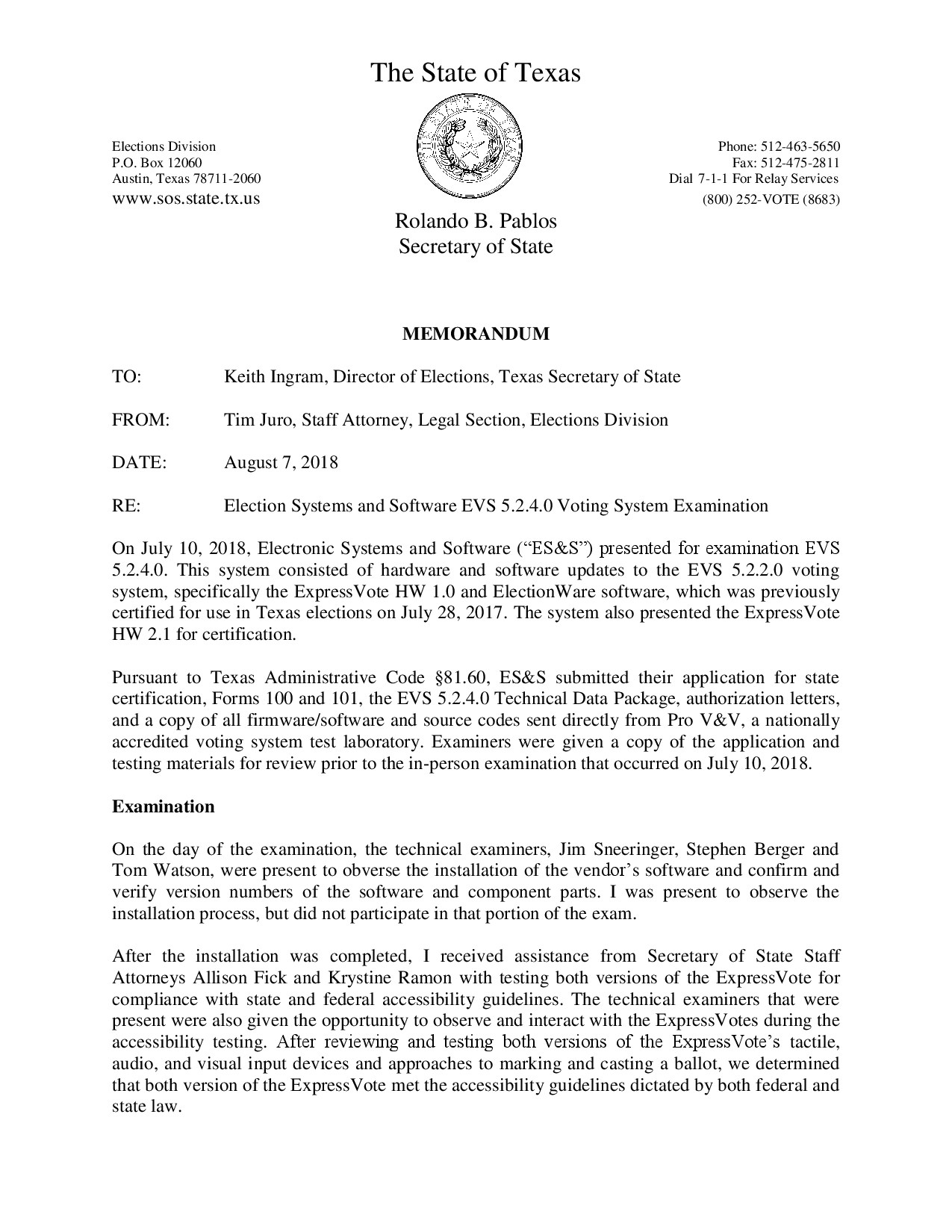 The State of Texas

Document on Subject : "The State of Texas"— Transcript:

1 The State of Texas Rolando B. Pablos Se
The State of Texas Rolando B. Pablos Secretary of State Elections Division P.O. Box 12060 Austin, Texas 78711-2060 www.sos.state.tx.usPhone: 512-463-5650 Fax: 512-475-2811 Dial 7-1-1 For Relay Services (800) 252-VOTE (8683) MEMORANDUM TO: Keith Ingram, Director of Elections, Texas Secretary of State FROM: Tim Juro, Staff Attorney, Legal Section, Elections Division DATE: August 7, 2018 RE: Election Systems and Software EVS 5.2.4.0 Voting System Examination On July 10, 2018, Electronic Systems and Software (“ES&S”) presented for examination EVS 5.2.4.0. This system consisted of hardware and software updates to the EVS 5.2.2.0 voting system, specifically the ExpressVote HW 1.0 and ElectionWare software, which was previously certified for use in Texas elections on July 28, 2017. The system also presented the ExpressVote HW 2.1 for certification. Pursuant to Texas Administrative Code §81.60, ES&S submitted their application for state certification, Forms 100 and 101, the EVS 5.2.4.0 Technical Data Package, authorization letters, and a copy of all firmware/software and source codes sent directly from Pro V&V, a nationally accredited voting system test laboratory. Examiners were given a copy of the application and testing materials for review prior to the in-person examination that occurred on July 10, 2018. Examination On the day of the examination, the technical examiners, Jim Sneeringer, Stephen Berger and Tom Watson, were present to obverse the installation of the vendor’s software and confirm and verify version numbers of the software and component parts. I was present to observe the installation process, but did not participate in that portion of the exam. After the installation was completed, I received assistance from Secretary of State Staff Attorneys Allison Fick and Krystine Ramon with testing both versions of the ExpressVote for compliance with state and federal accessibility guidelines. The technical examiners that were present were also given the opportunity to observe and interact with the ExpressVotes during the accessibility testing. After reviewing and testing both versions of the ExpressVote’s tactile, audio, and visual input devices and approaches to marking and casting a ballot, we determined that both version of the ExpressVote met the accessibility guidelines dictated by both federal and state law. After the accessibility review w

2 as completed, the vendor presented an ov
as completed, the vendor presented an overview of the EVS system and the changes introduced in EVS 5.2.4.0. Examiners were then given the opportunity to test each piece of equipment with a pre-marked “test deck” of ballots to ensure that the equipment performed the tasks required under state law and accurately tabulated the ballots cast. The pre-marked test deck was marked and hand tallied by staff from the Secretary of State’s office on ballots provided by the vendor. The vendor was not previously made aware of how the ballots would be marked. The marked ballots were then voted and marked by the ExpressVote units. Write-ins were adjudicated using the ElectionWare software and the final tabulation for all ballots was completed using a DS200 and the ElectionWare software. The tabulation report from ElectionWare matched the hand tally of the pre-marked test deck that was completed by the Secretary of State’s office.Issues On the ballot box access flap for the DS200 unit, there are two locks; however, these two locks are able to be opened with the same barrel key. For implementation in Texas during early voting, the unit would need to have the ballot access secured by two locks with two separate keys. After discussing this issue with ES&S, it is possible to place an additional lock with a separate key in an area that would normally contain a seal. Placing a lock at that location would not inhibit the ability of the unit to be properly sealed in accordance with Texas law and allows the unit to be locked with two locks using separate keys. Conclusions Over the course of in-person examination, and in the review of the materials that were contained in the vendor’s application, there was no evidence that EVS 5.2.4.0 and its components failed to comply with the Voting System Standards outlined in Sections 122.001, 122.032, 122.033, and 122.0331 of the Texas Election Code or the rules outlined in Chapter 81, Subchapter C of the Texas Administrative Code. The one issue that did occur during the course of the examination was acknowledged by ES&S and a proposed implementation has been recommended. Should the Secretary of State consider certification, I recommend that ES&S provide instructions on having the ballot access flap on the DS200 sealed with two locks with two keys. Overall, EVS 5.2.4.0 met the requirements prescribed by the Texas Election Code, and the Texas Administrative Code that pertain to voting system certification. Therefore, I recommend certification of the aforementioned system

The State of Texas

The University of Texas at San Antonio

Applied Demography Society. Alumni Lecture Series. October 21, 2014. San Antonio, TX. The Office of the State Demographer disseminates demographic and related socioeconomic data to the State of Texas and the general public. The State Demographer’s Office monitors demographic and socioeconomic changes in the State in order to better inform the executive and legislative branches of Texas government. Special emphasis is placed on data that may be useful to policy makers in dealing with issues regarding the demand for state services..

University of Texas at Austin

Department of Statistics . and Data Sciences. Statistics in Action Series. March 1, 2016. Austin, TX. 2. Demography – the study of the size, distribution, and composition of populations; the processes determining these – namely, fertility, mortality, and migration; and the determinants and consequences of all of the above. .

Building a More Secure and Prosperous Texas through Expande

"... And that claim is by the right of our . manifest destiny. to overspread and to possess the whole of the continent which Providence has given us for the development of the great experiment of liberty and federated self-government entrusted to us." .

L.O. We will understand the significance of Texas becoming a state.. Lone Star Republic. Sam Houston was elected president in September 1836.. Houston asked the U.S. to annex Texas, but Jackson refused..

The State of Texas has issued some harsh anti-slacker laws.

Texas State University. MPA Course. San Marcos. , TX. September 12. , 2016. 2. Demography – the study of the size, distribution, and composition of populations; the processes determining these – namely, fertility, mortality, and migration; and the determinants and consequences of all of the above. .

IDP’s FOR INTELLIGENCE ANALYSTS AT THE TEXAS

th. , 2016. Texas.gov. Jennifer Buaas. Program Overview. Texas.gov is the official state website for Texas, providing online payment functionality to government at the state and local level.. This public private partnership is managed through a DIR contract with Texas NICUSA. .

The State of Seawater Desalination in Texas

April . 8, . 2013. Round Rock, TX. Applied Demography: Some Texas Examples. 2. Demography – the study of the size, distribution, and composition of populations; the processes determining these – namely, fertility, mortality, and migration; and the determinants and consequences of all of the above. .