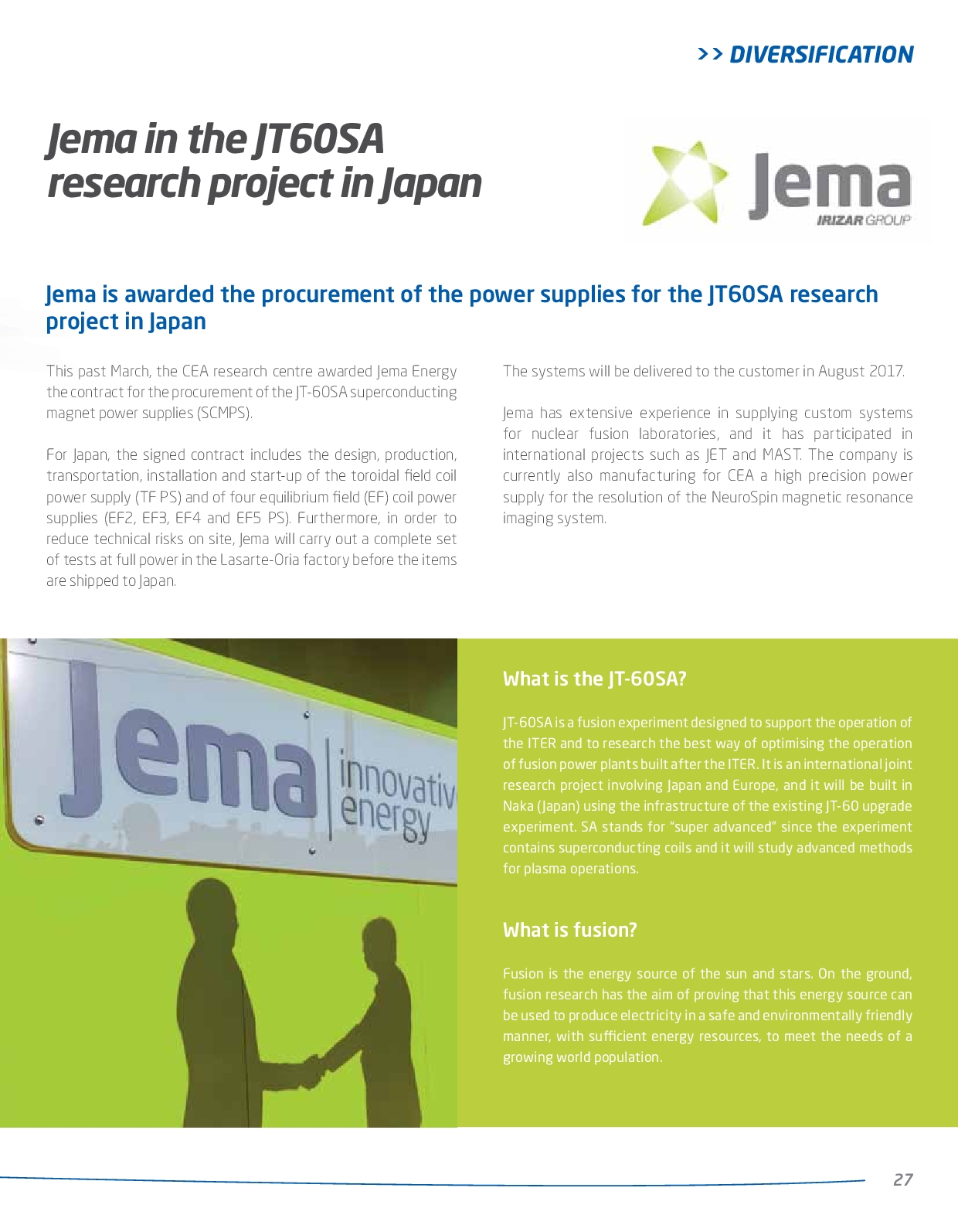 Document on Subject : "This past March the CEA research centre awarded Jema Energy the contra"— Transcript:

1 27 This past March, the CEA research cen
27 This past March, the CEA research centre awarded Jema Energy the contract for the procurement of the JT-60SA superconducting magnet power supplies (SCMPS). The systems will be delivered to the customer in August 2017. People & Coaches // October 2013Brazil and MexicoAfter establishing the rst Jema subsidiary in the United States in 2012, the company continues its commitment towards undertaking new markets and large energy projects on the other side of the Atlantic. The new additions this year are Brazil and Mexico, which are previously familiar destinations in the critical power systems area for which Jema has already delivered projects to o-shore oil rigs along Mexico’s Pacic coast.With the aim of strengthening the company’s presence in Mexico while oering customers with a closer and more personalised service, Jema has launched its commercial operations in Queretaro, Mexico. Without a doubt, Irizar’s infrastructure and solidity in this This year, Jema will deliver its powerful photovoltaic systems in Ecuador. These two ambitious projects in the region of Manabí, of 30MW and 12MW, will have a solar radiation of 1,737 kWh per square meter and year. For Jema, this project marks the launch of the new Worldwide Solutions service that supplies and starts-up photovoltaic inverters anywhere in the world. These are turnkey projects in which c

2 ustomers place the entire power portion
ustomers place the entire power portion in the hands of expert engineers at Jema. Depending on the technical specications of the photovoltaic plant, Jema’s engineering team designs a custom solution for each customer. In this case, and ew photovoltaic projectsfor the two Ecuador projects, several maritime containers will be supplied with the 600 kW photovoltaic inverters, medium voltage systems, security and communications. These systems oer high performance and ecient cutting-edge technology, and they will inject the power grid with an estimated energy production of 62,181 MWh each year.Ecuador actively promotes the use of renewable energy as a source for generating clean and lasting energy for the nation’s development. country gives JEMA an unbeatable opportunity to achieve its short-term commercial objectives. Brazil also oers great business opportunities for the company. The economic growth and the increased demand for energy reveal a promising future for the energy sector and critical power system suppliers. Large engineering rms are being awarded the construction of numerous power plants, which are often combined cycle, steam and renewable, to full the nation’s needs. JEMA’s products are already prepared to oer their maximum performance and quality, complying with the strictest international technical regulations

People & Coaches // October 2012 // 23 IZAR GROUPThese systems are monophasic and triphasic and have an innovative, exclusive design at the input stage. They are small, reliable and have a higher ener

the Bay Bridge, through the Caldecott Tunnel outside Oakland, past the

PROMOTION BOARD MARCH 20. 2015 DRILL AREA MUST BE IN CLASS A uniform Reporting to the board Black History/ Military Leaders Colin Powell a black 4-star general in the United States Army Drill Movements