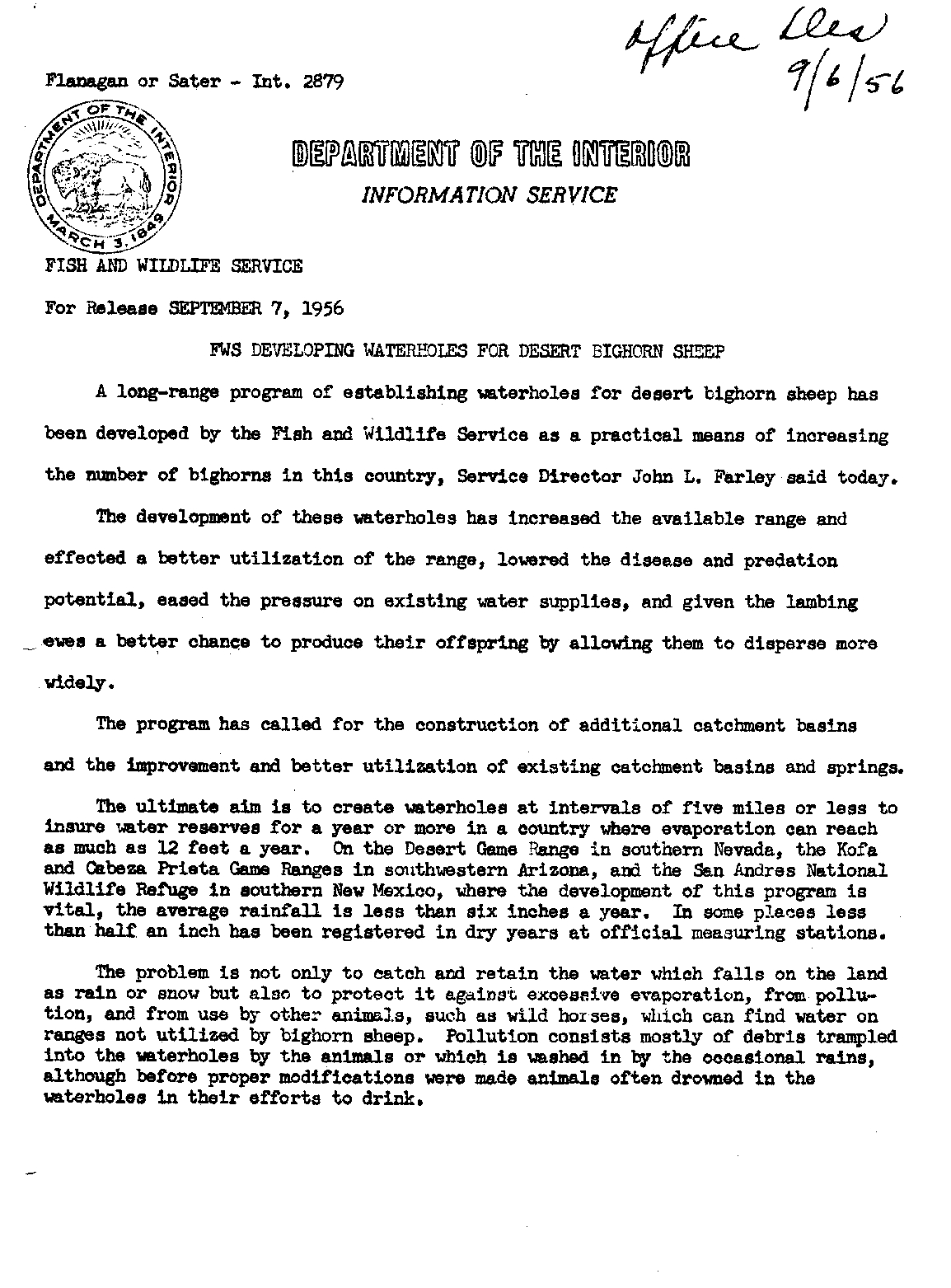 To protect against evaporation Tgsize guzzlers patterned after the ng

Document on Subject : "To protect against evaporation Tgsize guzzlers patterned after the ng"— Transcript:

1 To protect against evaporation, T&g-size
To protect against evaporation, T&g-size guzzlers," patterned after the ngeJ.linaaeous guzzlerss which Western States use to conserve water for upland birds, u~re developed, These consist of an underground storage vault, suitably covered to protect against the rays of the sun and with the wter made available to the animals by a ramp uhich permits them to walk to the water's edge, regardless of its depth. Such ramps have also been in the smooth rock sides of natural catchment b86ins in which animals previously had drowned. Water is guided into the storage wult by concrete or stone aprons. IA some instances it is possible to t&e advantage of natural coves on overhanging walls for shade protection against evaporation. IA other instances concrete dams are constructed across gullies or waterways. These dams are usually less than 4.0 feet long and about 10 or 12 feet high. For the first few years these dams impound water which is available for the sheep. Gradually, however, the area behind the dam is filled with sand, silt and rocks. Flood water sosklng into this gravel is stored and protected against excessive evaporation. Capped

2 pipes, which uere installed through the
pipes, which uere installed through the concrete dam when it was built, permit the utilization of this water supply, the drawcoff from the bottcQl being fast enough to supply the needs of the sheep but slow enough to make the supply last for many months. To protect the waterholes from use by animals which can firrd wzter elsewhere, the Fish and Wildlife Service places the waterholes in spots accessible only to bighorns or installs a special fence which permits the passage of sheep but which keeps out larger animala. That such protection is necessary is evidenced by the -&act that one of 10 horses completely utilized one small spring which had previously been used by 30 or ~$0 bighorns. The types of fence ususlly used has the lower strand high enough to permit the sheep to go under but lew enough to keep the horses out. Beoause horses have been able to paw down ordinary fences the Fish and wildlife Service has learned to take speoial precautions. A bra&et, about breast high, is placed on eaoh post. Barbed wire, strung along brackets, keeps the horse too far from the fence proper to allow any pawing down of the wires. xxx - P.N. 336

To protect against evaporation Tgsize guzzlers patterned after the ng

Evaporation What is evaporation?

Evaporation is the process in which a liquid changes to the gaseous state at the free surface, below the boiling point through the transfer of heat energy . The rate of evaporation is depended on the

Liquids have molecules moving around in them. . Temperature is the average kinetic energy (which depends on the speed) of these molecules.. Some are moving. faster than others!. If they are moving fast enough, at just the right angle,.

Daily Operations and Accounting. Daily estimates are used for operations and accounting at certain reservoirs, but not all. Estimates are typically based on pan evaporation measurements or reference evapotranspiration.

IRG I. A Novel Approach to Addressable 4

Teradot. /in. 2. Patterned media. State-of-the-art top-down patterning methods are not sufficient for the fabrication of ultrahigh-density patterned magnetic media, which requires a lithographic resolution beyond 1 .

Evapotranspiration or ET. 62% of precipitation that falls on the continents is evaporated. Understanding and predicting climate change. Q=P-ET. P-ET is the water available for use. ET "loss" supports ecosystems and agriculture.

how the sun and the ocean interact in the . water cycle. .. STAAR 2013 #15; RC 3; Supporting. 1. . Which of the following events in the water cycle is an example of solar energy being absorbed?. A. Water vapor condensing to form clouds.