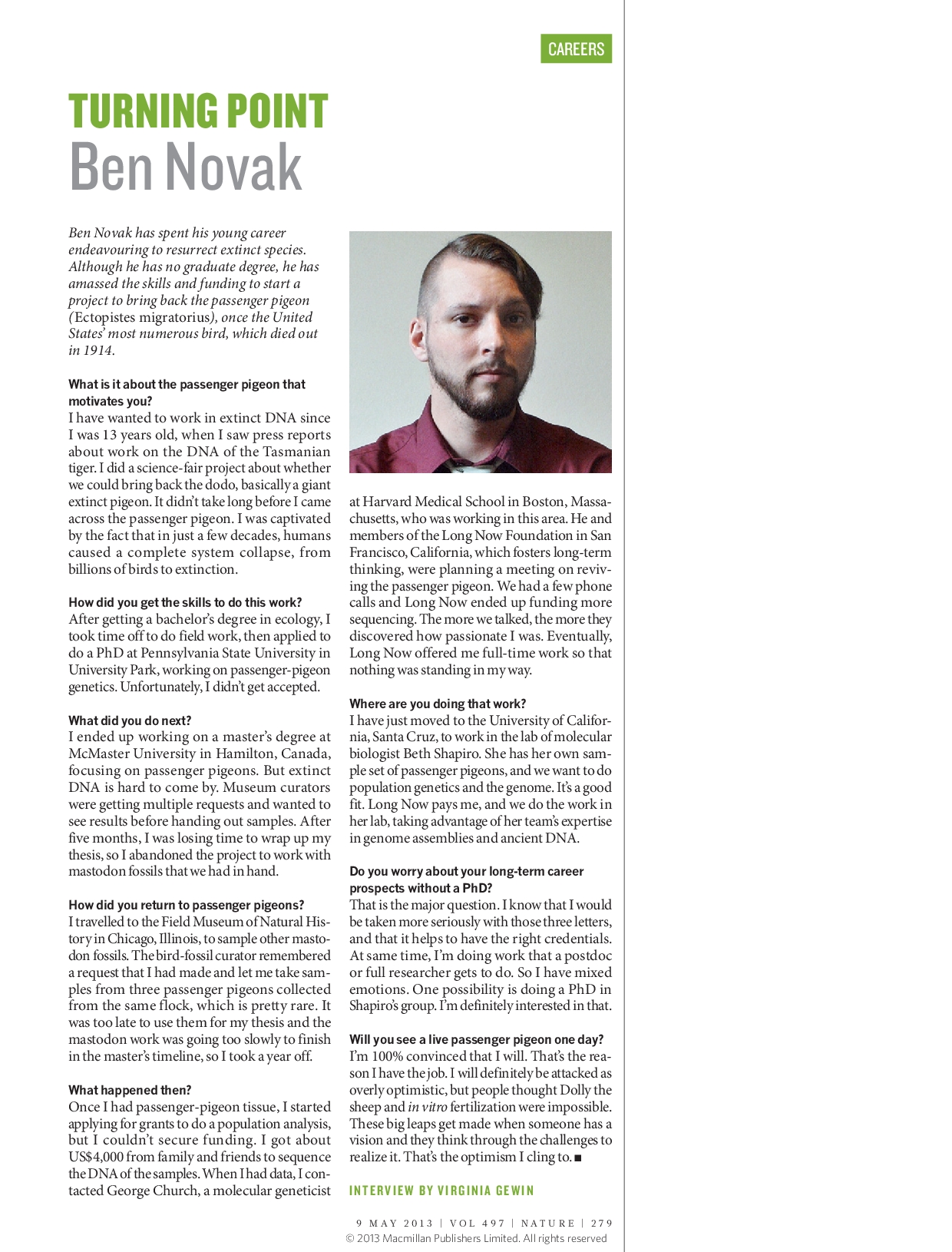 1 TURNING POINT Ben Novak Ben Novak has sp
TURNING POINT Ben Novak Ben Novak has spent his young career endeavouring to resurrect extinct species. Although he has no graduate degree, he has amassed the skills and funding to start a project to bring back the passenger pigeon ( Ectopistes migratorius ), once the United States’ most numerous bird, which died out in 1914. What is it about the passenger pigeon that motivates you? I have wanted to work in extinct DNA since about work on the DNA of the Tasmanian tiger. I did a science-fair project about whether we could bring back the dodo, basically a giant extinct pigeon. It didn’t take long before I came across the passenger pigeon. I was captivated by the fact that in just a few decades, humans caused a complete system collapse, from billions of birds to extinction. How did you get the skills to do this work? After getting a bachelor’s degree in ecology, I took time off to do field work, then applied to do a PhD at Pennsylvania State University in genetics. Unfortunately, I didn’t get accepted. What did you do next? I ended up working on a master’s degree at McMaster University in Hamilton, Canada, focusing on passenger pigeons. But extinct DNA is hard to come by. Museum curators were getting multiple requests and wanted to see results before handing out samples. After five months, I was losing time to wrap up my thesis, so I abandoned the project to work with mastodon fossils that we had in hand. How did you return to passenger pigeons? - tory in Chicago, Illinois, to sample other masto - don fossils. The bird-fossil curator remembered a request that I had made and let me take sam - ples from three passenger pigeons collected from the same flock, which is pretty rare. It was too late to use them for my thesis and the mastodon work was going too slowly to finish in the master’s timeline, so I took a year off. What happened then? Once I had passenger-pigeon tissue, I started applying for grants to do a population analysis, but I couldn’t secure funding. I got about US$4,000 from family and friends to sequence the DNA of the samples. When I had data, I con - tacted George Church, a molecular geneticist at Harvard Medical School in Boston, Massa - chusetts, who was working in this area. He and members of the Long Now Foundation in San Francisco, California, which fosters long-term thinking, were planning a meeting on reviv - ing the passenger pigeon. We had a few phone calls and Long Now ended up funding more discovered how passionate I was. Eventually, Long Now offered me full-time work so that nothing was standing in my way. Where are you doing that work? I have just moved to the University of Califor - nia, Santa Cruz, to work in the lab of molecular biologist Beth Shapiro. She has her own sam - ple set of passenger pigeons, and we want to do population genetics and the genome. It’s a good fit. Long Now pays me, and we do the work in her lab, taking advantage of her team’s expertise Do you worry about your long-term career prospects without a PhD? That is the major question. I know that I would be taken more seriously with those three letters, and that it helps to have the right credentials. At same time, I’m doing work that a postdoc or full researcher gets to do. So I have mixed emotions. One possibility is doing a PhD in Shapiro’s group. I’m definitely interested in that. Will you see a live passenger pigeon one day? I’m 100% convinced that I will. That’s the rea - son I have the job. I will definitely be attacked as sheep and in vitro fertilization were impossible. These big leaps get made when someone has a vision and they think through the challenges to realize it. That’s the optimism I cling to.  INTERVIEW BY VIRGINIA GEWIN 9 MAY 2013 | VOL 497 | NATURE | 279 CAREERS © 2013 Macmillan Publishers Limited. All rights reserved

Download - The PPT/PDF document "TURNING POINT" is the property of its rightful owner. Permission is granted to download and print the materials on this web site for personal, non-commercial use only, and to display it on your personal computer provided you do not modify the materials and that you retain all copyright notices contained in the materials. By downloading content from our website, you accept the terms of this agreement.

How to use Turning Point zappers in a

THE ROAD TO VICTORY Turning Points of WWII

At the end of the session

The Allies Fight Back

How to Transform a

When it reaches its most extreme point, itis "turning around". At that - PDF Slides