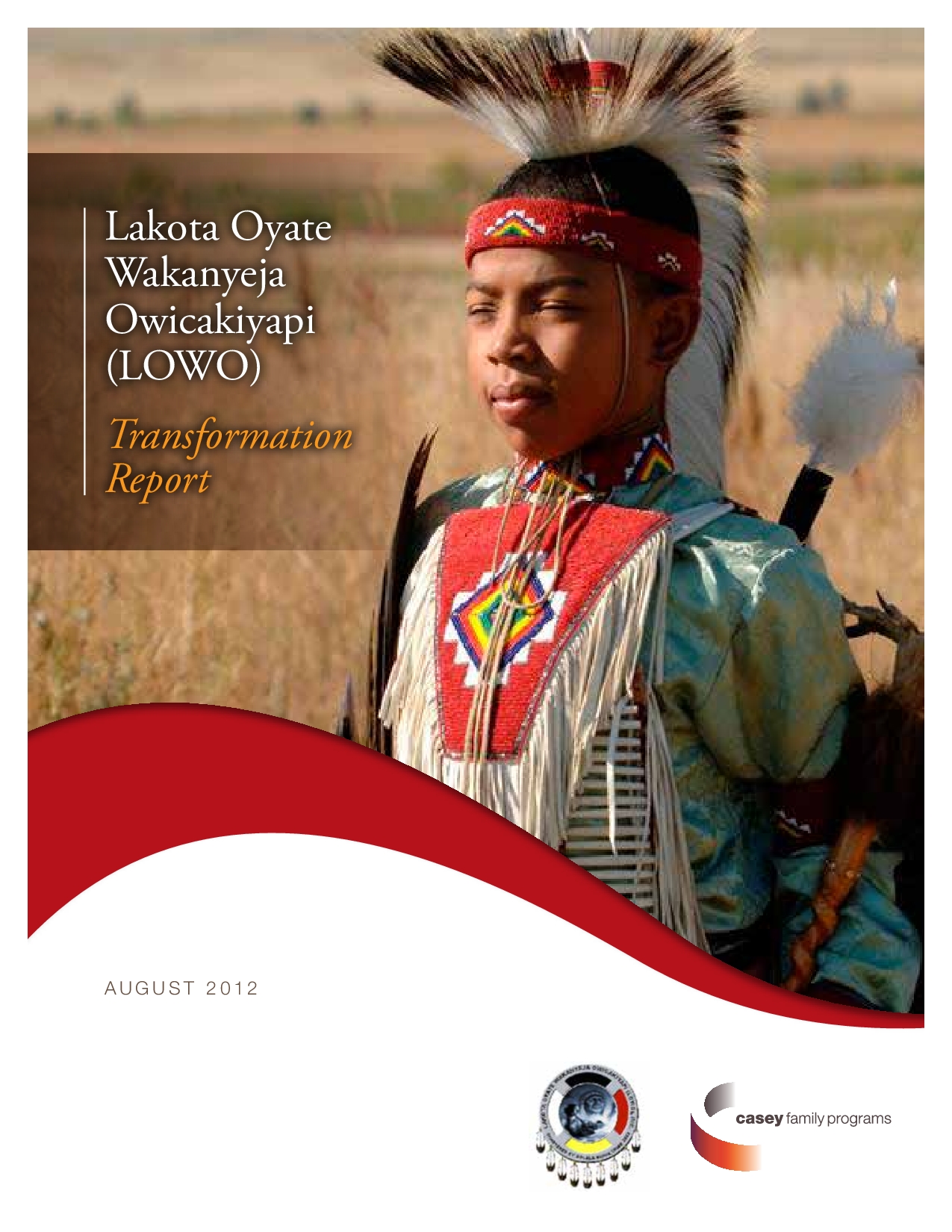 MLGW Awarded Contracts and Purchase Orders during the period April 1

1 Wakanyeja (LOWO) Transformation Report A
Wakanyeja (LOWO) Transformation Report AUGUST 2012 Lakota Oyate Wakanyeja Owicakiyapi (LOWO) and Casey Family Programs: ree Decades Collaboration on Behalf of Indian Children on the Pine Ridge ReservationFor more than three decades, Casey Family Programs has Indian programs, governments, children in support of its vision for culturally responsive services to Indian children. decades of collaboration 3 Approximately 30 years ago, Casey Family Programs established a Division in Rapid City, South Dakota, to provide direct foster care services in the region. From the beginning, the Rapid City Division made a commitment to follow the guidelines of the Indian Child Welfare Act in its work with Indian children and families. Priority was given to hiring American Indian staff to recruit American Indian foster families for children served by the Division. In early 1984, Casey began discussions with the tribal council and human services on the need for foster care services in Pine Ridge. At the time, Pine Ridge did not have a social service agency located on the reservation. In 1984, Casey’s Board of Trustees approved a plan to establish satellite ofces on or near the Pine Ridge Reservation. In 1986, th

2 e Martin Ofce was opened to serve P
e Martin Ofce was opened to serve Pine Ridge. During this same year, Casey’s Board of Trustees received a proposal from Children’s Village in Pine Ridge to remodel their facility. This request was approved in 1985 and the remodeling was completed. In 1998, Casey began construction of a satellite ofce in Pine Ridge. Construction was completed in 1999. During this time, in acknowledgement of Tribal Sovereignty, the Casey Board of Trustees approved plans to make the Pine Ridge Ofce a Casey Division with its own leadership, staff and budget.Beginning in 2002 and throughout 2003, changes were happening throughout Casey which culminated in the closure of the Casey Division Ofce in Rapid City. At this time, discussions began to transform the Pine Ridge Division from being Casey led and funded operation to a tribally-chartered Indian child welfare program in its own right—Lakota Oyate Wakaneja Owicakiyapi (LOWO). In 2002, the Pine Ridge Community introduced and initiative known as the “Integrated Child Welfare Project.” The mission of this community-driven multi-agency child welfare initiative was to integrate the child and family services on the reservation into one syst

3 em. The vision to integrate child welfar
em. The vision to integrate child welfare, juvenile justice, state social services, housing, employment, tribal government, and individual leaders on the reservation was founded on the following beliefs:Children belong with their families and with their tribe;The four Lakota values of courage, generosity, wisdom and bravery;All children should be safe;All families should be provided the comprehensive supports they need to becomeself-sufcient and inter-dependent;All children and families should b taught traditional and spiritual Lakota ways;Preserving and strengthening families;The Tiyospaye way of keeping children safe and families strongly interdependentThe Oglala Sioux tribe has the responsibility to protect and support Lakota childrenand families—legally, spiritually and culturally. 4 The anticipated results of this vision were to develop a seamless system that supports:Oglala Lakota children living with their biological families with basic needs being metincluding food, housing, and health care;Healthy families who understand the Lakota culture and live the Lakota CultureAssurances that Indian children who must be placed in care are placed with relativeswhenever possible or with other Indian fa

4 milies when family or extended family ar
milies when family or extended family are notEvery Lakota community having recreational activities available to children andfamilies and a public park in each community.The Oglala Sioux Tribal Council ofcially chartered Lakota Oyate Wakanyeja Owicakiyapi (LOWO) on April 23, 2003, to provide comprehensive child and family services on the Pine Ridge Reservation.In summary, throughout the period from 2003 to the present, Casey worked with LOWA to The development of culturally responsive practice standards to guide workers in thedelivery of services to Indian children and their families.The development of culturally relevant practice model for Family Group DecisionTraining and education in Lakota-based child welfare practices for tribal and statechild welfare staff, foster parents, spiritual and other tribal members, birth andThe provision and training on a web-based case management system that wouldcapture both case management work and outcomes for children served by LOWOknown as Harmony.The transfer of all program infrastructure and maintenance to the tribe.The transfer of the LOWO ofce in Pine Ridge to the tribe to be completed in 2012. 5 A Legacy of Investment in Indian Child Welfare: Casey Family

5 Programs Collaborative Work with the Pin
Programs Collaborative Work with the Pine Ridge Oglala SiouxServices to ChildrenBetween 1994 and 2011, more than 200 youth were served in Pine Ridge both directly by Casey Family Programs and after 2003 via contract with LOWO. These youth received a variety of service packages including foster care, permanency services, family case management, transition case management, continuing education and job training, community learning and support, and transition (133 young women and 75 young men). A total of 25 families were served in Family The average age at intake into Casey foster care services was 13 years. Services to these youth continued on average until these youth turned 18. Since 2006, no youth have aged out of care. The majority of youth served were placed with family, extended family, or Indian families on the reservation. The majority remained with, or are connected to, their families.Since 1996, ve Pine Ridge youth have received some level of college or continuing education support from Casey family Programs. Two of these youth are still in college at this time and three are not and their cases have been closed; however, Casey does accept applications for continuing education and job training a

6 fter a youth’s case has been closed
fter a youth’s case has been closed. 1979 -1984 2012 1986 -1999 Ofce Openscare placement in relationship with the •Transfer Building to TribeMartin Ofce Ofce opensTransformation•LOWO Chartered•Practice Standards•Culturally responsiveInfrastructure We-based reporting systemintroduced--Transfer Historical OverviewCasey’s Investment in Indian Child Welfare Services on Pine Ridg 6 In addition, a variety of different services were provided to Pine Ridge children by Casey Family Programs. For example:Services provided to children placed on the Pine Ridge Reservation included services to prevent placement. If this was not feasible, then foster care and respite services were provided.Although medical services were provided in the main through Indian Health Services (IHS), other medical services not covered by IHS or the tribe were provided by Casey. This included orthodontia, vision, and substance abuse disorder treatment. Case planning that involved culturally appropriate approaches and services designed to t the needs of the family. This planning involved the family, through family group decision making and crisis intervention stafng. Input by the youth occurred where app

9 uirements Account Finance • Quality Re
uirements Account Finance • Quality Resource Requirements revisions• Development ribal foster care,and guardianshipstandards• Risk • Quality TA • Court Casey’s ContinuingProgramTrauma and AttachmentWorking with Lesbian,Gay, Bi-Sexual,Transgender and YouthSelf-Injury PreventionFamily GroupConferencingTechniquesEmployment for Youth 8 Children between 1988 and 2011, Casey invested approximately $19 million in child welfare services to children on the Pine Ridge Reservation. Services included foster care payments, respite care and clothing allowances. Infrastructure In 1998, after negotiating an agreement with the Tribal Council, Casey began construction of a child welfare ofce building on the Pine Ridge Reservation. Construction was completed in 1999 at a total cost of approximately $1,400,000-- $1,300,000 for the building and $70,000 for the land. The current assessed valuation of the building is now assessed at $1,590,000.Total Financial Investment in Oglala Lakota Children on Pine RidgeBetween 1988 and 2011, Casey’s contribution to child welfare services for children and families in Pine Ridge was approximately $20 million. The vast majority of these expenses, nearly $19 million, we

10 re for staff and services for children a
re for staff and services for children and families on the reservation.A Hope for the FutureIt has been an honor for Casey to partner with Pine Ridge Sioux nation to serve children and families and create Lakota Oyate Wakanyeja Owicakiyapi. Casey learned valuable lessons about building relationships and trust, developing culturally-relevant and responsive practice and in infrastructure development for American Indian child welfare organizations. In 2012, Casey transferred the ownership of the building to the tribal government. Casey’s Indian Child Welfare Programs will end the transformation relationship with the tribe at the completion of 2012’s projects. This will not conclude our work with tribes in South Dakota. Tribes that request assistance in accessing and planning for direct Title IV-E funding, improving Indian Child Welfare Act compliance within the state child welfare system and the courts, and practice improvement will be part of this new and ongoing partnership with Casey’s Indian Child Welfare Programs and tribes in casey.org casey.org Lakota Oyate Wakanyeja Owicakiyapi (LOWO) Transformation Report report LOWO report Lakota Oyate Wakanyeja Owicakiyapi (LOWO) Transformation Report