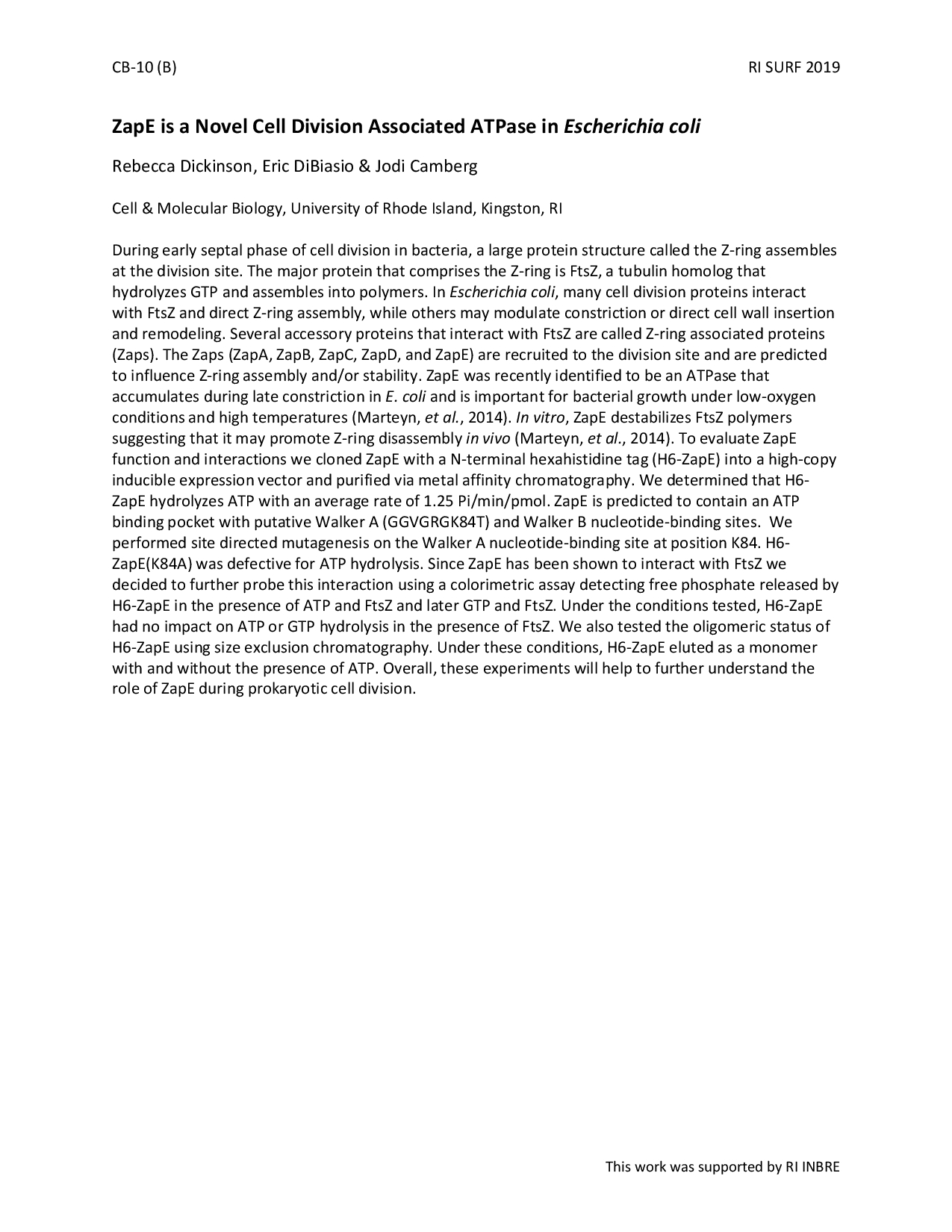 work was supported by

Document on Subject : "work was supported by"— Transcript:

1 CB - 10 ( B ) RI SURF 2019 This
CB - 10 ( B ) RI SURF 2019 This work was supported by RI INBRE ZapE is a Novel Cell Division A ssociated ATPase i n Escherichia coli Rebecca Dickinson , Eric DiBiasio & Jodi Camberg Cell & Molecular Biology , University of Rhode Island , Kingston, RI During early septal phase of cell division in bacteria, a large protein structure called the Z - ring assembles at the division site. The major protein that comprises the Z - ring is FtsZ, a tubulin homolog that hydrolyzes GTP and assembles into polymers. In E scherichia coli , many cell division proteins interact with FtsZ and direct Z - ring assembly, while others may modulate constriction or direct cell wall insertion and remodeling. Several accessory proteins that interact with FtsZ are called Z - ring associated proteins (Zaps). The Zaps (ZapA, ZapB, ZapC, ZapD, and ZapE) are recruited to the division site and are predicted to influence Z - ring assembly and/or stability. ZapE was recently identified to be an ATPase that accumulates during late constriction in E. c oli and is important for bacterial growth under low - oxygen conditions and high temperatures (Marteyn, et al. , 2014). In vitro , ZapE destabilizes FtsZ polymers suggesting that it may promote Z - ring disassembly in vivo (Marteyn, et al. , 2014). To evaluate Za pE function and interactions we cloned ZapE with a N - terminal hexahistidine tag (H6 - ZapE) into a high - copy inducible expression vector and purified via metal affinity chromatography. We determined that H6 - ZapE hydrolyzes ATP with an average rate of 1.25 Pi /min/pmol. ZapE is predicted to contain an ATP binding pocket with putative Walker A (GGVGRGK84T) and Walker B nucleotide - binding sites. We performed site directed mutagenesis on the Walker A nucleotide - binding site at position K84. H6 - ZapE(K84A) was defe ctive for ATP hydrolysis. Since ZapE has been shown to interact with FtsZ we decided to further probe this interaction using a colorimetric assay detecting free phosphate released by H6 - ZapE in the presence of ATP and FtsZ and later GTP and FtsZ. Under the conditions tested, H6 - ZapE had no impact on ATP or GTP hydrolysis in the presence of FtsZ. We also tested the oligomeric status of H6 - ZapE using size exclusion chromatography. Under these conditions, H6 - ZapE eluted as a monomer with and without the presen ce of ATP. Overall, these experiments will help to further understand the role of ZapE during prokaryotic cell division.

The Evidence-Based Practice for Employment. Why Focus on Employment?. Viewed by many as an essential part of recovery. Most consumers want to work. A typical role for adults in our society. Cost-effective alternative to day treatment.

The Evidence-Based Practice for Employment. Why Focus on Employment?. Viewed by many as an essential part of recovery. Most consumers want to work. A typical role for adults in our society. Cost-effective alternative to day treatment.

Redevelopment of an e-learning module to provide supported

Redevelopment of an e-learning module to provide supported open learning

This work is supported by the PatientCentered Outcomes Research Insti

An Outsider’s Explanation of Supported Employment

SEd. ) into your Supported Employment Program. Supported Education. 2008 IPS Medicaid code- Oregon is the only state that has an IPS supported employment Medicaid code. 2016 Oregon created a modifier to allow education services to be offered in existing IPS SE programs.

Acknowledgements:This work was supported by a grant from the Spanish Ministerio de Educaci

The work was supported by the German BMBF /VDI under 13N8737;by the German Federal Ministry of Commerce and Technology (BMWi) under 0327456 B Large-Scale HTS Bulk Fabrication Magnetic Application

misa. August 29, 2016. Karen V. Unger, MSW, . Ed.D. .. Rehabilitation through Education. Portland, OR, USA . Supported Education. Helping people with mental . illness/disabilities . participate in an education program so they may receive the education and training they need to achieve their learning and recovery goals and become gainfully employed in the job or career of their choice.

* of the Republic of Serbia under Grant numbers OI - 178027 and TR - 32032. Whispered speech database: design, processing and application Abstract. This paper presents creation of a whispered speec