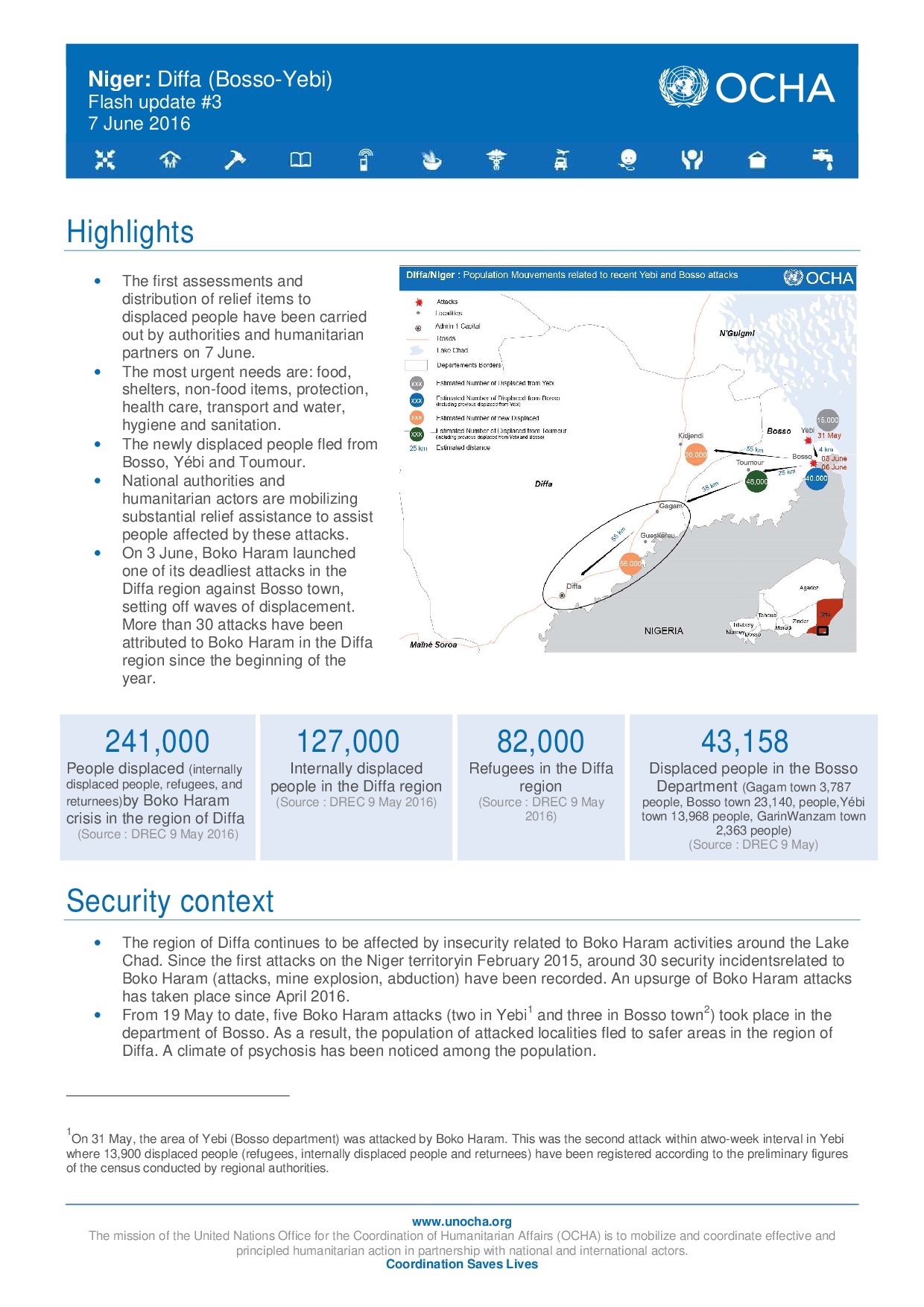 IN THE SUPERIOR COURT FOR THE STATE OF ALASKA

1 www.unocha.org The mission of the Unite
www.unocha.org The mission of the United Nations Office for the Coordination of Humanitarian Affairs (OCHA) is to mobilize and coordinate effective and principled humanitarian action in partnership with national and international actors. Coordination Saves Lives Niger: Diffa (Bosso-Yebi) Flash update #3 7 June 2016 Highlights · The first assessments and distribution of relief items to displaced people have been carried out by authorities and humanitarian partners on 7 June. · The most urgent needs are: food, shelters, non-food items, protection, health care, transport and water, hygiene and sanitation. · The newly displaced people fled from Bosso, Yébi and Toumour. · National authorities and · On 3 June, Boko Haram launched one of its deadliest attacks in the Diffa region against Bosso town, setting off waves of displacement. More than 30 attacks have been attributed to Boko Haram in the Diffa region since the beginning of the year. Security context · The region of Diffa continues to be affected by insecurity related to Boko Haram activities around the Lake Chad. Since the first attacks on the Niger territoryin February 2015, around 30 security incidentsrelated to Boko Haram (attacks, mine explosion, abduction) have been recorded. An upsurge of Boko Haram attacks has taken place since April 2016. · From 19 May to date, five Boko Haram attacks (two in Yebi and three in Bosso town) took place in the department of Bosso. As a result, the population of On 31 May, the area of Yebi (Bosso department) was attacked by Boko Haram. This was the second attack within atwo-week interval in Yebi where 13,900 displaced people (refugees, internally displaced people and returnees) have been registered according to the preliminary figures of the census conducted by regional authorities. 241,000 People displaced (internally displaced people, refugees, and returnees)by Boko Haram crisis in the region of Diffa (Source : DREC 9 May 2016) 127,000 Internally displaced people in the Diffa region (Source : DREC 9 May 2016) 82,000 Refugees in the Diffa region (Source : DREC 9 May 2016) 43,158 Displaced people in the Bosso Department (Gagam town 3,787 people, Bosso town 23,140, people,Yébi town 13,968 people, GarinWanzam town 2,363 people) (Source : DREC 9 May) Flash update Diffa 5 June 20162 United Nations Office for the Coordination of Humanitarian Affairs (OCHA) Coordination Saves Lives | www.unocha.org Humanitarian consequences · The populations of Bosso town and Yebi have moved to safer areas in the axis Bosso – Kidjendi and the axis Bosso-Gagam-Gueskerou- Diffa. Bosso and Yebi are reportedly empty of their inhabitants. A large number of people are also fleeing Toumour that was among the first areas of resettlement of people who fled Bosso. It has been also reported that some displaced people intend to move to Zinder, Tahoua and Maiduguri in Nigeria. · No official figures on population movements are available however the attacks in Bosso and insecurity in Toumour could have displaced tens of thousands of people in affected areas. · Most of these populations have found refuge in host families while others are living in very precarious conditions in public buildings or open spaces. · The first reports from the fi

2 eld indicate that displaced people are i
eld indicate that displaced people are in urgent need of: water, food, shelters, protection including psychosocial support, health care, transport, non-food items as well as adequate hygiene and sanitation conditions. · The volatile security context limits the access of humanitarians to displaced people and the access of displaced people to required assistance. · This new displacement crisis is aggravating the vulnerability of host communities and of those who have been displaced more than once already. · Around 30 humanitarian organizations cover the department of Bosso. Response · The wounded are treated in regional and military health facilities while humanitarian organizations provided health structures with trauma kits. A mobile clinic provides health care, psychosocial support to displaced people in Ngarou Mwanzam located in the axis Gagam-Kidjendi. · On 7 June, regional authorities and humanitarian partners carried out several assessments and organized relief items’ distributions in Diffa and other localities where people are resettled. Potable water, fortified high-energy biscuits (BP 5) have been distributed around Ngarou Mwanzam et Kidjendi. · Stocks of relief items such as food, non-food items, shelters and water are available in Diffa. These items will be distributed as soon as possible. Humanitarian actors are identifying other available resources. Coordination · On 4 June, ad hoc humanitarian coordination meetings took place in Niamey (under the leadership of the Humanitarian Coordinator) and in Diffa (under the leadership of regional authorities and OCHA). · In both Diffa and Niamey it has been agreed to urgently dispatch existing relief items to affected population. · Joint rapid assessment missions are scheduled in the comings days to clearly identify needs and provide timely and efficient assistance. · On 6 June, OCHA organized a coordination meeting in Diffa to organize rapid assessment missions and assess existing humanitarian stocks. · On 7 June, an ad hoc Humanitarian Country Team (HCT) meeting chaired by the Humanitarian Coordinator took place in Niamey. The HCT reviewed the existing relief stocks that could be used in Diffa. · On 7 May, the Humanitarian Coordinator accompanied by members of the HCT met with the Prime Minister to analyse the humanitarian situation in Diffa . · On 7 June, humanitarian actors and regional authorities in Diffa jointly planned assessments and relief items distribution. On 3 June, hundreds of Boko Haram elements attacked a military position in Bosso. This is one of the deadliest Boko Haram attacks in Niger. Nigerien authorities declared that 32 soldiers (30 Nigeriens and 2 Nigerians) were killed and around 70 others. On 6 June, another attack was launched by Boko Haram in Bosso. No information was available at time of writing.COOPI, Care, APBE, IRC, ICRC, CRL, IFRC, ACTED, Red Cross, OIM, APBE,WFP, UNFPA, UNHCR, Samaritan Purse, Save the Children, Karkara, MSF, IRC, DRPE, SFCC, Red Cross, OXFAM, FAO, Catholic Relief service , SOS VE, IEDA, WHO, World Vision, UNICEF, Agir Plus 21, UNDP