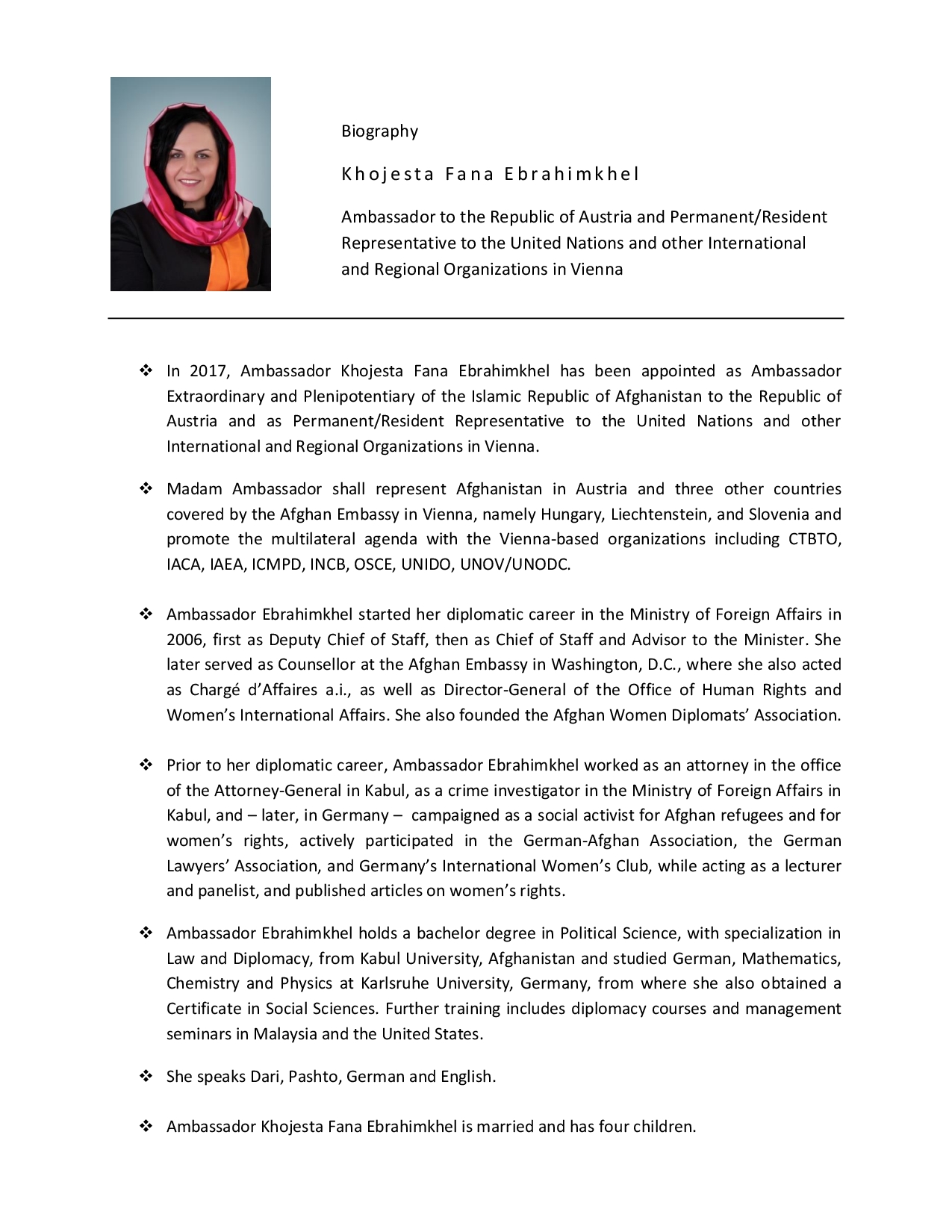 1 Biography Khojesta Fana Ebrahimkhel
Biography Khojesta Fana Ebrahimkhel Ambassador to the Republic of Austria and Permanent/Resident Representative to the United Nations and other International and Regional Organizations in Vienna  In 2017, Ambassador Khojesta Fana Ebrahimkhel has been appointed as Ambassador Extraordinary and Plenipotentiary of the Islamic Republic of Afghanistan to the Republic of Austria and as Permanent/Resident Representative to the United Nations and other International and Regional Organizatio ns in Vienna.  Madam Ambassador shall represent Afghanistan in Austria and three other countries covered by the Afghan Embassy in Vienna , namely Hungary, Liechtenstein , and Slovenia and promote the multilateral agenda with the Vienna - based organizations including CTBTO, IACA, IAEA, ICMPD , INCB, OSCE, UNIDO, UNOV/UNODC.  Ambassador Ebrahimkhel started her diplomatic career in the Mini stry of Foreign Affairs in 2006, first as Deputy Chief of Staff, then as Chief of Staff and Advisor to the Minister. She later served as C ounsellor at the Afghan Embassy in Washington, D.C. , where she also acted as Chargé d’Affaires a.i. , as well as Director - General of the Office of Human Rights and Women’s International Affairs. She also founded the Afghan Women Diplomats’ Association.  Prior to her diplomatic career , Ambassador Ebrahimkhel worked as an attorney in the office of the Attorney - General in Kabul, as a crime investigator in the Ministry of Foreign Affairs in Kabul, and – later, in Germany – campaigned as a social activist for Afghan refugees and for women’s rights , actively participated in the German - Afghan Association , the German Lawyers’ Association, and Germany’s International Women ’s Club, while acting as a lecturer and panelist , and published articles on women’s rights .  Ambassador Ebrahimkhel holds a bachelor degree in Political Science, with specialization in Law and Diplomacy, from Kabul University, Afghanistan and studied German, Mathematics, Chemistry and Physics at Karlsruhe University, Germany, from where she also o btained a Certificate in Social Sciences. Further training includes diplomacy courses and management seminars in Malaysia and the United States.  She speaks Dari, Pashto, German and English .  Ambassador Khojesta Fana Ebrahimkhel is married and has four children .

For over 100 years… The full biography and cause of death…