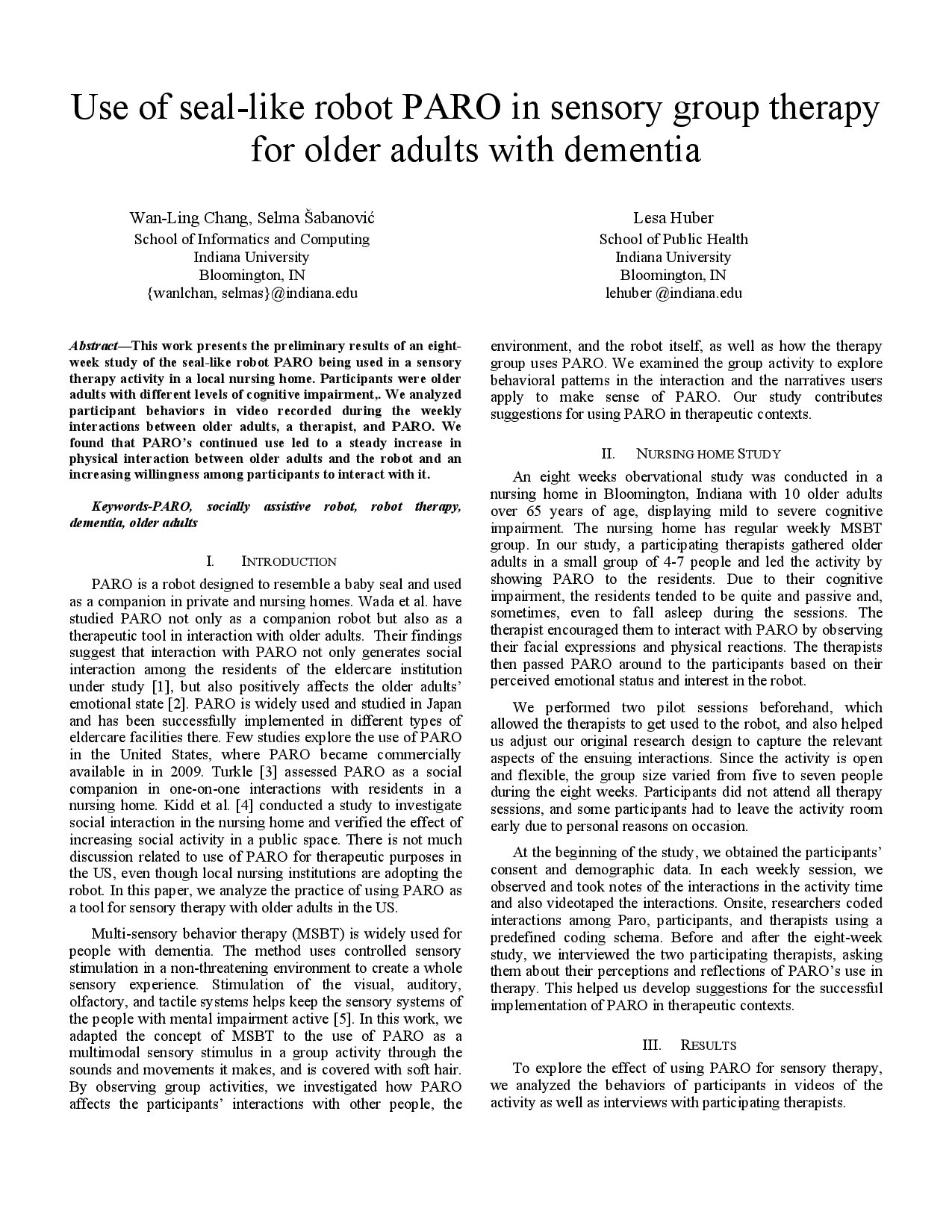 School of Informatics and Computing Indiana University Bloomington IN

1 School of Informatics and Computing Indi
School of Informatics and Computing Indiana University Bloomington, IN {wanlchan, selmas}@indiana.edu Lesa Huber School of Public Health Indiana University Bloomington, IN lehuber @indiana.edu AbstractčThis work presents the preliminary results of an eight- week study of the seal-like robot PARO being used in a sensory therapy activity in a local nursing home. Participants were older adults with different levels of cognitive impairment,. We analyzed participant behaviors in video recorded during the weekly interactions between older adults, a therapist, and PARO. We found that PAROšs continued use led to a steady increase in physical interaction between older adults and the robot and an increasing willingness among participants to interact with it. Keywords-PARO, socially assistive robot, robot therapy, dementia, older adults I. INTRODUCTION PARO is a robot designed to resemble a baby seal and used as a companion in private and nursing homes. Wada et al. have studied PARO not only as a companion robot but also as a therapeutic tool in interaction with older adults. Their findings suggest that interaction with PARO not only generates social interaction among the residents of the eldercare institution under study [1], but also positively affects the older adultsš emotional state [2]. PARO is widely used and studied in Japan and has been successfully implemented in different types of eldercare facilities there uses controlled sensory stimulation in a non-threatening environment to create a whole sensory experience. Stimulation of the visual, auditory, olfactory, and tactile systems helps keep the sensory systems of the people with mental impairment activee]. In this work, we adapted the concept of MSBT to the use of PARO as a multimodal sensory stimulus in a facial expressions and physical reactions. The therapists then passed PARO around to the participants based on their perceived emotional status and interest in the robot. We performed two pilot sessions beforehand, which allowed the therapists to get usedthe robot, and also helped us adjust our original research design to capture the relevant aspects of the ensuing interactions. Since the activity is open and flexible, the group siz

2 e varied from five to seven people durin
e varied from five to seven people during the eight weeks. articipants did not attend all therapy sessions, and some participants had to leave the activity room early due to personal reasons on occasion. At the beginning of the study, we obtained the participantsš consent and demographic data. In each weekly session, we observed and took notes of the interactions in the activity time and also videotaped the interactions. Onsite, researchers coded interactions among Paro, participants, and therapists using a predefined coding schema. Before and after the eight-week the sessions varied, we calculated the average interaction time per person the linear regression line in Fig.1 shows a general increasing trend. This indicates participants chose to spend more time interacting with the robot as the study progressed. Figure 2. individuals or small groups of two or three people interacted with PARO at a time, which we defined as an interaction section. We coded the start and end point of the section and analyzed the ratio of physical interactions in it. The data varies among participants. Half of the participants and the instead of being passive, is a sign of success in terms of sensory therapy. In our following analysis, by coding verbal and visual interaction, we will look for further evidence of potential positive effects on interaction among participants and of participants with their environment. In our study and in interviews with the therapists, we also found that it might be more efficient to use PARO in one-on-one interactions or in small groups of less than three people. These suggestions can guide the design of therapeutic interactions using PARO with people with dementia. ACKNOWLEDGMENT We are grateful to Nov. 2004.. [3] S. Turkle, W. Taggart, C. D. Kidd, and O. DastÄ, ęRelational artifacts with children and elders: the complexities of cybercompanionship,ė Connection Science, vol. 18, no. 4, pp. 347ą361, 2006.K. Elissa, ęTitle of paper if known,ė unpublished. [4] C. D. Kidd, W. Taggart, and S. Turkle, ęA sociable robot to encourage social interaction among the elderly,ė in Proceedings 2006 IEEE International Conference on Robotics and Automation, 2006. ICRA 2006, 2006, pp. 3972

The Indiana University School of Informatics

The Indiana University School of Informatics

School of Informatics and Computing Indiana University Bloomington IN

Proposal for Indiana University Bloomington to host the

Big Data in Research and Education

Big Data in Research and Education

THE PARADOX OF MARGINALITY (Indiana University, Bloomington) The que

IN 47405, USA; 3 Faculty of Sciences of Physical Activity and Sport, University of Valencia, c/Gasc

29 . February . ŌĆō 2 March 2016. ". Where students turn into teachers". Involving former CSC participants to deliver advanced . education. i. = inverted. The CERN School of Computing. Aims at creating a common culture in scientific computing among young scientists and engineers involved in particle physics or other sciences, as a strategic direction to favor mobility and to facilitate the development of large computing-oriented transnational projects. .