American Folk Artist. 1. Anna Mary Robinson. September 7,1860-December 13, 1961. Anna Mary Robinson was the 3. rd. of 10 children. Born on a farm, farming was her life until she could no longer do it due to age and arthritis. What little formal education she had was in a one room school house. .... ID: 146198 Download Presentation


Download Presentation - The PPT/PDF document "Grandma Moses" is the property of its rightful owner. Permission is granted to download and print the materials on this web site for personal, non-commercial use only, and to display it on your personal computer provided you do not modify the materials and that you retain all copyright notices contained in the materials. By downloading content from our website, you accept the terms of this agreement. Grandma One beautiful day in September, 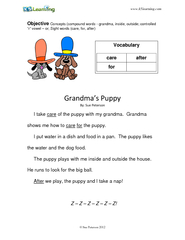 ObjectiveConcepts (compound words - grandma, inside, outside Moses 4 There is a good argument that Moses 4:1-4 was take Moses and the Exodus Moses and the Red Sea Crossing

Anna Mary Robinson was the 3rd of 10 children. Born on a farm, farming was her life until she could no longer do it due to age and arthritis. What little formal education she had was in a one room school house. At age 12 she left home and worked as a hired “girl” for wealthier people.

In 1887 when she was 27 she met Thomas Moses, a hired hand on the farm where she was doing the housework. They were married and had 10 children—5 of which died at childbirth.

The school house that Grandma Moses attended is now part of the Bennington Museum in Bennington, Vermont.

This is considered to be the first “painting” Grandma Moses did. It is called “Fireboard” and is displayed in the Bennington Museum today. She painted this because she ran out of wallpaper. To finish the room she put up white paper and painted this scene.

“On a farm the days are nearly all the same, nothing changes but the seasons. In the early morning, before the sun was up, I would dress and build the fire, and put on the tea kettle for hot water; go out to the hen house, feed and water the chickens, come in and get breakfast, calling all hands to the table. By this time, the men have finished the milking, and the horses have been curried and fed, ready for work. Coffee and hot cakes are all ready, now we have breakfast. Then for five to six hours in the field and in the house. Then a good dinner and back to work again until sundown., then supper and the milking; and….then bed till another day.” ….Grandma Moses

Born in 1860—the same year Abraham Lincoln was elected President.

This picture shows a winter landscape and a “sleigh ride.”

After Grandma Moses was married, she and her husband rented a farm near Staunton, Virginia. They stayed in Virginia for 20 years. While there, in addition to caring for the children and running the house, Mother Moses (as she was called then) made butter and potato chips and sold them to the neighbors.

They returned to New York and continued farming there. Mr. Moses died in 1927 and for several years Grandma Moses tried to operate the farm with the help of her son, Forrest.

She had to eventually give up farm chores and then her embroidery due to arthritis. Her embroidery pictures were based on scenes from old Currier and Ives calendar pictures as well as greeting cards.

These are images from Currier and Ives—one of the major influences of her art work. Currier and Ives were “publishers of cheap and popular prints” which included cards and calendars.

This is an original “worsted” picture made by Grandma Moses using yarns. It is in the Galerie St. Etienne in New York.

What is Folk Art?

Folk art is created by artists who haven’t had any art classes or any special training. She didn’t start painting until she could no longer do needlework—at age 76. All of her paintings were memories of things past—her long life as a farm child, hired girl and farmer’s wife. She called her paintings “old timey” New England landscapes.

Her first paintings were sent to a county fair along with samples of her raspberry and strawberry jam. Her jam won a ribbon but no one even noticed her paintings.

So how in the world did she become famous?

During her lifetime, Grandma Moses painted more than 1000 paintings, 25 of them after her 100

th birthday. The paintings had been in a local drug store for an art and craft exchange—actually for two years when an art collector named Louis Calder was driving through Hoosick Falls, noticed them—and bought them all! (They were priced between $3 and $5!) Not only did he buy the ones on display but he also drove to her home and bought ten others she had there.In 1940 her paintings were in a “one woman show” called “What a Farmwife Painted” in a gallery in New York. Art dealers had no problem with her art work—they really liked it. What they had a problem with was her age! They were afraid she was going to die soon or get sick and not be able to paint any more.

While the gallery exhibit was a modest success, her “stardom” came when a number of her paintings were displayed at

Department Store in New York for their Thanksgiving Festival. Grandma Moses went to

in New York with her daughter in law but she talked about her jams and jellies—NOT her paintings. The press fell in love with her. What happened next is unequalled in the “tales” of folk art. She became a superstar. She didn’t do it on purpose—it just happened!

As a self taught “folk artist” Grandma Moses started painting what she called “lambscapes” as a young girl and used the juice of grapes and lemons to get colors. Imagine her first paintings selling for $3 and within her lifetime, they were selling for $8,000-$10,000!

Birthday celebrations! When you turn 100 AND 101 there are lots of candles on your cake!

“I look back on my life like a good day’s work. It was done and I feel satisfied with it. I was happy and contented, I knew nothing better and made the best out of what life offered. And life is what we make it, always has been, always will be.”

.” Her ‘studio’ was her kitchen and her ‘easel’ was an old kitchen table! She was a tiny woman and sat on an old battered, swivel chair with two large pillows on it. She shared her “studio” with the electric washer and dryer! At night after dinner, she liked to watch Westerns---not for the drama but because she liked horses.

When Grandma Moses died at age 101, President Kennedy paid tribute to her work and her life.

Things to remember:Grandma Moses was born in 1860—the same year Abraham Lincoln was elected President.The inspiration for her paintings were her memories of her long life as a farm child, hired worker and farmer’s wife.She had no formal training as an artist. (Folk Art)She started painting at age 76 because her arthritis prevented her from doing needlework. She painted over 1000 pictures—25 of them after she was 100!She lived to be 101!She designed Hallmark cards, was the subject of books and a documentary film (the film was nominated for an academy award), received a Presidential award, was on a postage stamp, and the cover of two magazines!