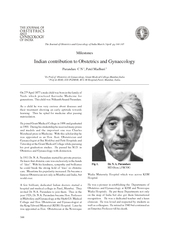 Department of Obstetrics and Gynaecology, HIMSR EBCOG European Board and College of Obstetrics and Gynaecolo

Download Pdf - The PPT/PDF document "MJAFI Vol No AFMS CASE REPORT Senio..." is the property of its rightful owner. Permission is granted to download and print the materials on this web site for personal, non-commercial use only, and to display it on your personal computer provided you do not modify the materials and that you retain all copyright notices contained in the materials. By downloading content from our website, you accept the terms of this agreement.

order of birth and was of average height compared to her siblings. A detailed history revealed that she was born with ambiguous genitalia for which medical help was taken by her parents at the age of four years. Medical records at that age revealed penoscrotal hypospadias, with length of phallus around 2.5 cm with no testis palpable in the inguinal region or groin. Investigations done 22 years back showed normal serum electrolytes and urinary 17-ketosteroids. Ultrasound and contrast-enhanced computed tomography (CECT) scan of whole abdomen revealed a small hypoplastic uterus with no evidence

of any intra-abdominal gonads. However, both kidneys and suprarenalÆs were normal. Barr body was present on the buccal mucosal smear and her karyotype revealed TurnersÆ syndrome with mosaic pattern (45 XO/XX). She sub- sequently underwent vaginoplasty with clitoroplasty at the age of 4.5 years and was raised as a female. At around the age of 13 years she was prescribed cyclic oes- trogen and progesterone. Though she had breast development, she continued to have amenorrhoea and stopped taking hor- mones after a few years. On examination, she was of average height and weight (height: 171 cm,

weight: 65 Kg, BMI: 22.23). However, she had male type of body contour (Figure 1). Hirsutism was evident and her Ferriman Gallwey score was 21. Breasts were devel- oped to TannerÆs stage III. Axillary hairs were present and pu- bic hairs were developed to TannerÆs stage IV. No lump was palpable on per abdominal examination and all hernial sites were free. Both the labia majora were seen, a 0.5 cm scar mark of previous surgery was visualised in between the labia anteri- orly (Figure 2). Urethra was present 1 cm below the scar of clitoroplasty on the anterior vaginal wall, and vagina was just an

which is the most difficult to diagnose and presents as a diagnostic dilemma. Although these patients have an XY karyotype, they present with ambiguous genitalia at birth, impaired spermatogenesis with otherwise normal testis, absent or rudimentary mullerian structures, normal or increased synthesis of testosterone, normal or increased synthesis of luteinising hormone by pituitary, or defective androgen binding activity of genital skin fibroblasts. The estimated incidence of complete androgen insensitivity syndrome (CAIS) is one in 20,400 XY births, while the incidence of PAIS is one in

130,000 births. We present a case of a 26-year-old, who was born with am- biguous genitalia and had undergone feminising genitoplasty at the age of four years. She was raised as a girl and presented to us with features of masculinisation. CASE REPORT The patient, a 26-year-old female, working as a sports teacher in a girlÆs school, presented to us in the outpatient department Page 2 MJAFI Vol 67 No 4 383  2011, AFMS Partial Androgen Insensitivity Syndrome: A Diagnostic and Therapeutic Dilemma gonads with fallopian tubes were visualised. However, the tubes were connected by a

fibrous band with a bulbous swelling on the left side which appeared like left rudimentary horn of the uterus (Figure 3). The histopathology report of the gonads was reviewed in the department of pathology, Base Hospital, Delhi Cantt. It revealed Leydig cell proliferation, atrophic seminifer ous tubules with no evidence of any ovarian tissue, hence, confirm- ing the gonads as testis (Figures 4 and 5). The tubular structure was confirmed as fallopian tubes on histopathology report. Hence, a diagnosis of PAIS was made. Her serum testosterone levels postoperatively at six weeks had fallen to 3.8

ng/dL. She has been advised hormone replacement therapy (HRT), and is on close follow-up till date. DISCUSSION Individuals with partial androgen insensitivity, unlike those with the complete or mild forms, present at birth with ambigu- ous genitalia, and the decision to raise the child as male or female is very difficult. They present with varying degrees of hypospadias, micropenis, bifid scrotum, with either descended or undescended testes, and gynaecomastia at puberty. It is transmitted as an X-linked trait and is related to the mutations in AR gene. Management of AIS includes sex

appearance of the genitalia, the extent to which the child can virilise at puberty, surgical options and the postoperative sexual function of the genitalia, 8¢10 genitoplasty complexity and the projected gender identity of the child. The majority of individuals with PAIS are raised as male. Genitoplasty, unlike gender assignment, can be irreversible, and there is no guarantee that adult gender identity will develop as assigned despite surgical intervention. 10 Points of consideration include what conditions justify genitoplasty, the extent and type of genitoplasty that should be employed, when

genitoplasty should be performed and what should be the goals of genitoplasty. 7,10 Though feminising genitoplasty typically requires fewer sur- geries to achieve an acceptable result and results in fewer uro- logic difficulties, there is no evidence that feminising surgery results in a better psychosocial outcome. 10 Procedures include clitoral reduction/recession, labiaplasty, repair of the common urogenital sinus, vaginoplasty, and vaginal dilation through non-surgical pressure methods. 7,10 The outcome of masculinising genitoplasty is dependent on the amount of erectile tissue and the

extent of hypospa- dias. Procedures include correction of penile curvature and chordee, reconstruction of the urethra, hypospadias correc- tion, orchidopexy, and mammoplasty after puberty for correc- tion of gynaecomastia. Gonadectomy at time of diagnosis is currently recommended for PAIS if presenting with cryptorchidism, due to the high (50%) risk of germ cell malignancy. Hormone replacement therapy is required after gonadectomy, and should be modu- lated over time to replicate the hormone levels naturally present in the body during the various stages of puberty. CONCLUSION The cases of

PAIS, present with ambiguous genitalia at birth and require detailed and deliberate evaluation to confirm their diagnosis. These children if reared as females as in our case, present with virilisation at the usual age of male puberty and have to be dealt with accordingly. Though majority of the workers believe that they should be raised as males, however, a multidisciplinary approach with