DownloadNote - The PPT/PDF document "1 Protest Procedures 2 Objectives" is the property of its rightful owner. Permission is granted to download and print the materials on this web site for personal, non-commercial use only, and to display it on your personal computer provided you do not modify the materials and that you retain all copyright notices contained in the materials. By downloading content from our website, you accept the terms of this agreement.

Discuss protests to the agency

Discuss protests to the GAO

Describe the process after the report is filed

“Protest” means a written objection by an interested party to any of the following:

Objection to cancellation of solicitation or other request

An award or proposed award of contract

Termination or cancellation of an award of contract

Exclusion from the “competitive range”

Covered in FAR Part 33 and supplements

Cancellation of a solicitation

Improper exclusion from the competitive range

Bias or bad faith on the party of the agency

The timeframe for filing a protest is

Although rare, a protest filed late can be heard by the GAO if it involves significant issues

Provide for inexpensive, informal, procedurally simple, and expeditious resolution of protests, in other words try to resolve at lowest level

Goals of the agency

Reduce protests to the GAO

after the protest is filed

Protest shall include the following information:

Name, address, and fax and telephone numbers of protester

Detailed statement of legal and factual grounds for the protest, to include a description of resulting prejudice to the protester

Request for a ruling by agency

Statement as to the form of relief requested

All information establishing the timeliness of the protest

after the basis of the protest is known or should have been known, (whichever is earlier)

Exception: protests challenging a procurement conducted on the basis of competitive proposals under which a debriefing is requested and, when requested, is required

Action to take upon receipt of protest:

Inform offerors whose offers might be eligible for award

A protest after award must be filed within 10 days after contract award, or within

after a debriefing date, whichever is later

CO shall immediately suspend performance or terminate the awarded contract

Best interest of the United States

When a protest is filed, the protester must notify the CO within

of filing with GAO

The Air Force response to a GAO bid protest must comply with GAO’s bid protest regulations (4 C.F.R. § 21), FAR and its respective supplements

of receiving the protest:

Forward a copy to the legal office

Provide a copy of the protest to the awardee, or if no award has been made, to all offerors who appear to have a reasonable prospect of receiving award

after receiving the protest:

Copy all applicable documents and forward to

after receiving the protest, consult with the cognizant legal office to determine:

Whether a stay of performance or award is required

If a stay is required, whether an override will be sought

If a stay is not required, whether a suspension of performance or termination of the contract is in the best interest of the Air Force

Whether corrective action should be taken

Whether summary dismissal should be requested

The CO should, within

after the Air Force receives the protest, provide the statement of facts and table of contents to the cognizant legal office

To request status or ask questions on protests pending at GAO

If there is an actual or imminent protest to GAO

CO should prepare complete copies of the agency report for

CO should submit copies of the agency report:

In a 3-ring binder (not contract folders)

Each binder should be labeled with protestor’s name, contract number and name of intended recipient

The table of contents should have

Documents should be numbered, tabbed and identified in the table of contents

Tab 1 should contain the legal memorandum

Tab 2 should contain the contracting officer’s statement of facts

Tab 3 should contain a copy of the protest

The cognizant legal office will prepare the legal memorandum, which will include a legal analysis of each ground of protest

Actual drafting is the CO’s responsibility

The statement of facts should be written in narrative form and contain three sections: overview of procurement, chronology of events and response to all allegations raised in the protest

First section contains a one paragraph overview of the procurement:

Description of goods or services being acquired

Description of the decision protested

Name of the successful contractor, if known

Amount of contract, as awarded with options

Second section provides a chronology of events that includes a date and a brief description of significant events in the procurement:

Date bids or proposals were originally due

Appropriate references to the FAR should also be made

References to documents contained elsewhere in the agency report should be followed by citations, including tab number and page number

Agency report should include, as appropriate:

Bid or proposal submitted by the protester

Abstract of bids or offers

CO should review all documents for proprietary or source selection information

Protected documents include, among other things:

Interim or final ratings of any offeror (including those contained in summary documents such as a competitive range determinations, source selection decision documents, or proposal assessment reports)

Past performance information of any offeror (including the protester)

GAO will usually issue a

in a protest involving protected information

When an attorney represents the protester, AFLSA/JACN will forward the protester’s copy of the agency report directly to the attorney

In the absence of a protective order, the contracting officer may include protected documents in agency reports or subsequent filings by

the material considered proprietary or source selection sensitive (In such cases, provide both original and redacted versions to SAF/AQCX (or AFLSA/JACNSAF/GCQ) and GAO)

after the AF is notified of the protest (or

from the date the express option is invoked by the GAO)

Transmit all copies of the agency report

One for the protester

One for the GAO

Comments on the agency report

of receiving the report

Based on the information contained in the agency report, the protester may assert supplemental grounds of protest

The agency has to implement the GAO’s decision within

of receiving the GAO’s decision

May be taken by the Air Force at any time

Is important to minimize costs to the Air Force

Check out prior protest decisions at:

Discuss protests to the agency

Discuss protests to the GAO

Describe the process after the report is filed 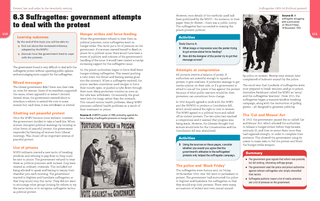 Protest, law and order in the twentieth century

Protest, law and order in the twentieth century