Download Pdf - The PPT/PDF document "Reflections on Womens Health continued o..." is the property of its rightful owner. Permission is granted to download and print the materials on this web site for personal, non-commercial use only, and to display it on your personal computer provided you do not modify the materials and that you retain all copyright notices contained in the materials. By downloading content from our website, you accept the terms of this agreement.

Page 1 Reflections on Women’s Health continued on p. 75 76  2013, AWHONN http://nwh.awhonn.org I’m going to be a grandmother! Technically, I’m going to be a grandmother again. As I write this, I’ve just found out that my daughter, Bran- dy, is pregnant. Four years ago, I received this same news. At that time, the news was accom- panied by the fact that she was having vagi- nal bleeding. She feared possible complications from the malaria pills and scuba diving excur- sion that had been a part of her recent vacation. I couldn’t celebrate the good news. I was para- lyzed by the

thought of a possible miscarriage. I didn’t shout it from the roo ops or update my social media status. As the pregnancy progressed and she passed certain milestones, I managed to relax a little and cautiously shared the news with family and friends. But there were no break- ing news moments. I kept it mostly under- cover. I was worried. However, as the months progressed, my original concern began to tran- sition to optimism. I was thrilled to learn that I was invited to the birth for the arrival of our rst grandchild. Although my concern about the pregnancy had eased, a new concern emerged. I

was worried that I wouldn’t be able to handle watching my daughter in pain. I worried that my knowledge of what could go wrong would be a burden to me. I worried that my expectations of the health care sta and my desire to advocate for Anxiously Awaiting JANICE E. HAWKINS, MSN, RN Page 2 Reflections on Women’s Health continued from p. 76 February March 2013 Nursing for Women’s Health 75 Janice E. Hawkins, MSN, RN, is a member of the nursing faculty at Old Dominion University in Norfolk, VA, where she serves as the chief aca- demic advisor and teaches in the undergraduate nursing

program. The author reports no conflicts of interest or relevant financial relationships. Address correspondence to: jhawkins@odu.edu. DOI: 10.1111/1751-486X.12012 my daughter might con ict with her desire to quietly be a “good” patient. Most importantly, I feared that I would not meet her expectations. Her impending motherhood was of particu- lar signi cance to our family. Because Brandy was adopted, I had never experienced the labor and delivery process with her. She was 7 years old when we adopted her. I’d never held her as a baby and didn’t even have pictures to cap- ture those lost years.

I had always thought that I would “see” Brandy as a baby when she had a baby of her own. Growing up, Brandy frequently expressed her desire to be a good parent. I think that she always felt the need to make up for the absence and shortcomings of her biological mother by becoming the mother that she had envisioned for herself. e arrival of this new baby prom- ised to heal many of the wounds from the past. To my surprise, when the day arrived I found that I was quite comfortable in the la- bor room and settled into my role as mom and grandmother-to-be rather than my usual role as labor and

delivery nurse. At one point, the as- signed nurse remarked that I was not the “usu- al” nurse family member in the delivery room. I suspect that her 20 years of experience and ob- vious competence allowed me to enjoy my fam- ily member role while she expertly ful lled the nursing role. roughout the day I provided reassurance and comfort. When it came time for Brandy to push, I assisted with coaching and encourage- ment. But the greatest joy for me was not de- rived from my participation in the birth events, but rather from my observations of them. If I hadn’t been present in the room, I would

nev- er have seen my son-in-law as he coached and comforted my daughter. I wouldn’t be aware of the amount of worry that he assumed on her behalf. Her pain clearly distressed him, but at the same time he seemed in awe of her ability to manage the labor pains. I watched his impa- tience when the doctor didn’t arrive in a timely manner and I watched him step up to advocate for his wife. is is even more remarkable con- sidering he’s an outsider to the medical commu- nity and these roles were completely new to him. e miracle of birth is never routine to me and I’m always in wonder when a new baby

ar- rives in the world. Of course, the arrival of my rst grandchild was no exception. But what was even more extraordinary to me was the joy of watching my daughter and her husband become a family. I watched the new parents beam with pride and amazement at their new son. I watched my daughter receive him in her arms as he was presented directly to her. en, I watched my son-in-law’s rst action as a new dad. He walked right up to the head of the bed and kissed his wife. He spent the rest of the day marveling over his new son. I suspect that he had no idea of the joy that he brought me when I

watched him kiss my daughter rst. At that moment, the world seemed in perfect order. I felt overwhelming hopefulness for the future of this family. And now, our family is growing again. is time around I’ve been able to (mostly) squelch the joy stealing e ects of worry and enjoy the an- ticipation of my next grandchild. I’m hoping that I’ll be invited to the birth again and that I’ll get to be there in person when the new baby arrives. As a labor and delivery nurse, I’ve witnessed the birth of countless babies and been a part of this intimate moment with many couples. But I’m not sure that I

can even nd the words to express the treasure that I hold from this mem- ory as being the grandmother in the delivery room. What was even more extraordinary to me was the joy of watching my daughter and her husband become a family PTA Reflections program What is reflections? 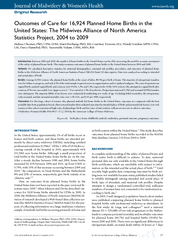 A FACT SHEET FROM THE OFFICE ON WOMENS HEALTH ww