Both can be found through out the state except on Marthas Vineyard and Nantucket They prefer landscapes of mixed habitat and thrive in areas where different habitats forests 64257elds orchards and brush lands blend together Foxes typically use the ID: 4747 Download Pdf

Download Pdf - The PPT/PDF document "Living With Wildlife Red Fox Gray Fox i..." is the property of its rightful owner. Permission is granted to download and print the materials on this web site for personal, non-commercial use only, and to display it on your personal computer provided you do not modify the materials and that you retain all copyright notices contained in the materials. By downloading content from our website, you accept the terms of this agreement. Both gray and red squirrels are common and PDF document 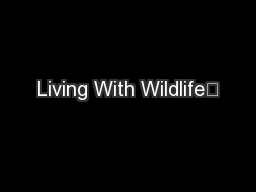