BushBarack Obama effort to spend 700 billion bailing out the US banks Heres the troubling part of the bank bailout story Other nations have followed in Americas footsteps with major and growing government involvement in their banking systems As a re ID: 62132 Download Pdf

Download Pdf - The PPT/PDF document "THE INTERNATIONAL ECONOMY WINTER he eco..." is the property of its rightful owner. Permission is granted to download and print the materials on this web site for personal, non-commercial use only, and to display it on your personal computer provided you do not modify the materials and that you retain all copyright notices contained in the materials. By downloading content from our website, you accept the terms of this agreement.

THE INTERNATIONAL ECONOMY WINTER 2010 he economics profession and most of the world investmentcommunity remain deeply divided over the long-term sig-nificance of the George W. Bush/Barack Obama effort tospend $700 billion bailing out the U.S. banks. Here’s thetroubling part of the bank bailout story: Other nations havefollowed in America’s footsteps, with major and growing governmentinvolvement in their banking systems. As a result of governments’growing presence in financial affairs, the world of banking will likelyToday we have a dollar-based global financial system dominated byroughly twenty-five government-subsidized international megabanks,with some of the biggest owned by China. These giant financial institu-tions control roughly $50 trillion in bank assets. That’s 60 percent of theworld’s total bank assets and today only five of these twenty-five mega-banks are American-owned, according to Leto Market Insight. We nowhave a global financial system largely controlled directly by non-U.S.banks and indirectly by their governments. What this means for the direc-When the history of this period is written, it is likely that BarackObama and George W. Bush will be lumped into the same category on thesubject of the U.S. banking bailout. Incredibly, both offered the big WallStreet banks $700 billion in taxpayer funding with no stipulation that thebanks actually lend the money, which for the most part they haven’t beenThe perception now is that Washington has entered a new era of “polit-ical banking.” Notwithstanding the demagoguery on bank bonuses, thewell-connected and the “large” receive all the breaks. The U.S. Treasurybailed out the banking sector so that it could start lending again. But the bigbanks aren’t lending; they have been buying securities as a means of FROM THEFOUNDER How Washington America’s economicfuture remains THE MAGAZINE OF INTERNATIONAL ECONOMIC POLICY888 16th Street, N.W., Suite 740Washington, D.C. 20006www.international-economy.com WINTER 2010 THE INTERNATIONAL ECONOMY ROMTHE bolstering their balance sheets and profiting from the steep-In other words, just like the Japanese banks in the 1990s,they can borrow from the central bank for next to nothing,because the large Wall Street banks have access to the Fed’sdiscount window for cheap loans. Even a high-risk firm likeGoldman Sachs now has access to the U.S. taxpayer safetynet via the Fed’s discount window. The banks use this bor-rowed capital to buy guaranteed government debt, taking thedifference in yields as riskless profit. There is a reason the U.S. banks haven’t been lending:Sure, they’ve been fearful of the weak economy, but theyalso don’t have to add to their reserves when they buy gov-to risky yet job-creating businesses in the private sector.While the U.S. banking industry’s current practice of buyingsecurities and curtailing lending may help repair bank bal-ance sheets, the situation has been detrimental to the U.S.economy.True, as an alternative to bank financing, America’s largecorporations have had access to a healthy corporate bond mar-ket. They sold more than $1 trillion in bonds in 2009, thefastest pace on record. But that has not been the case formedium- and small-sized companies and entrepreneurialstartup ventures, which have been credit-starved since the out-break of the financial crisis. President Obama has said thatthese smaller firms and startups are responsible for 70 per-cent of our economy’s net new jobs. Yet despite rhetorical lip-service, they are barely a blip on Washington’s radar screen,In October, a Japanese financial strategist visited myoffice in Washington and stunned me with this chicken-and-egg question: “Why didn’t the U.S. Treasury, when the healthybailed-out banks such as Goldman Sachs and J.P. Morganasked to return their TARP bailout money, insist that the banksfirst spend the next three years lending the TARP moneybefore returning it? Wouldn’t it have been better to save theeconomy first and then repair the bank balance sheets? Whywouldn’t American policymakers have learned from Japan’sOf course, the healthy banks returned the money pre-cisely because of the fear that if they kept the dough,Washington would question their bonus and salary structures.As a result, banks are lending the smallest portion of theirdeposits in fifteen years, and their bonuses are being ques-tioned anyway. And now, ironically, Washington wants to taxthose bonuses as a giant populist parade has begun to rolldown Main Street spurred by the anxiety of rising joblessnessIn a sense, America’s economic future remains uncertainthe banks. A year ago, leading bankers such as Chase’s JamieDimon and Goldman Sachs’s Lloyd Blankfein and othersmight have lost their jobs had Washington forced all banks toclean their balance sheets of their toxic assets, as was the U.S.Treasury’s original game plan. This would have been a riskyexercise, a chaotic period of deep uncertainty. There mighthave been blood on the floor. But the result would have beena leaner, cleaner banking sector far more amendable to lending.But the big cleanup never happened and, for the most part, nei-ther did efforts to create enhanced transparency in the securi-tized asset markets. The reason? Politically inspired timiditycarried the day. Banks used the excuse that they were too bigto fail. Yet banks that are too big to fail are simply too big.Before the outbreak of the financial crisis, the U.S. finan-U.S. corporate profits and 30 percent of the U.S. stock mar-ket’s value. This, of course, was an unsustainable situationthat made little sense. Today no one knows what will replacethis large hole in America’s GDP left by the shrinking of thefinancial services industry. No doubt that is one reason whyWashington seems unwilling to confront that industry in aneffective manner. Another reason is that bankers are politi-cally powerful. Today nearly one-fourth of the United StatesSenate sits on the Banking Committee, a committee whichIn the great stare-down with the bankers, our policy-makers lacked much courage. In the end, they blinked. Andthat’s the case with the tepid “musical chairs” version of finan-AVIDMr. Smick is founder, editor, and publisher The International Economy,The World Is Curved Today nearly one-fourth of a premier source of campaign dollars. Economics What is â€śEconomicsâ€ť PDF document 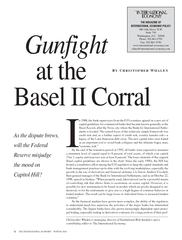 WHAT IS ECONOMICS? PDF document Arguing for post-growth economics in an era of austerity: equality, sustainability and human PDF document