JSangwinbhamacuk This article discusses moment planimeters which are mechanical devices with which is it possible to locate the centre of mass of an irregular plane shape by mec hanical and graphical methods They are a type of analogue computing dev ID: 22770

DownloadNote - The PPT/PDF document "Locating the centre of mass by mechanica..." is the property of its rightful owner. Permission is granted to download and print the materials on this web site for personal, non-commercial use only, and to display it on your personal computer provided you do not modify the materials and that you retain all copyright notices contained in the materials. By downloading content from our website, you accept the terms of this agreement. 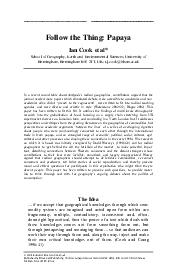 The Birmingham March for Science School of Sport and Exercise Sciences, University of Birming