Download Pdf - The PPT/PDF document "Work supported in part by US Department ..." is the property of its rightful owner. Permission is granted to download and print the materials on this web site for personal, non-commercial use only, and to display it on your personal computer provided you do not modify the materials and that you retain all copyright notices contained in the materials. By downloading content from our website, you accept the terms of this agreement.

rate up to 250 MHz , fast rise time 30 ps , square pulses are suitable for applications such as the excitation sequence in dynamic pump-probe experiments. Synchronization with the time structure of a synchrotron facility is possible as well as ﬁne control of the relative delay in steps of 10 ps. The pulse generator described here is used to excite magnetic nanostructures with current pulses. Having an excitation system which can match the high repetition rate of a synchrotron allows for utilization of the full x-ray ﬂux and is needed in experiments which require a large photon

ﬂux. The fast rise times allow for picosecond time resolution in pump-probe experiments. All pulse pattern parameters are conﬁgurable by software. I. INTRODUCTION Pump-probe-type experiments are frequently utilized to study subnanosecond phenomena in physical, chemical, and biological systems. 10 In such studies an excitation ōpump is applied to the system of interest and, after an adjustable time delay, a measurement ōprobe is per- formed. The pump is frequently an electrical, magnetic, or optical excitation, while the probe is often an ultrafast ab- sorption, scattering, or

resistance measurement which can be performed with a laser, x-ray source, or fast electronics. The probe signal as a function of time delay then yields informa- tion on the dynamics induced by the excitation. Typically, many such pump-probe cycles must be averaged in order to acquire sufﬁcient signal-to-noise ratio in the measurement. In this article, we describe instrumentation for the generation of electrical pulses for use in pump-probe experiments. The electronics was especially designed to meet the unique chal- lenges involved in the use of a synchrotron x-ray source as a probe.

Synchronization with such a source requires the ﬂexibility to accommodate the various operating modes of the synchrotron. For this reason, software conﬁgurability of the excitation pulse pattern was designed into our instrumen- tation. An example of an efﬁcient detection system speciﬁ- cally for x-ray absorption measurements is described in Ref. 11 . However, synchronizing the electrical pulses with other detection schemes, such as a laser or electrical probing sys- tem, is easily accommodated. II. PULSE PATTERN SYNCHRONIZATION In order to perform time-resolved

studies, synchroniza- tion with the synchrotron x-ray source is required. Electrons in a synchrotron make a regular orbit around the storage ring, typically within 1 s. Within this orbit electron bunches can be ﬁlled in regularly spaced 2ns ōbuckets.ö The electron bunches generate x-ray pulses. The speciﬁc ﬁlling pattern can vary signiﬁcantly for different modes of operation. Thus, the challenge for a pump-probe experiment is not only to exactly synchronize to these bunches with a well-deﬁned phase but also to have a ōﬁllingö pattern of pulses which

matches the ﬁlling pattern of the storage ring. One way to accomplish this is to conduct experiments in a low ﬁlling mode of the synchrotron or to gate x-ray bunches without a corresponding electrical pulse. 12 13 However, a design is de- sired which allows efﬁcient use of all x-ray bunches and which can accommodate many modes of operation. Note that this ability to match arbitrary synchrotron patterns adds sig- niﬁcant ﬂexibility to the pulse generator and allows one to use detection schemes other than x rays. III. INSTRUMENTATION The instrumentation

described here provides a way to generate software-deﬁned pulse patterns that can be synchro- nized and matched exactly to the bunch structure of a syn- chrotron. The primary features of the system described here are fast rise times of 30 ps and low jitter in the excita- tion pulse in order to achieve the best time resolution, precise synchronization of the excitations with various detec- tion schemes, high repetition rate up to 250 MHz, and pulse conﬁgurability amplitude, pattern shape, delay, etc. in order to accommodate the relaxation time of the sample or the time structure

of the probe system. Figure gives an overview of the system. To increase ﬂexibility we use a ﬁeld programmable gate array FPGA August 2007 SLAC-PUB-12773 Submitted to Rev.Sci.Instrum. Page 2 for pulse pattern generation and synchronization to the syn- chrotron and special hardware to implement the ﬁner time control 10 ps . TCP/IP is used to communicate from a graphical user interface GUI front end to the pulse conﬁgu- ration system on the FPGA. The particular x-ray photon counting system used in our experiment is described elsewhere, 11 but it is worth

noting that clock signals are shared between the excitation and detection hardware, and the relative phase delay is then adjusted in the excitation hardware to put the two systems in synchronization. The FPGA used is an Altera Stratix-2 which can implement a resident soft core processor. This processor runs a real time operating system eCOS which is used to communicate with the GUI through TCP/IP and gives access to the random access memory RAM banks for generating patterns. An arbitrary pulse pattern is simply a sequence of 1Æs and 0Æs designating pulser on and off, respectively, generated at

the bucket frequency in our case 500 MHz . This pulse pattern is represented in the RAM of the FPGA as a sequence of 8 bit words. For generating the pulses, the RAM is ad- FIG. 2. Color online Schematic of pulse generating hardware. Signals from FPGA are shown in gray. The bit stream from the FPGA is resampled by a D-Flipﬂop to the 500 MHz bunch frequency to improve the timing jitter. After that, the signal is delayed by two delay generators. Delay generator 1 deﬁn es the start time of the pulse, whereas delay generator 2 determines its end time. All parts except for the

associated with a speciﬁc buck et number of the synchrotron source. The 8 bit data output of the RAM is serialized to generate a bit stream indicating on which bucket a pulse is generated. The output of the serializer is used to trigger the pulse shaping board where a well deﬁned pulse is formed. Additional ampliﬁcation provides the amplitud required for the experiment. Page 3 dressed by a counter which is incremented at the bunch fre- quency of 500 MHz divided by 8 and reset at the orbit fre- quency of the synchrotron. Therefore, each bit of the RAM corresponds

to a particular bucket of the storage ring. The data output from the RAM is serialized into a bit stream. The pulse shaping circuit described below transforms this bit stream into pulses of the proper width, start delay, and am- plitude. Figure shows a schematic detailing the pulse shap- ing circuit. In order to meet our strict timing requirements, this hardware has been developed using high performance silicon germanium devices made by ON Semiconductor as part of their GigaComm part family. Generating pulses from the bit stream works in the fol- lowing way: the bit stream from the FPGA is

ac coupled and ampliﬁed by a bipolar ampliﬁer Pico- second Pulse Labs, model 5865 . Nonlinearities of the am- pliﬁer lead to steepening of the pulses. The gain of the am- pliﬁer is tuneable with an output voltage of maximum 4 V. IV. RESULTS AND BIPOLAR PULSES Figure shows resulting wave forms delivered from the pulse generating hardware for various controllable pulse widths. Pulse width and start delay are adjustable in 10 ps steps, allowing very ﬁne control for time-resolved studies. The wave form at the output of the ampliﬁer has a rise time of 100

ps. Since this will ultimately set the limit in the time resolution for a pump-probe study, it is desirable to improve this rise time. This can be done with a nonlinear transmission line e.g., Picosecond Pulse Labs, Part 7003 which introduces a voltage-dependent group delay. These de- vices perform best when operated with a forward bias current 5¢10 mA . A rise time of 30 ps was attained, as shown in the inset in Fig. . The rise time is deﬁned as the transition FIG. 4. Color online Schematic showing conﬁguration for generating bipolar pulse patterns. Two pulse shaping boards are

used. Along one path bottom the pulse is inverted. Along the other path top the pulse is compressed through a nonlinear transmission line. Pulses are combined in a resistive rf power splitter. FIG. 3. Color online Resulting wave form output from the pulse generator for pulses of width 1, 2, 4, 6, and 8 ns. Inset shows the rising edge of the pulse. Page 4 time between 20% and 80%. We have also found that cas- cading two nonlinear transmission lines can reduce the rise time to 20 ps. Figure shows how to generate a high repetition rate pulse train of positive and negative pulses as used

in Fig. ACKNOWLEDGMENTS This work was carried out at the Advanced Light Source ALS and was supported by the Ofﬁce of Basic Energy Sciences, of the U.S. Department of Energy ALS and SSRL , and by the National Science Foundation under Grant No. DMR-0203835. One of the authors J.P.S. acknowl- edges support from an ALS doctoral fellowship. The authors would like to thank H. Stoll and B. Van Waeyenberge for providing the detector for the STXM measurements and for fruitful discussions. The authors thank Altera, Inc. for pro- viding the development tools through the Altera university program. 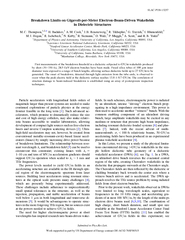 Work supported in part by US Department of Energy cont