RIDERS TO THE SEA. Synge, Women and Love . [link]. by . Ann . Saddlemyer. Throughout his life Synge was surrounded by women – brought up by his mother (who became the model for old . Maurya. ) and grandmother, living next door to his only sister, his closest playmate a cousin with whom he experienced the first childish flush of passion and rejection, his mother’s houseguests a series of dedicated women missionaries. His first marriage proposal was refused by Cherrie Matheson, a member of the Plymouth Brethren who lived just three doors . 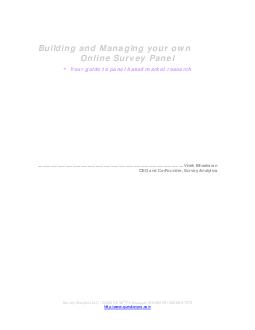 Building and Managing your own Online Survey Panel - Your g - pdf Holidaymakers to the Aran Islands - presentation

August 2011. Where did they come from?. Dublin. Galway. Clare. Italy. US. France. Germany. UK. Type of Trip to the Islands. Overseas . 78% decided to visit the islands before arriving in the area. 88% on first visit to the islands.