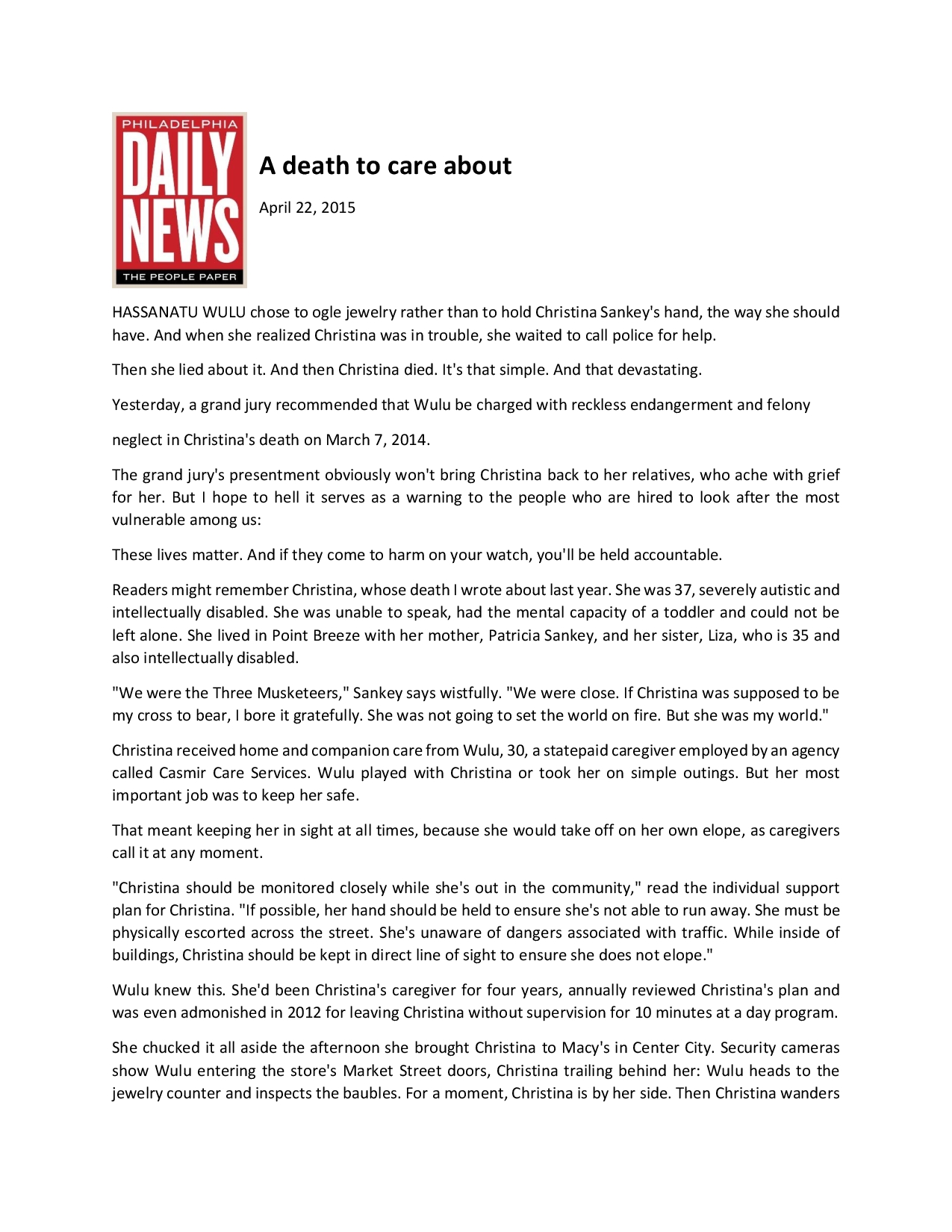 A death to car

Document on Subject : "A death to car"— Transcript:

1 A death to car e about April 22 , 2 0
A death to car e about April 22 , 2 01 5 HASSANATU WULU chose to ogle jewelry rather than to hold Christina Sankey's hand, the way she should have. And when she realized Christina was in trouble, she waited to call police for help. Then she lied about it. And then Christina died. It's that simple. And that devastating. Yesterday, a grand jury recommended that Wulu be charged with reckless endangerment and felony neglect in Christina's death on March 7, 2014. The grand jury's presentment obviously won't bring Christina back to her relatives, who ache with grief for her. But I hope to hell it serves as a warning to the people who are hired to look after the most vulnerable among us: These lives matter. And if they come to harm on your watch, you'll be held accountable. Readers might remember Christina, whos e death I wrote about last year. She was 37, severely autistic and intellectually disabled. She was unable to speak, had the mental capacity of a toddler and could not be left alone. She lived in Point Breeze with her mother, Patricia Sankey, and her siste r, Liza, who is 35 and also intellectually disabled. "We were the Three Musketeers," Sankey says wistfully. "We were close. If Christina was supposed to be my cross to bear, I bore it gratefully. She was not going to set the world on fire. But she was my w orld." Christina received home and companion care from Wulu, 30, a statepaid caregiver employed by an agency called Casmir Care Services. Wulu played with Christina or took her on simple outings. But her most important job was to keep her safe. That meant keeping her in sight at all times, because she would take off on her own elope, as caregivers call it at any moment. "Christina should be monitored closely while she's out in the c ommunity," read the individual support plan for Christina. "If possible, her hand should be held to ensure she's not able to run away. She must be physically escorted across the street. She's unaware of dangers associated with traffic. While inside of build ings, Christina should be kept in direct line of sight to ensure she does not elope." Wulu knew this. She'd been Christina's caregiver for four years, annually reviewed Christina's plan and was even admonished in 2012 for leaving Christina without supervis ion for 10 minutes at a day program. She chucked it all aside the afternoon she brought Christina to Macy's in Center City. Security cameras show Wulu entering the store's Market Street doors, Christina trailing behind her: Wulu heads to the j ewelry counte r and inspects the baubles. For a moment, Christina is by her side. Then Christina wanders off and returns twice before leaving for good. Within minutes, she ex

2 its onto Chestnut Street, heads west
its onto Chestnut Street, heads west to Broad and nearly gets hit by a car before disappearing f orever. When Wulu noticed that Christina was gone, she didn't immediately call 911, as she had been trained to do in such a situation. Instead, she asked Macy's security for help to find her "friend." Fortyfive minutes pass before she lets a store security officer know that Christina is di sabled and that she is her caregiver. A storewide bulletin is issued and a search of Macy's begins useless because, by now, Christina is gone. Not until Christina is missing for an hour does Wulu call police. She tells the responding officer that she'd arr ived at the store at 3 p.m. Only later does he learn she'd actually arrived at 2:20 p.m. "That information could have been very helpful in the beginning part," the officer told the grand jury, "because we could have known [from video] that she had left the store already." Christina's body was found the next morning, 5 miles away in West Philly, slumped between two cars. She had frozen to death. N o one knows how she got there, because she was unable to use public transportation on her own. If Wulu had momentarily lost track of Christina and had immediately called 911, there is a chance Christina would've been found. But if Christina had perished an yway, it's doubtful that the grand jury would've recommended criminal charges. Because sometimes tragic mistakes happen. An attorney for Casmir Care Services didn't comment about the presentment or about Wulu (for whom an arrest warrant has been issued). B ut attorney Tom Kline, who represents the Sankey family, was eager to talk about this horrible case. "We're grateful for the patient and diligent followthrough that led to this presentment," said Kline, who has already settled a civil suit brought by the S ankey family against Casmir. "This was not a case of distraction; this was a case of notorious neglect by a caretaker who had an obligation to assure Christina's safety. The exact opposite occurred. There must be consequences for that." My story about Chri stina last year was headlined "The Death No One Cares About," because her passing didn't seem to matter to anyone in an official capacity. I wrote it because I feared that Christina's heartbroken mom was right: Because Christina was poor, disabled, oddly behaved and terribly vulnerable, no one thought to consider that the circumstances of her death might be suspicious. First Assistant District Attorney Ed McCann read the story and was concerned enough to investigate. On behalf of Christina's family, I thank McCann for that. All they ever wanted was for Christina's life to be considered worthy enough for its end to deserve scrutiny

Death and Destination The statistics of death are staggering:

1 out of 1 people die. It is . inescapable . 2Co . 5:1-4 For we know that if our earthly house of this . tabernacle/. hut . were . dissolved/. demolished, . we have a building of God, an house not made with hands, eternal in the heavens. (2) For in this we groan, earnestly desiring to be clothed upon with our house which is from heaven: (3) If so be that being clothed we shall not be found naked. (4) For we that are in this .

Death: Meaning, Manner, . Mechanism, Cause, and Time . By the end of this chapter you will be able to:. . Discuss the definition of death. Distinguish between four manners of death: natural, accidental, suicidal, and homicidal.

- postmortem investigation of sudden or unexpected death or

Forensic Pathology. Role of the Forensic Pathologist. 4 broad determinations to be made:. Cause of Death – medical diagnosis denoting disease or injury. Mechanism of Death – altered physiology by which disease/injury produces death (arrhythmia, exsanguination).

A solution to a puzzle about the badness of death

William Ferraiolo . As early as Thales, philosophers have argued that death is nothing to fear because the dead no longer exist and, therefore, cannot suffer or be harmed.. . If death is a misfortune at all, it falls into a class of misfortunes that can only be suffered by those who have received a prior unearned benefit..

& . INDEMNITY BENEFIT. (AIB). STATE LIFE. INSURANCE CORPORATION OF PAKISTAN. ACCIDENTAL DEATH AND. INDEMNITY BENEFIT (AIB). This is a contract attached with a main contract of life insurance policy and provides coverage of accidental injury and death benefit to the holder of this contract. All the persons who have the following characteristics can take this rider:.

Lead Bubba. April 27 . –April 30. , 2017. We are looking forward to a wonderful time and seeing this amazing country, eating some good food, and being with our HOG family.. If anyone has any questions don.

Kathleen Springer. What Does it mean to say God is Dead?. Popular understanding:. God does not exist and never existed: atheism. Death of God Theology Sources:. Hegel: The death of God as Jesus is essential for the birth of the Holy Spirit. The Holy Spirit is fully manifest as Absolute Spirit, when human consciousness becomes fully free..

Kerry . Evens. . RN, BSN, CFRN, CEN. Chief Flight Nurse. North Colorado Med . Evac. How Do you Say IT??. American Cultural Bias. Death is the Enemy:. “When someone is born we rejoice. When someone is married, we celebrate. But when someone dies, we pretend nothing happened”.