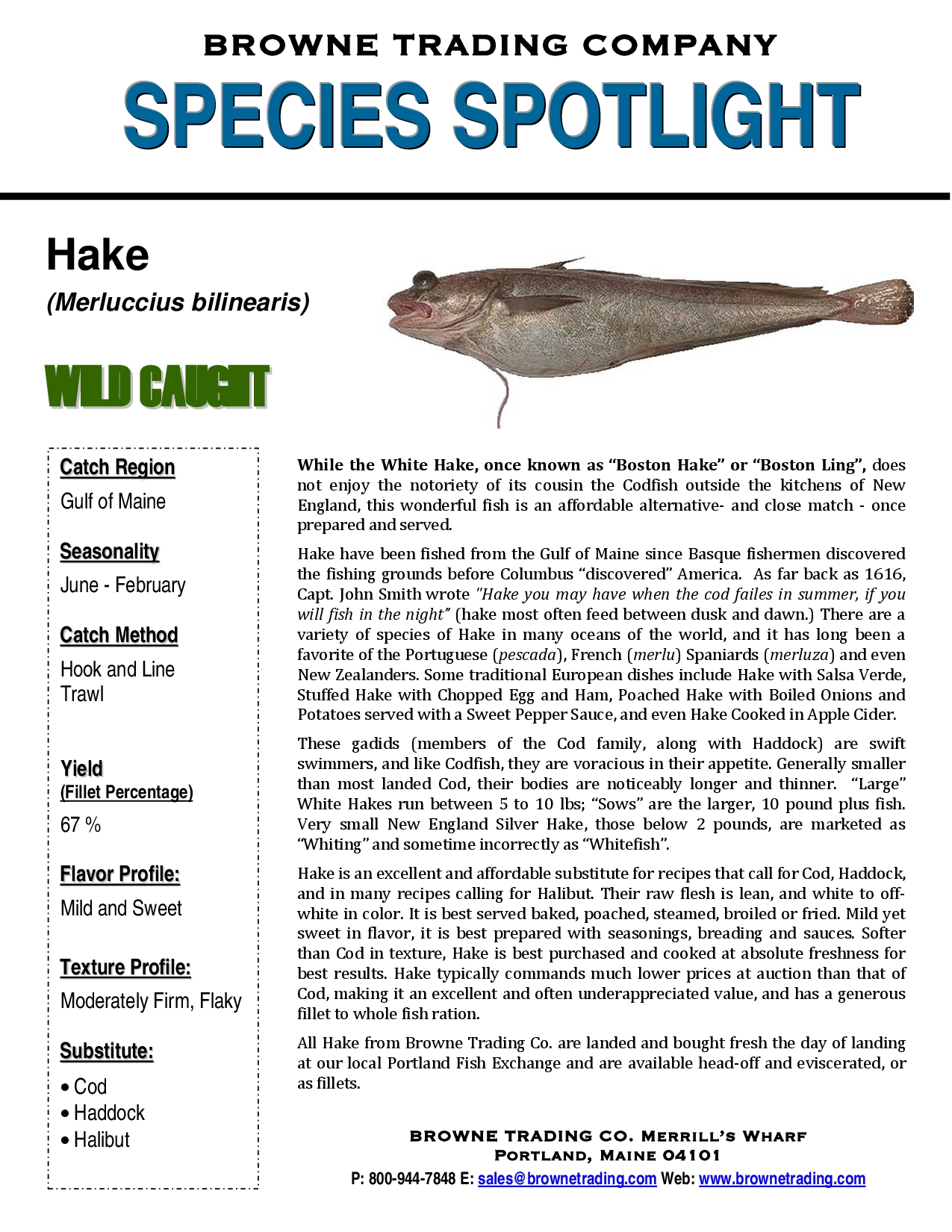 By JAMES and E

1 CCaattcchh RReeggiioonn Gulf of Main
CCaattcchh RReeggiioonn Gulf of Maine SSeeaassoonnaalliittyy June February CCaattcchh MMeetthhoodd Hook and Line Trawl (Fillet Percentage) 67 % FFllaavvoorr PPrrooffiillee:: Mild and Sweet TTeexxttuurree PPrrooffiillee:: Moderately Firm, Flaky S CodHaddockHalibut BROWNE TRADING COMPANY SSSPPPEEECCCIIIEEESSS SSSPPPOOOTTTLLLI While the White Hake, once known as “Boston Hake” or “Boston Ling”, does not enjoy the notoriety of its cousin the Codfish outside the kitchens of New Hake have been fished fromthe Gulf of Maine since Basque fishermen discovered the fishing grounds before Columbus “discovered” America. As far back as 1616, Capt. John Smithwrote "Hake you may have when the cod failes in summer, if you will fish in the night”(hake most often feed between dusk and dawn.) There are a variety of species of Hake in many oceans of the world, and it has long been a favorite of the Portuguese (pescada), French (merlu) Spaniards (merluza) and even New Zealanders. Some traditional European dishes include Hake with Salsa Verde, Stuffed Hake with Chopped Egg and Ham, Poached Hake with Boiled Onions and These gadids (members of the Cod family, along with Haddock) are swift swimmers, and like Codfish, they are voracious in their appetite. Generally smaller than most landed Cod, their bodies are noticeably longer and thinner. “Large” White Hakes run between 5 to 10 lbs; “Sows” are the larger, 10 pound plus fish. Very small New England Silver Hake, those below 2 pounds, are marketed as “Whiting” and sometime incorrectly as “Whitefish”. Hake is an excellent and affordable substitute for recipes that call for Cod, Haddock, and in many recipes calling for Halibut. Their raw flesh is lean, and white to offwhite in color. It is best served baked, poached, steamed, broiled or fried. Mild yet sweet in flavor, it is best prepared with seasonings, breading and sauces. Softer than Cod in texture, Hake is best purchased and cooked at absolute freshness for Cod, making it an excellent and often underappreciated value, and has a generous fillet to whole fish ration. All Hake from Browne Trading Co. are landed and bought fresh the day of landing at our local Portland Fish Exchange and are available head - off and eviscerated, or as fillets. Hake (Merluccius bilinearis) WWII BROW NE TRADING CO. Merrill’s Wharf Portland, Maine 04101 P: 8009447848 E: sales@brownetrading.com Web: www.brownetrading.com