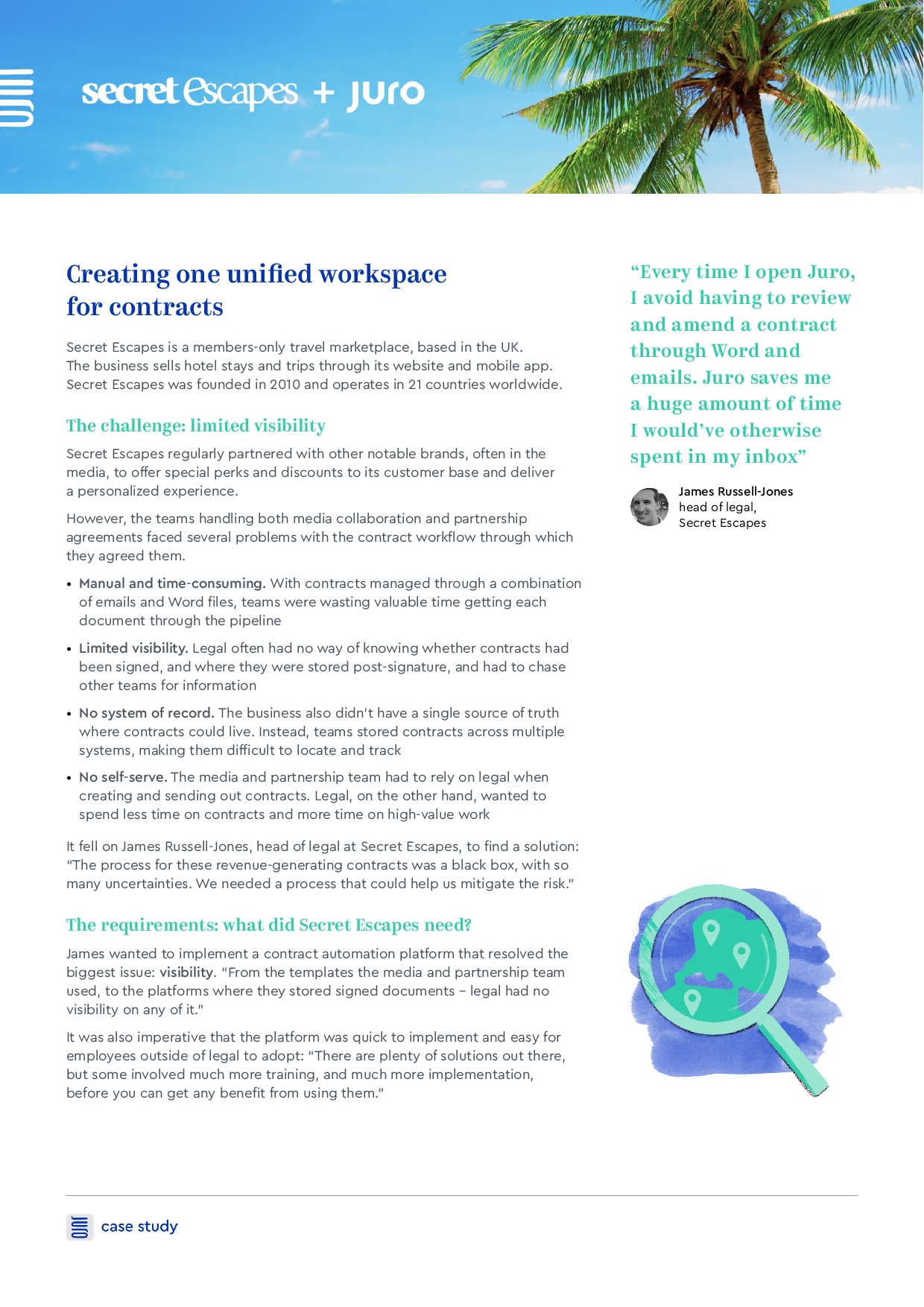 Creating one uni31ed workspace for contractsSecret Escapes is a member

Your Hallard PressIndie Author Advantages Your own individual Autho

FOR THE BEREAVED THEIR WELL

Document on Subject : "Creating one uni31ed workspace for contractsSecret Escapes is a member"— Transcript:

1 Creating one unied workspace for co
Creating one unied workspace for contractsSecret Escapes is a members-only travel marketplace, based in the UK. The business sells hotel stays and trips through its website and mobile app. Secret Escapes was founded in 2010 and operates in 21 countries worldwide.The challenge: limited visibilitySecret Escapes regularly partnered with other notable brands, often in the media, to offer special perks and discounts to its customer base and deliver a personalized experience.However, the teams handling both media collaboration and partnership agreements faced several problems with the contract workow through which they agreed them.Manual and time-consuming. With contracts managed through a combination of emails and Word les, teams were wasting valuable time getting each document through the pipelineLimited visibility. Legal often had no way of knowing whether contracts had been signed, and where they were stored post-signature, and had to chase other teams for informationNo system of record. The business also didn’t have a single source of truth where contracts could live. Instead, teams stored contracts across multiple systems, making them difcult to locate and trackNo self-serve. The media and partnership team had to rely on legal when creating and sending out contracts. Legal, on the other hand, wanted to spend less time on contracts and more time on high-value workIt fell on James Russell-Jones, head of legal at Secret Escapes, to nd a solution: “The process for these revenue-generating contracts was a black box, with so many uncertainties. We needed a process that could help us mitigate the risk.”The requirements: what did Secret Escapes need?James wanted to implement a contract automation platform that resolved the . “From the templates the media and partnership team used, to the platforms where they stored signed documents – legal had no visibility on any of it.”It was also imperative that the platform was quick to implement and easy for employees outside of legal to adopt: “There are plenty of solutions out there, but some involved much more training, and much more implementation, before you can get any benet from using them.” “Every time I open Juro, I avoid having to review and amend a contract through Word and emails. Juro saves me a huge amount of time I would’ve otherwise spent in my inbox”James Russell-Joneshead of legal, Secret Escapes About JuroJuro is the all-in-one contract automation platform that empowers legal and business teams to work with contracts together in one unied workspace. Juro is backed by Union Square Ventures, Point Nine Capital, Seedcamp and the founders of TransferWise, Gumtree and Indeed. Juro’s customer base includes Deliveroo, Secret Escapes and Reach plc.www.juro.com | hello@juro.com “One of my colleagues and felt condent agreements in Juro himself. Those were 20 agreements the legal team didn’t have to draft

2 ” The solution: frictionless,
” The solution: frictionless, exible, searchableJames and his team decided to implement Juro in 2018. Juro’s implementation specialists trained Secret Escapes’ teams and set up contract templates, and the business was using the platform to automate contracts within a week.FASTER CONTRACT TURNAROUND: “Every time I open Juro, I avoid having to review and amend a contract through Word and emails. I can focus on tackling the issue straight away. Juro saves me a huge amount of time I would’ve otherwise spent in my inbox.”CONTRACTS LIVE IN ONE PLACE: “We’ve been using Juro as a contract database, and uploaded around 150 signed documents through Juro’s Contract Reader feature.” This means contracts exist in a unied workspace, and legal no longer has to waste time digging around for static les. BETTER DATA VISIBILITY: Legal can track contracts throughout the lifecycle, from creation to signature and beyond – thanks to Juro’s exible data layer. “We have better insights into what’s in our contracts, and we’ve started tagging our PDF les, so everything is searchable.” SELF-SERVE AT SCALE: With the right safeguards in place, anyone in the business can self-serve on routine contracts. “One of my colleagues needed 20 contracts, and he felt condent working in Juro, creating these agreements from a set template and adding in the relevant information from smartelds himself. Those were 20 agreements the legal team didn’t have to draft.”The results: all-in-one contract automationBefore Juro, Secret Escapes handled contracts through a manual, unscalable process, involving multiple systems and limited visibility. Through Juro, James created a unied workspace for contracts, where the media and partnership team can self-serve on routine contracts. Legal now has complete visibility over the end-to-end process – with searchable documents, both static PDFs and Juro contracts, living in a unied workspace. This meant James never had to worry about chasing teams for contract information. “I would absolutely recommend Juro. We know whether our contracts have been signed, and we know where they’re stored for future reference. It’s incredibly helpful when it comes to due diligence exercises in the future, and mitigates the risk for us – it’s hard to put a price on how important that is.” Juro for legal: contract automation for visionary GCs “30 per cent of the legal function’s time is won back through not having to do low-value tasks”Head of Legal, RVUSelf-serve contractsEnable business colleagues to create contracts effortlessly without leaving the browser.No-code work�ow builderCreate frictionless approval workow with a drag-and-drop builder anyone can use.Data-rich repositoryGet instant access to contract data, thanks to a exible data layer pre- and post-signature

Creating one uni31ed workspace for contractsSecret Escapes is a member

Escapes from Custody and Violence:

– Director of the Chronic Poverty Network at ODI. THE ROAD TO ZERO: THE CHRONIC POVERTY REPORT. The Zero Poverty Tripod. STOPPING IMPOVERISHMENT. Poverty transitions – escapes and descents into .

Setting Up Your Personal BIT116 Workspace

On a usb thumb . drive, laptop, or Home Computer. INSTRUCTIONS. Setting Up Your BIT116 Workspace. On a USB THUMB DRIVE or a LAPTOP. Open your . USB thumb drive . or . laptop. and create a new folder called .

Type in the following to view this presentation!

Creating a Path to the Future