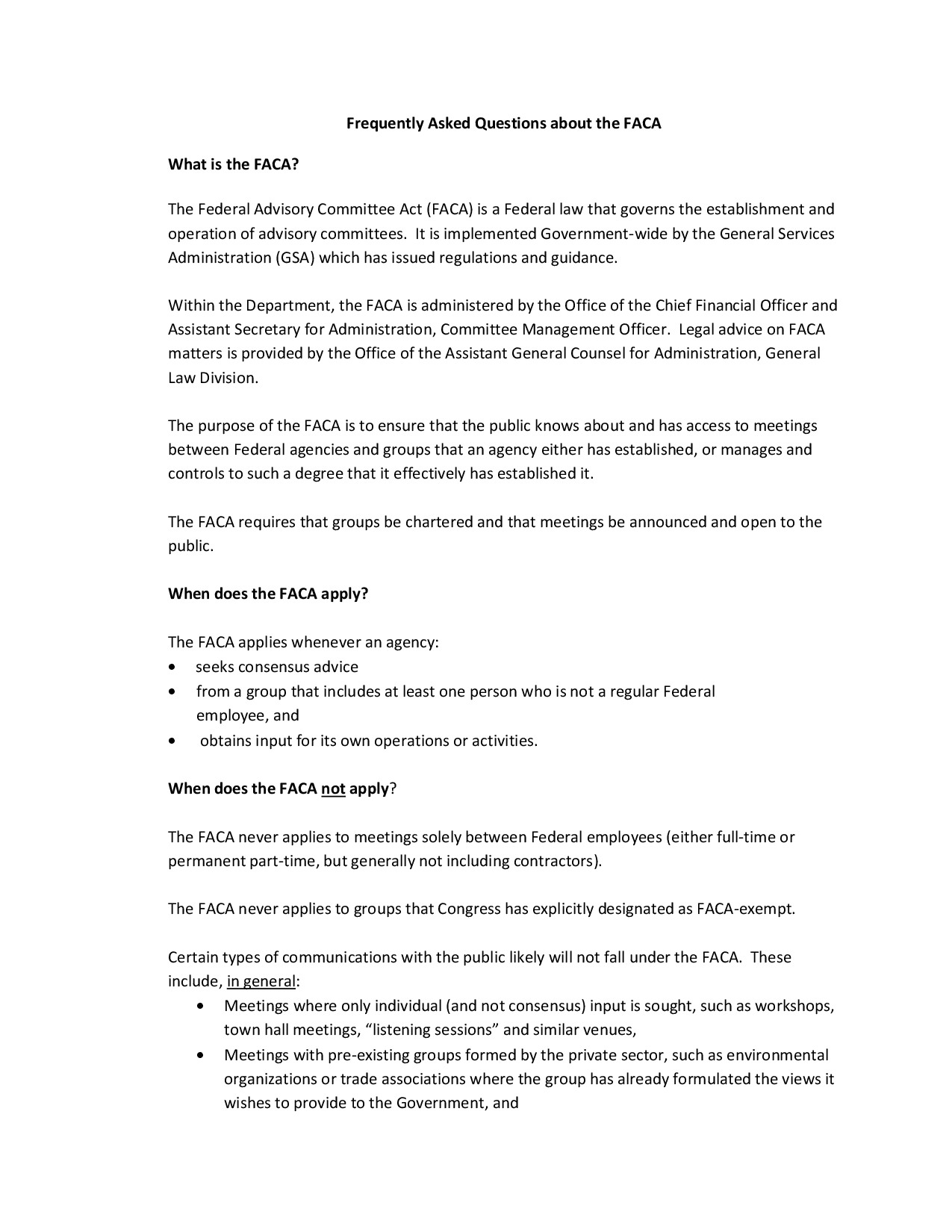 Frequently Asked Questions about the FACAWhat is theFACAThe Federal Ad

This is a multipurpose form for use if you

1 Frequently Asked Questions about the FAC
Frequently Asked Questions about the FACAWhat is theFACAThe Federal Advisory Committee Act (FACA) is a Federal law that governs the establishment and operation of advisory committees. It is implemented Governmentwide by the General Services en does the FACA notapply eetings where only individual (and not consensus) input is sought, such as workshops, town hall meetings, “listening sessions” and similar venues Meetings where the Government is either giving its views to the private sector, or is assisting the private sector in developing guidance for itself. Under the Unfunded Mandates Reform Act, theFACA does not apply to meetings between Federal officials andelected officials of state, local, or tribal governments or their designeeswhere the participants discuss matters of explicitly or inherently intergovernmental administration or responsibility. Other exceptions may apply. Before applyi

2 ng anyexception, you should discuss your
ng anyexception, you should discuss your particular situation with an attorney at the General Law Division by calling (202) 4825391. How long does it take to establish a committee under the FACA?The time period for establishing a committee may vary depending on whether the committee is called for by statute, Presidential direction, or the Secretary’s authority.Other time determinants include agency resources and commitment to establishing the committee. Generally, three months is optimal.What is the risk of ignoring the FACA?Obtaining advice in violation of the FACA may result in any combination of the following:a lawsuit where the judge ordersthe agency to disregard the committee’s advice,a lawsuit where a judge orders the agency to hold no more meetings until the FACA is followed,adverse publicity about the work of the committee, and damage to the agency’s ability to perform its mission

Frequently Asked Questions about the FACAWhat is theFACAThe Federal Ad

Frequently Asked Question 1.1What Factors Determine Earth’s Climate? The climate system is a complex, interactive system consisting of the atmosphere, land surface, snow and ice, oceans and other

Frequently Asked Question 6.1Changes Before the Industrial Era? Climate on Earth has changed on all time scales, including long before human activity could have played a role. Great progress has been

Frequently Asked Question 4.1Is the Amount of Snow and Ice on the Earth Decreasing? coastal regions of Greenland and West Antarctica in response to increased ice outow and increased Greenland surface