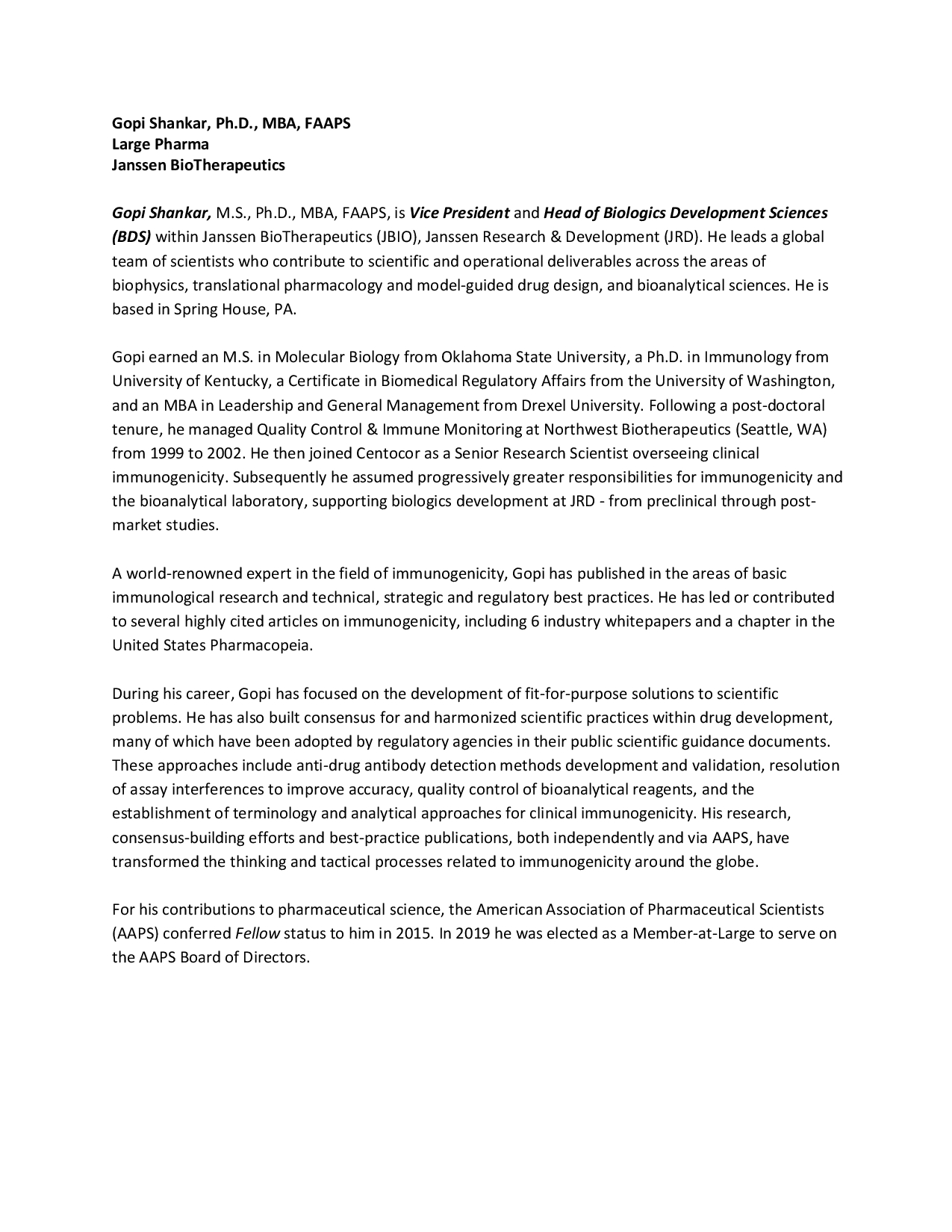 1 Gopi Shankar , Ph.D., MBA, FAAPS Large
Gopi Shankar , Ph.D., MBA, FAAPS Large Pharma Janssen BioTherapeutics Gopi Shankar, M.S., Ph.D., MBA, FAAPS, is Vice President and Head of Biologics Development Sciences (BDS) within Janssen BioTherapeutics (JBIO), Janssen Research & Development (JRD) . He leads a global team of scientists who contribute to scientific and operational deliverables across the areas of biophysics, translational pharmacology and model - guided drug design, and bioanalytical science s . He is based in Spring House, PA. Gopi earned an M.S. in Molecular Biology from Oklahoma State University, a Ph.D. in Immunology from University of Kentucky, a Certificate in Biomedical Regulatory Affairs from the University of Washington, and an MBA i n Leadership and General Management from Drexel University. Following a post - doctoral tenure, he managed Quality Control & Immune Monitoring at Northwest Biotherapeutics (Seattle, WA) from 1999 to 2002. He then joined Centocor as a Senior Research Scientis t overseeing clinical immunogenicity . Subsequently he assumed progressively greater responsibilities for immunogenicity and the b ioanalytical l aboratory, supporting biologics development at JRD - from preclinical through post - market studies. A world - renowned expert in the field of immunogenicity, Gopi has published in the areas of basic immunological research and technical, strategic and regulatory best practices. He has led or contributed to s everal highly cited articles on immunogenicity, including 6 industry whitepapers and a chapter in the United States Pharmacopeia. During his career , Gopi has focused on the development of fit - for - purpose s olutions to scientific problems . He has also buil t consensus for and harmonized scientific practices within drug development , many of which have been adopted by regulatory agencies in their public scientific guidance documents. These approaches include anti - drug antibody detection methods development and validation, resolution of assay interferences to improve accuracy, quality control of bioanalytical reagents, and the establishment of terminology and analytical approaches for clinical immunogenicity. His research, consensus - building efforts and best - pra ctice publications, both independently and via AAPS, have transformed the thinking and tactical processes related to immunogenicity around the globe. For his contributions to pharmaceutical science, the American Association of Pharmaceutical Scientists ( AAPS ) conferred Fellow status to him in 2015. In 2019 he was elected as a Member - at - Large to serve on the AAPS Board of Directors.

Gopi is a word of S

Chapter 8. Ravi Shankar (1920-2012). Focal figure of this chapter . Master of the . sitar. , master performer of . Hindustani raga. Passed away shortly after the textbook was published. Chapter centers on his “global .

Chapter 8. Ravi Shankar (1920-2012). Focal figure of this chapter . Master of the . sitar. , master performer of . Hindustani raga. Passed away shortly after the textbook was published. Chapter centers on his “global .

From Raga to Bollywood: Developments and Intercultural Crossings in Indian Music

By: Prof. P. N. Shankar PREFACE In the normal course of events, an amateur who builds or acquires a telescope will use it initially to observe theMoon and the planets. After the thrill of seeing the c