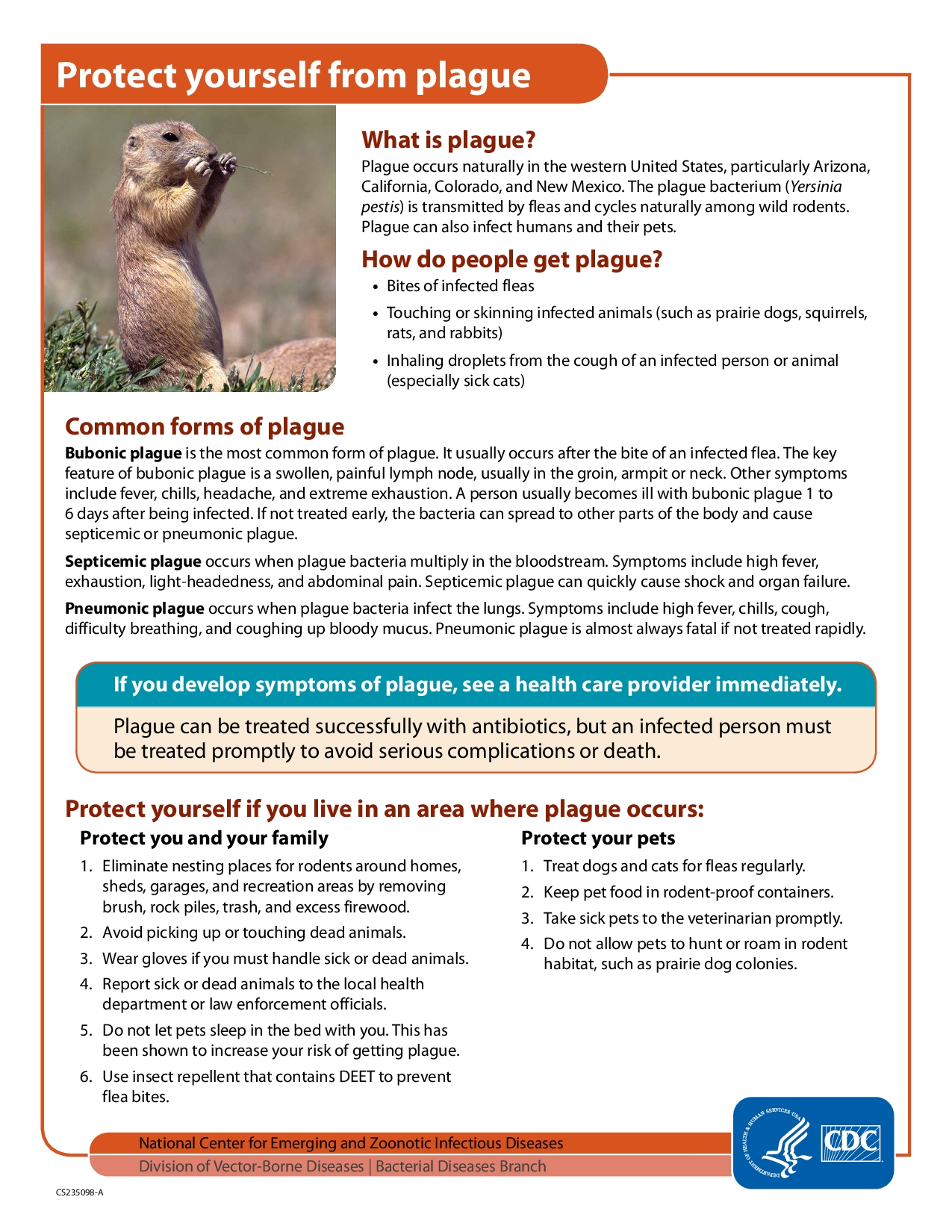 RESTRAINT AND SECLUSION OF STUDENTS

Percent of the State

1 National Center for Emerging and Zoonoti
National Center for Emerging and Zoonotic Infectious DiseasesDivision of Vector-Borne Diseases | Bacterial Diseases Branch Protect yourself from plague What is plague? Plague occurs naturally in the western United States, particularly Arizona, California, Colorado, and New Mexico. The plague bacterium ( Yersinia pestis ) is transmitted by fleas and cycles naturally among wild rodents. Plague can also infect humans and their pets. How do people get plague? Bites of infected fleas Touching or skinning infected animals (such as prairie dogs, squirrels, rats, and rabbits) Inhaling droplets from the cough of an infected person or animal (especially sick cats) Common forms of plague Bubonic plague is the most common form of plague. It usually occurs after the bite of an infected flea. The key feature of bubonic plague is a swollen, painful lymph node, usually in the groin, armpit or neck. Other symptoms include fever, chills, headache, and extreme exhaustion. A person usually becomes ill with bubonic plague 1 to 6 days after being infected. If not treated early, the bacteria can spread to other parts of the body and cause septicemic or pneumonic plague. Septicemic plague occurs when plague bacteria multiply in the bloodstream. Symptoms include high fever, Pneumonic plague occurs when plague bacteria infect the lungs. Symptoms include high fever, chills, cough, difficulty breathing, and coughing up bloody mucus. Pneumonic plague is almost always fatal if not treated rapidly. If you develop symptoms of plague, see a health care provider immediately. Plague can be treated successfully with antibiotics, but an infected person must be treated promptly to avoid serious complications or death. Protect yourself if you live in an area where plague occurs: Protect you and your family 1. Eliminate ne

2 sting places for rodents around homes,
sting places for rodents around homes, sheds, garages, and recreation areas by removing brush, rock piles, trash, and excess firewood. 2. Avoid picking up or touching dead animals. 3. Wear gloves if you must handle sick or dead animals. 4. Report sick or dead animals to the local health department or law enforcement officials. 5. Do not let pets sleep in the bed with you. This has been shown to increase your risk of getting plague. 6. Use insect repellent that contains DEET to prevent flea bites. Protect your pets 1. Treat dogs and cats for fleas regularly. 2. Keep pet food in rodent-proof containers. 3. Take sick pets to the veterinarian promptly. 4. Do not allow pets to hunt or roam in rodent habitat, such as prairie dog colonies. CS235098-A Plague in Humans Human plague is often preceded by an outbreak or “epizootic” in which large numbers of susceptible rodents die. When this happens, hungry infected fleas leave the dead rodents and seek blood from other hosts, including humans and domestic pets. Studies suggest that in the southwestern U.S. epizootics are more likely to occur during cooler summers that follow wet winters. Humans and domestic animals that are bitten by fleas from dead animals are at risk for contracting plague, especially during an epizootic. Cats usually become very ill from plague and can directly infect humans when they cough infectious droplets into the air. Dogs are less likely to be ill, but they can still bring plague-infected fleas into the home. In addition to flea bites, people can be exposed while handling skins or flesh of infected animals. For more information, please contact: Centers for Disease Control and Prevention 3156 Rampart Road, Fort Collins, CO 80521 Telephone: 1-800-CDC-INFO (232-4636)/TTY: 1-888-232-6348 Web: www.cdc.gov

Ticks and Lyme Disease How to prevent tick bites when hiking and camping Ticks can spread disease, including Lyme disease. Protect yourself: Use insect repellent that contains 20 - 30% DEET. Wear clo

How to prevent tick bites when golng Ticks can spread disease, including Lyme disease. Protect yourself: Use insect repellent that contains 20 - 30% DEET. Wear clothing that has been treated with per

Mosquito life cycle Aedes aegypti AdultEggsLarvaPupa The Aedes mosquitoes have 4 life stages: egg, larva, pupa and adult. Mosquitoes can live and reproduce inside and outside the home. The entire

Example:Your hospital administrators have asked you to provide a statistical measure comparing your facility’s CDI experience to the national CDI benchmarkfor the last two quartersof 2012. u are

National Center for Emerging and Zoonotic Infectious DiseasesOffice of

West Nile Virus (WNV) Fact Sheet What Is West Nile Virus? West Nile virus infection can cause serious disease. WNV is established as a seasonal epidemic in North America that ares up in the sum