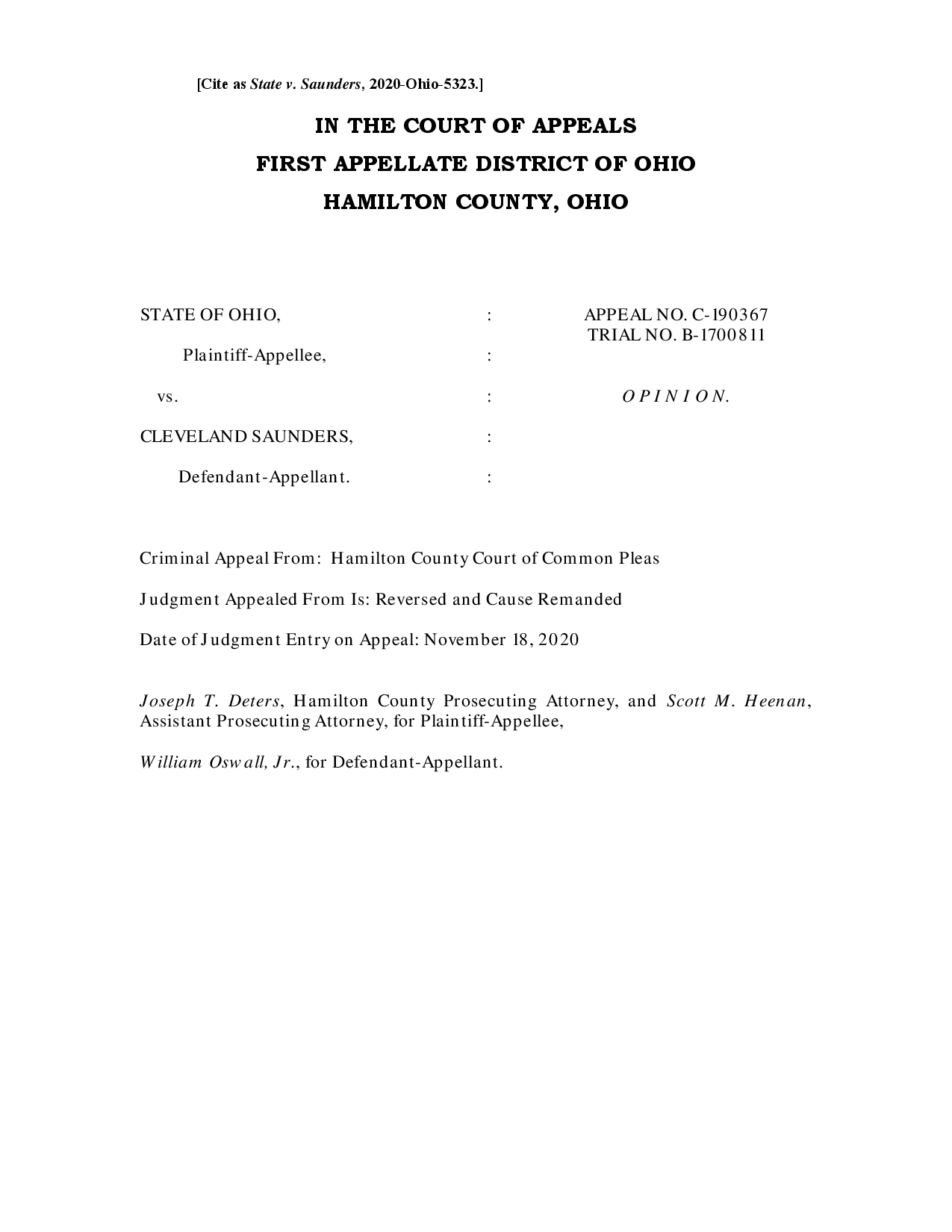 1 OHIO FIRST DISTRICT COURT OF APPEALS IN
OHIO FIRST DISTRICT COURT OF APPEALS INKLERDefendant-appellant Cleveland Saunders appeals his convictions for murder and carrying concealed weapons. In the second of six assignments of error, Saunders argues that the trial court erred by permitting the state to exercise a peremptory challenge to excuse a black juror after the state admitted the challenge was race based. The Equal Protection Clause of the Fourteenth Amendment to the United States Constitution forbids prosecutors from exercising peremptory challenges in a racially discriminatory manner, which includes strikes motivated by the “assumption” or “intuitive judgment” that black jurors cannot be impartial in the criminal trial of black defendants because of their shared race. See Batson v. Kentucky, 476 U.S. 79, 97, 106 S.Ct. 1712, 90 L.Ed.2d 69 (1986). Because the state presented a race-based reason for challenging a black juror during Saunders’s trial, the trial court committed clear error by allowing the strike. Therefore, we must reverse Saunders’s convictions and remand for a new trial. Batson Issue {Â¶3}In Batson, the United States Supreme Court set forth a procedure for evaluating claims of racial discrimination in the use of peremptory strikes at criminal trials. Generally, “once a prima facie case of discrimination has been shown by a defendant, the State must provide race-neutral reasons for its peremptory strikes. The trial judge must determine whether the prosecutor’s state

2 d reasons were the actual reasons or ins
d reasons were the actual reasons or instead were a pretext for discrimination.” Flowers v. Mississippi, ___ U.S. ___, 139 S.Ct. 2228, 2241, 204 L.Ed.2d 638 (2019), citing Batson at 97-98. The “ultimate inquiry” under Batson is whether the prosecutor was “motivated in substantial part by OHIO FIRST DISTRICT COURT OF APPEALS 3 discriminatory intent” when challenging the particular juror. (Internal quotation marks and citation omitted.) Flowers at 2244. {Â¶4}As an appellate court, we will not reject the trial court’s ruling on the issue of discriminatory intent unless it is “clearly erroneous.” Id.State v. Richardson, 1st Dist. Hamilton No. C-030453, 2005-Ohio-530, ¶ 3. {Â¶5}The dispute in this case involves prospective juror number 5 (“Juror 5”). Like Saunders, Juror 5 is black. During voir dire, when questioned by the prosecutor, Juror 5 indicated that her brother and brother-in-law had been “just[ly]” convicted of murder after fair trials over 45 years ago and had turned their lives around after their release from prison over 20 years ago. She further indicated that nothing about their situation would affect her ability to sit on the jury and that she could be fair and impartial. Later, when defense counsel elicited from Juror 5 “something interesting about [her]self that [wa]s not on the [juror] questionnaire,” she shared several facts, including that she had “23 grandchildren.” The prosecutor subsequently exercised peremptory challenges

3 against two potential jurors, including
against two potential jurors, including a black woman, and then exercised a peremptory challenge against Juror 5. Afterwards, the following exchange took place at a sidebar: [Defendant’s Counsel]: * * * Judge, the State’s indicated they’re excusing, once again, an African-American. This is clearly a violation of the equal protection clause, and we’re making a Batson challenge. We now have a pattern of two African-Americans. We’re making a prima facie case, because they’re a member of a protected class and they’re excusing them. OHIO FIRST DISTRICT COURT OF APPEALS [Prosecutor]: Judge, on the questionnaire [sic] indicates and she indicated during voir dire that she has not only a brother-in-law who committed a murder, but also a brother who committed a murder[,] two separate offenses, two separate victims, two separate types. In addition to that she also has 23 grandchildren. The State has some fear that she will empathize with the defendant who is a young African-American male and would allow her sympathies to enter into her deliberations, not only because of her grandchildren but because of the two people convicted of the very crime that we’re trying here. The Court: Okay. [Defense Counsel]: Judge, clearly, that’s a violation of BatsonWhat the State is saying is they don’t want an African-American to have sympathy for an African-American defendant. That’s what Batson is supposed to protect. There has been no explanation given that i

4 s a legitimate reason to excuse someone
s a legitimate reason to excuse someone and resubmit our objection. [The Prosecutor]: Our reason is because she has 23 grandchildren. No matter what race they may be, the defendant is a young man. She’s going to have sympathy for him. The Court: Okay. Overruled. Analysis To show a violation of the federal Equal Protection Clause, the defendant must prove a racially discriminatory purpose. Hernandez v. New York OHIO FIRST DISTRICT COURT OF APPEALS 500 U.S. 352, 360, 111 S.Ct. 1859, 114 L.Ed.2d 395 (1991). The Batson Court explained that the state cannot, consistent with the Equal Protection Clause, exclude black persons from the jury “on the assumption that blacks as a group are unqualified to serve as jurors” nor “on the assumption that they will be biased in a particular case simply because the defendant is black.” Batson, 476 U.S. at 97, 106 S.Ct. 1712, 90 L.Ed.2d 69. Thus, a challenge to a juror of the defendant’s race “on the [prosecutor’s] assumption—or [] intuitive judgment—that thent—that thepartial to the defendant because of their shared race,” is an improper, race-based reason for the strike. . at 97; Richardson, 1st Dist. Hamilton No. C-030453, 2005-Ohio-530, at ¶ 77-79. Here, the parties disagree as to whether the state gave a race-based reason for its challenge to Juror 5. A prosecutor’s explanation in step two of the Batson procedure will be deemed race neutral “[u]nless a discriminatory intent is inherent in the pro

5 secutor’s explanation.” HernandezSaunde
secutor’s explanation.” HernandezSaunders maintains the prosecutor’s explanation falls under the shared-race assumption condemned in Batson. To evaluate the race-neutrality of the prosecutor’s explanation, we must determine, after assuming the proffered reasons for the peremptory challenge are true, if the challenge violates the Equal Protection Clause as a matter of law. Hernandez at 359. {Â¶10}The state argues that Juror 5’s family situations prompted the strike and that “race or ethnicity played no role.” The state, however, ignores the reference to the defendant’s race in its explanation and the impact of that reference when challenging a potential juror of the same race. The prosecutor’s reasoning “that [Juror 5] will empathize with the defendant who is a young African American male and would allow her OHIO FIRST DISTRICT COURT OF APPEALS sympathies to enter into her deliberations” involves the shared-race concern condemned Batson{Â¶11}Admittedly, the prosecutor initially presented facially race-neutral reasons, concerning two murders committed by family members, along with the discriminatory purpose to explain the strike. The state’s racial motivation, however, is not excused or made any less discriminatory because one aspect of the explanation was on its face race neutral. The prosecutor chose to strike the juror “at least in part because of, not merely in spite of, its adverse effects on an identifiable group.” (Internal citations om

6 itted.) Hernandez, 500 U.S. at 360, 111
itted.) Hernandez, 500 U.S. at 360, 111 S.Ct. 1859, 114 L.Ed.2d 395. The prosecutor attempted to retract the impermissible race-based reasoning, but to accept that effort under the circumstances would render the Batson decision meaningless. See Batson, 476 U.S. at 98, 106 S.Ct. 1712, 90 L.Ed.2d 69. Thus, we conclude that a discriminatory intent was inherent in the prosecutor’s explanation for the challenge to Juror 5. Id. at 97-98. The United States Supreme Court in Flowers recently reiterated the importance of the Batson procedure in “eradicat[ing] racial discrimination from the jury selection process,” thereby “protect[ing] the rights of [criminal] defendants and jurors” and “enhanc[ing] public confidence in the fairness of the criminal justice system.” Flowers, ___ U.S. ___, 139 S.Ct. at 2242, 204 L.Ed.2d 638. The FlowersCourt further emphasized “the job of enforcing Batson rests first and foremost with trial judges.” . at 2243. Because “America’s trial judges operate at the front lines of American justice[,] [i]n criminal trials, trial judges possess the primary responsibility to enforce Batson and prevent racial discrimination from seeping into the jury selection process.” . OHIO FIRST DISTRICT COURT OF APPEALS {Â¶13}In this case, the prosecutor presented an inherently raced-based explanation for challenging Juror 5. The trial court responded “okay,” without further inquiry, and ultimately allowed the strike, even though Saunders e

7 stablished that the prosecutor’s challen
stablished that the prosecutor’s challenge was “motivated in substantial part by discriminatory intent.” (Internal quotation marks and citation omitted.) Flowers at 2244. Thus, the trial court’s acceptance of the state’s explanation and its denial of Saunders’s equal-protection claim was clearly erroneous. Richardson, 1st Dist. Hamilton No. C-030453, 2005-Ohio-530, at ¶ 79. {Â¶14}Consequently, we sustain Saunders’s second assignment of error, reverse the trial court’s judgment, and remand this cause for a new trial. Because of our disposition of Saunders’s second assignment of error, his remaining assignments of error are moot and we do not address them. See App.R. 12(A)(1)(c). Judgment reversed and cause remanded. OCKP.J.,andERGERONJ.,concur. Please note: The court has recorded its own entry on the date of the release of this opinion. [CLte as State v. Saunders 2020-OKLo-5323.]IN THE COURT OF APPEALS FIRST APPELLATE DISTRICT OF OHIO HAMILTON COUNTY, OHIO STATE OF OHIO, Plaintiff-Appellee, CLEVELAND SAUNDERS, Defendant-Appellant. APPEAL NO. C-190367 TRIAL NO. B-1700811 O P I N I O N.Criminal Appeal From: Hamilton County Court of Common Pleas Judgment Appealed From Is: Reversed and Cause Remanded Date of Judgment Entry on Appeal: November 18, 2020 Joseph T. Deters, Hamilton County Prosecuting Attorney, and Scott M. HeenanAssistant Prosecuting Attorney, for Plaintiff-Appellee, William Oswall, Jr., for Defendant-Appell

Download - The PPT/PDF document "OHIO FIRST DISTRICT COURT OF APPEALS" is the property of its rightful owner. Permission is granted to download and print the materials on this web site for personal, non-commercial use only, and to display it on your personal computer provided you do not modify the materials and that you retain all copyright notices contained in the materials. By downloading content from our website, you accept the terms of this agreement.